A massive first game for MAD, with victory putting their fate at Worlds back into their hands. Defeat, however, would mean they’d need to win their remaining two games or face not a single EU side making it out of Groups. 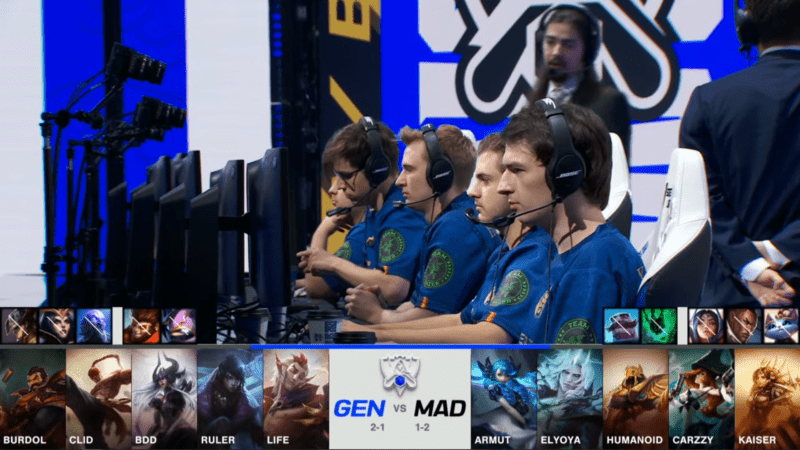 First Blood went over to GEN, but it was quickly traded back over to MAD as a brawl broke out behind the Rift Herald. For a game with a slow early game, we got five kills in a matter of seconds as GEN moved 1k gold ahead. Another fight around the Rift Herald, this time MAD came away with a lead in the fight, however, Ruler was left alone in the bot lane to gain turret plates. The first uncontested kill came on the top side, as MAD picked up a kill and a tower, though the gold lead remained the same.

Slowly, as the teams approached the Baron spawning, GEN started to turn the screw across the map. The lead was still just 1.5k, however, GEN had much better map control. The drake spawned, and MAD gave it up to GEN, as they claimed their third of the game. A bold play by MAD as they stole again a Baron from underneath GEN. MAD moved to claim the drake, and did stop GEN in their attempt to claim the Soul drake. On the back of that fight, MAD took down two members of GEN as the gold lead swung to MAD.

Back and forth with everything on the line

The next Baron spawned, and the early fight went the way of GEN, but MAD managed to stay in the fight as it went three-for-two in favor of GEN. The Baron crucially wasn’t taken. Later, MAD reengaged onto the Baron and claimed it, but GEN were able to claim the Soul drake in return, with MAD too indecisive to stop them.

Afterward, GEN picked up two massive kills onto MAD after a misplay by two members of MAD. While MAD remained in a gold lead, GEN had reclaimed full control of the map. MAD once again tried to sneak a Baron but this time it was a disaster as GEN stole it. In the ensuing fight, MAD were Ace’d and GEN claimed the victory. GEN moved to 4-1 in the group, as MAD lost the power to control their own fate in it.