Our first of two tiebreakers! Could RGE beat FPX again today, or could FPX recover from their 0-3 second-half? With a game against C9 awaiting whoever won, it was all to play for. 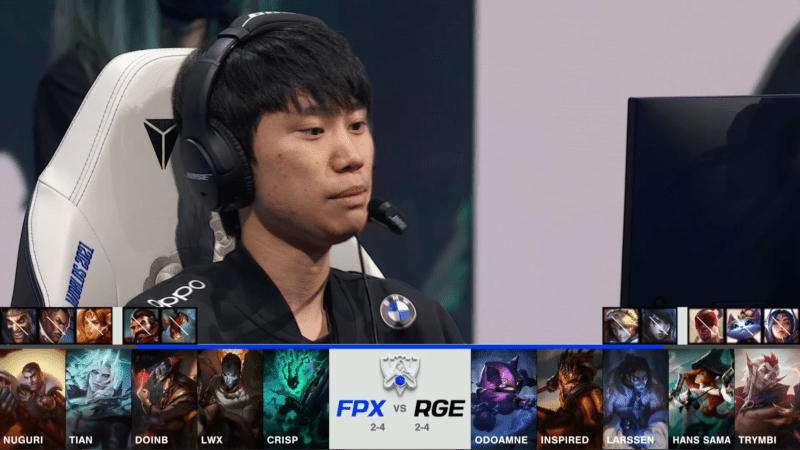 Everything was on the line for these two teams here. RGE picked up First Blood in the top side, however, FPX were able to get two back to recover the play, moving into a gold lead in the process. Top side saw a 3v4 in favor of RGE but nothing happened despite Hans Sama coming under pressure in the bottom lane. RGE managed to get a double kill on the bot side as they maintained the even gold share.

Not too much later, RGE claimed two more kills, one in the top and one in the bot side of the map. With this, they moved into a gold lead against the former World Champions. By 16-minutes, we found ourselves in a position where the game was even on gold still, with tensions clearly high. In the bottom lane, FPX dove under the RGE tower to look for kills, but RGE were able to react faster and win the fight. RGE traded up four-for-one in kills and took a massive lead with Baron spawning. Knowing that, RGE found a pick in the mid lane and used that to push for the Baron. It was a 50/50 but RGE were able to claim it in the end. RGE used the Baron to clear out the FPX outer towers and secure a 5k gold lead with the third drake spawning.

At around this point, a massive mid-lane fight broke out and it once again went the way of RGE. They took down three members of FPX for just one in return. With Baron dropping off, they only claimed the Inhibitor towers before they postured for drake. Here, RGE won another fight on the bot side after claiming the drake, and with the second Baron about to spawn, RGE moved towards it. They forced a battle on the FPX bot side, claiming an Inhibitor in its wake. During the Baron buff, RGE slowly gained advantages on the map and were ready for the Soul drake that spawned on the map at 32:40.

Inevitably, a fight erupted at the Soul drake and it was RGE once again that claimed it. A clean Ace on FPX led to a swift RGE victory. With the LPL representatives and pre-tournament favorites falling, RGE set themselves up for a game against C9 for a spot in the Knockout Stage.