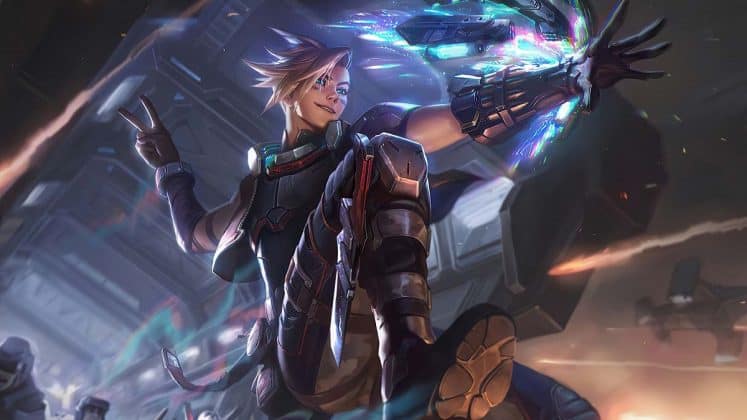 Everything you need to know about Ezreal, the Prodigal Explorer.

Ezreal is one of League of Legends' most unique ADC champions, boasting mobility, poke and good scaling in a very fun kit. On top of that, he has a likeable character design, a unique playstyle and a ton of excellent skins. He's one of the most popular champions in the game for all of these reasons, meaning it's also important to know how to play against him too. There's plenty of reasons to learn about and play Ezreal, so let's dive into it. 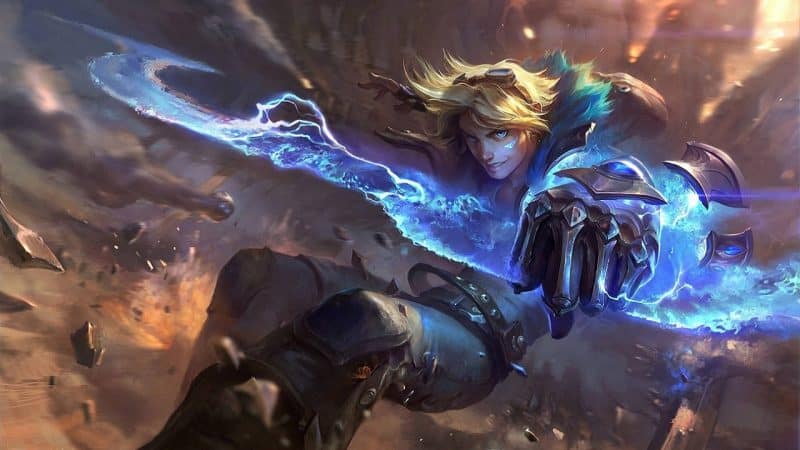 Ezreal is the true definition of an adventurer and explorer. He was born in the well-off city of Piltover, known for its economic prosperity and scientific advancements. His parents were archaeologists that held some level of fame in their time. However, because of this, they left him alone much of the time and it fell to his Uncle Lymere to raise him. Though Ezreal only dreamed about joining his parents on awesome adventures, his uncle forced him into strict schooling.

But, to Lymere's dismay, Ezreal is essentially a genius. He barely had to study for his exams and passed them with flying colors. Because of this, he had ample time to cause mischief around his campus and develop adventuring-oriented skills, like sneaking and lockpicking. During this time, whenever his parents came home, Ezreal's father told him about a lost tomb that belonged to a Shuriman tyrant by the name of Ne'Zuk. The legends said this Ne'Zuk possessed teleportation powers of some type.

Eventually, Ezreal's parents never returned, and the worst was assumed. Ezreal couldn't accept their death and gathered all the information he could about this lost tomb of Ne'Zuk. Eventually, after a long journey, he found the tomb. In it, all he found was a single magical gauntlet, which he naturally wielded and used as magical traps were set off inside the tomb to blast and teleport his way out. Quite the tool for exploring, he thought.

After this, Ezreal's goal was to find his parents by becoming the greatest adventurer in the world. Now, he travels across every region to find fame and fortune, building his reputation all the while. 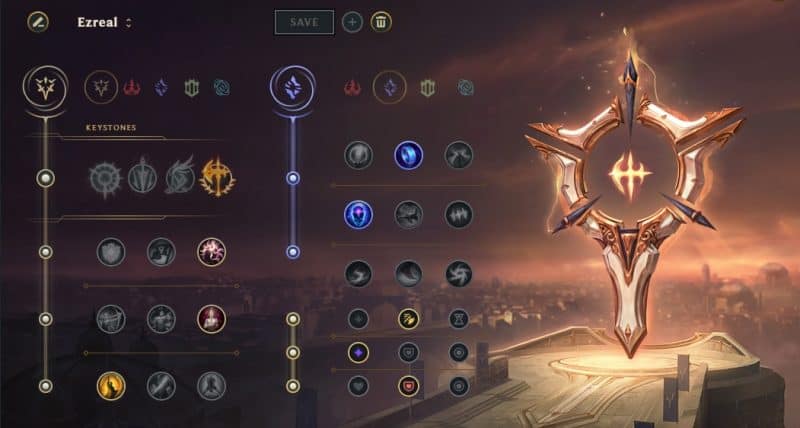 While Ezreal is fairly versatile in his runes, the Conqueror primary tree with Sorcery secondary is ideal. Ezreal's poke is strong enough with his Mystic Shot (Q) already, so running Conqueror as your keystone provides some potency for longer, drawn-out fights. Seeing as Ezreal can sling abilities out and weave auto attacks in between them, Conqueror stacks fairly quickly to provide more stats and decent healing.

It's also important to note that taking Presence of Mind in the Precision tree and Manaflow Band in the Sorcery tree gives Ezreal a ton of mana. Because he tends to spam a lot of abilities, mana is very important. As will be discussed later, his build helps with this as well, but these two runes are crucial for letting Ezreal players make the most out of the champion. 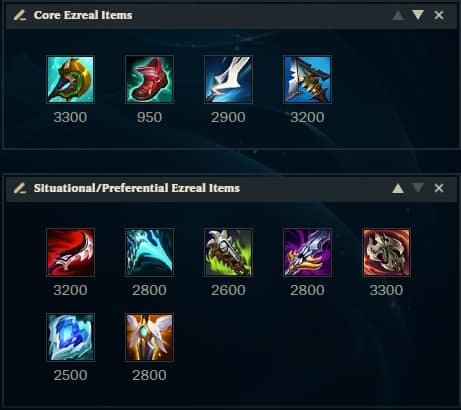 As mentioned before, Ezreal has a lot of versatility in his build. Currently, in patch 11.11, his best Mythic item to build is Divine Sunderer. It gives Ezreal the Sheen passive, enhancing his autos after ability casts, and increases his already-potent poke damage. With this are CDR boots, fantastic for allowing him to toss out abilities constantly. Then is his mana item, Manamune. The component item to this, Tear of the Goddess, is crucial to buy at the start of the game, or early on, to stack up. Last in the core is Serylda's Grudge, which applies a slow onto champions he hits with his attacks and Q's. This slow is terribly annoying to enemies and makes kiting a whole lot easier.

Though Divine Sunderer is excellent, some players enjoy a build with even more damage. This build's two core items are Duskblade of Draktharr and Essence Reaver. Essence Reaver provides the Sheen passive and some mana regeneration Ezreal needs. But Duskblade offers more damage with lethality and the fun invisibility passive. While this isn't as reliable as the standard build, it can be quite fun and pop off harder against squishy teams.

Finally, we come to situational items. Simply put, Maw of Malmortius is good into heavy-AP teams, while Frozen Heart and Guardian Angel are options into heavy AD. On the other hand, Chempunk Chainsword is a must when up against healing champions. If you want some extra wave clear and healing, then Ravenous Hydra is viable too. 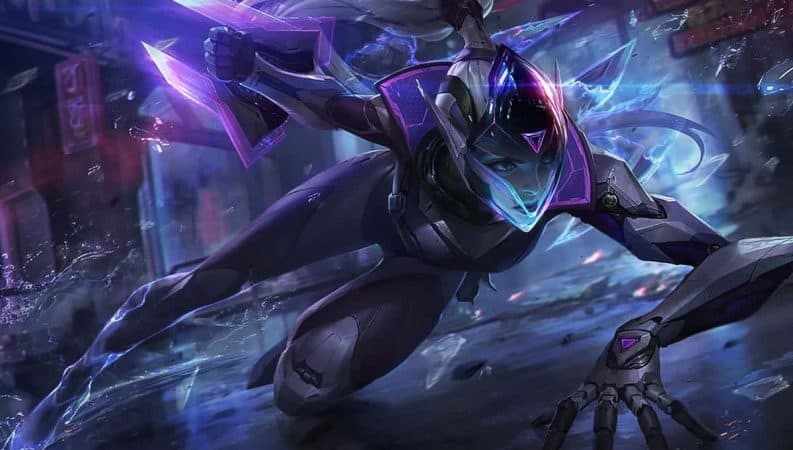 Because of Ezreal's long-range kit and ability to blink away with Arcane Shift (W), he is a hard champion to punish. Still though, he does have some definite counters that do well into him.

As of patch 11.11, the two best marksmen against Ezreal are Sivir and Vayne. This is largely because Ezreal, though he has safety, can't always punish his opponents in lane. Sivir and Vayne are two scaling hyper-carries that typically need to be punished in lane, lest they take over the game. Because their lane phase against Ezreal is typically pretty easy, they get the gold and items they want and need. Then, they outscale Ezreal and can either 1v1 him or outshine him in team fights. If Vayne or Sivir don't tickle your fancy, Twitch, Ashe and Jhin also tend to have favorable matchups.

There are also some unconventional picks like Swain and Yasuo. Despite them being strange bot lane picks, they have pretty good win rates into him, but for different reasons. Swain is essentially impossible for Ezreal to kill after level six, and if paired with a CC-heavy support, can keep Ezreal locked down, unable to escape his damage. Meanwhile, Yasuo is a champion filled with dashes that can get on top of Ezreal with the help of minion waves, making it difficult for Ezreal to leverage his ranged advantage. 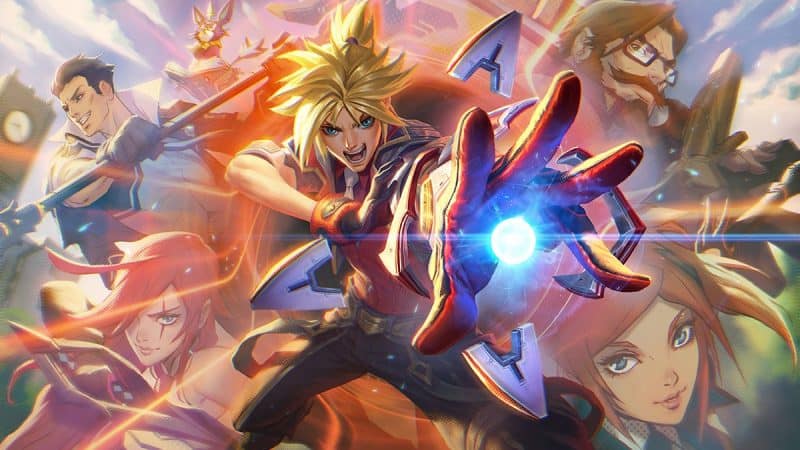 Considering Ezreal is a massively popular champion, it's no surprise Riot Games has made a lot of skins for him. The full list is below, with links to pictures of the splash arts embedded in the name. If you want to see them all together, with Chromas and in-game models, check out the League of Legends Fandom page. 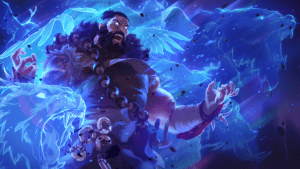