The highly anticipated rematch between the two group favorites, which could very well decide who takes first place in Group B. 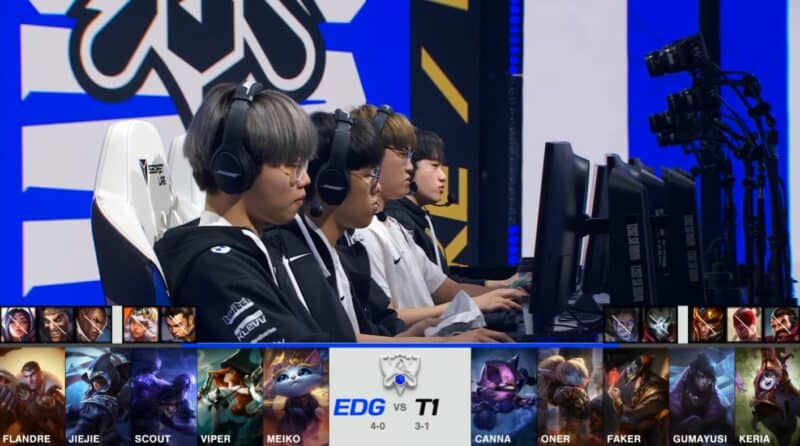 With T1 just one game behind EDG, this was their chance to knock EDG down a peg and contest them for first place in the group. The early game was fairly slow from these two teams, as the first real action to happen was when T1 swapped their bot duo to the top lane to take Herald, then used that to secure the First Tower bonus top. Three minutes later, T1 claimed an Infernal Dragon too, before Faker teleported to the top lane to dive Flandre with Canna and kill him for the late First Blood.

In the driver's seat, T1 kept up the pressure. Though EDG traded back sometimes, T1 knocked towers down and set up for a second Rift Herald. After they took it, a great engage from Oner and Canna got T1 three quick kills. As a result, T1 were able to use the Herald to take two mid lane towers too. The tower trade continued but T1 was always coming out ahead due to dragon takes. At 18 minutes, EDG managed to pick off Keria, but it was too little too late for EDG as T1 put on a clinic against them.

When Baron spawned on the map, T1 clearly had their eyes on it. When EDG attempted to get vision on it, T1 laid in wait and pounced on Jiejie to kill him instantly. Without their jungler, EDG desperately tried to fight T1 at the Baron, but that only served to give them two more kills before they secured the buff anyway. T1 was efficient with the Baron, moving in, pressuring the base and breaking two Inhibitor Towers open. One final fight erupted in the EDG base where T1 once again found kills while losing no members, so with the man advantage, T1 easily pushed the Nexus and closed the game. Depending on the results of the following matches, this set up for a potential tiebreaker for first place at the end of the day.