Undefeated Korean perfectionists DWG KIA look to carry forward their momentum and defend their Worlds title. Meanwhile, the MAD Lions look to topple the giants and keep the hopes of all European fans alive as they take them on in a thriller Knockout Stage match. 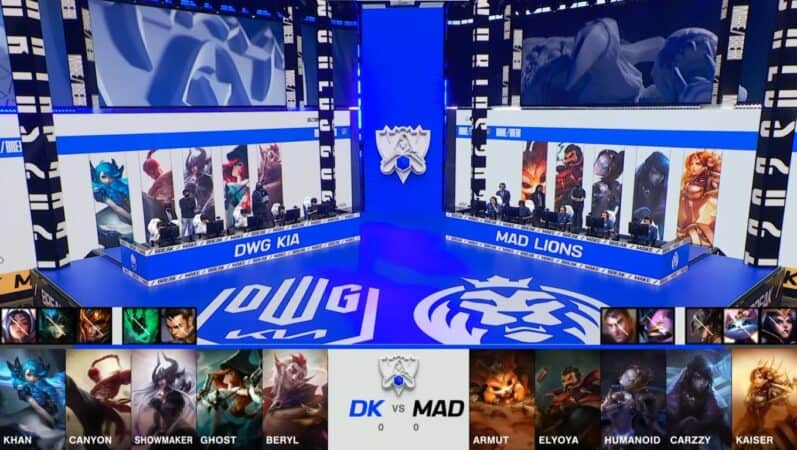 DK started the first match of the series very dominantly as Khan and Showmaker made their intentions clear. The first major team fight broke out down in the bottom lane, where Kaiser secured the First Blood on the enemy support. However, DK got two of their own to go up in kills. MAD responded swiftly by roaming mid lane and getting a kill on Showmaker to stop him from taking complete control of the lane. After that, Kaiser was spotted out of position and Ghost made sure to punish the lonely Aphelios and secure a kill in the bottom lane.

DK looked to punish every MAD mistake after that, and they soon caught them in the river and chased them perfectly, as Beryl made a beautiful prediction to get two more kills to solidify their lead in the match. Afterward, they secured the first dragon of the match too. Then, DK pushed the other waves and started getting individual kills on MAD, while scaling significantly and securing three dragons in the match.

MAD, desperate to come back into the match, made a last-ditch effort near the base. But it was all in vain. DK smashed them, then their Nexus, and looked very intimidating as they took the first match of the series. 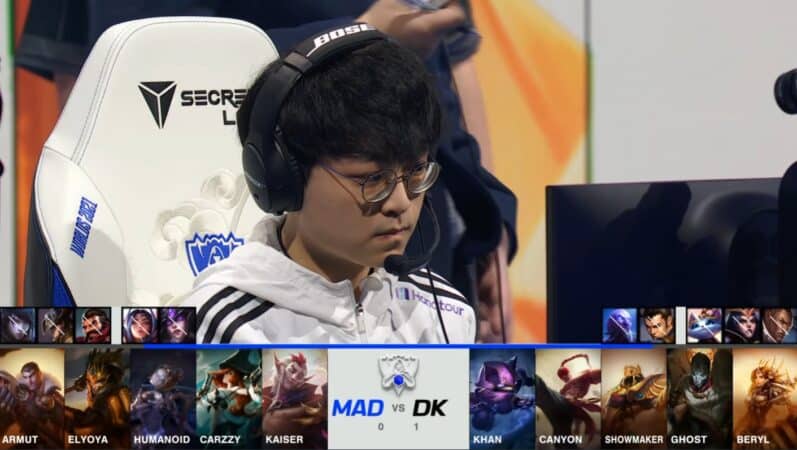 MAD, after securing the Jarvan in the draft phase, looked to proactively make plays in the second match against DK. As expected, Jarvan ganked the top twice in quick succession to get the Flash, then First Blood onto Kennen to put Armut in a commanding position. However, DK also arranged a dive onto Armut under the tower and got one in return. MAD caught Khan's Kennen again and killed him to get a lead. Continuing the aggression, they stacked up at the top side to further push him out of the game soon after. For DK, their support made his way up with Showmaker using his Teleport, however, Humanoid stopped him in his tracks to help MAD win another team fight.

MAD Lions were slowly picking up kills to push DK down into a gold deficit, then kept on pushing their leads by securing objectives. DK realized their late-game scaling and slowly started picking off enemy players in the side lane to gain small but decent gains to come back into the match. However, the gold and the three dragon lead for MAD looked gigantic, meaning it was hard for DK to make any comeback into the match with only small dents. So, they took a huge gamble as they started the Baron and invited MAD to fight them on their terms. MAD went in blind and were punished heavily by a beautiful Azir-Kennen ultimate combo as DK swept the MAD lineup and pushed the top into break into the turrets afterward. Along with that, DK secured the Baron after that team fight and equalized the gold difference.

An epic comeback by DK

MAD was quick to rush to their Mountain Soul and take it down quickly to get a huge boost for the next team fights. But Canyon’s Lee Sin dissected the fight and got a few more kills in the bottom lane as MAD desperately tried to flee the scene. After that, DK’s late-game damage came to fruition as they pushed the waves with Baron Buff and made a catch in the mid lane. MAD was quick to respond and it was a decent fight from them, however, it was Khan’s Kennen ultimate that evaporated the enemy players. After that, they made a final rush and pulled off an incredible comeback to bring the series to the match point. 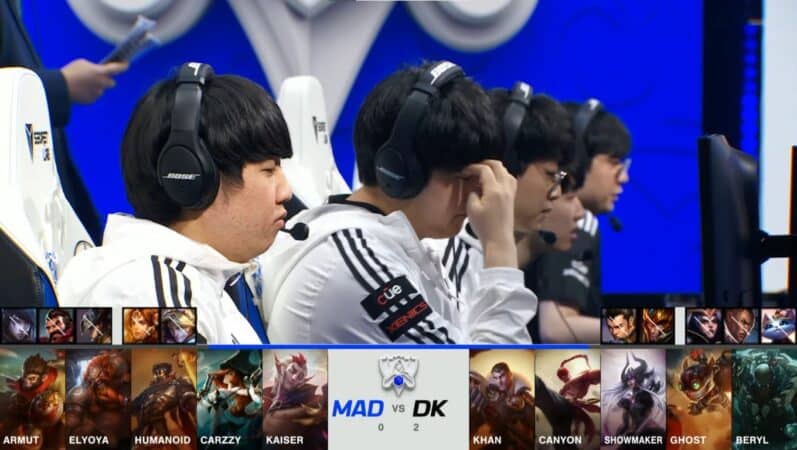 Coming to the third match, DK started off by taking down Armut in the top lane with a dive under the tower. After a few slow minutes, DK again took the strong foot ahead and delivered two blows in the bot and top lanes, while MAD noly salvaged one kill in the top lane. Showmaker arrived late to the party but he got one exit kill to further solidify the lead for DK.

While DK was in a dominating position to take away the series, MAD showed their presence of mind and played the next three team fights very aggressively and secured at least a kill for themselves in each to not fall behind in the match. DK secured the first dragon of the match, and in the next dragon fight, they didn’t overcommit and let MAD take the first initiation of the team fight to overcome them easily. However, MAD wasn’t done. They took more team fights and got some that came out in their favor, especially one near Baron. They called DK’s bluff and took them down by flanking the Baron and Ace'ing the enemy, then securing the Baron.

DK was losing control of the match, though they came back in an astounding fashion by taking down multiple MAD members to nullify the Baron buff. In addition, they had good wave control, which helped them maintain a strong position in the match. After that, fights near objectives were a mere formality, as MAD tried their best to take down some dragons but DK was sharp in their team fights. In them, they took down MAD in each and every team fight. After securing the next Baron, DK pushed in the waves and secured the fourth dragon for the team, giving them the Infernal Soul and a huge advantage to win in the final team fight. Unsurprisingly, DK obliterated MAD and smashed their Nexus to remain undefeated at Worlds 2021.

With this win, MAD is eliminated from Worlds 2021 while DK will move on to face T1 in the Semifinals.