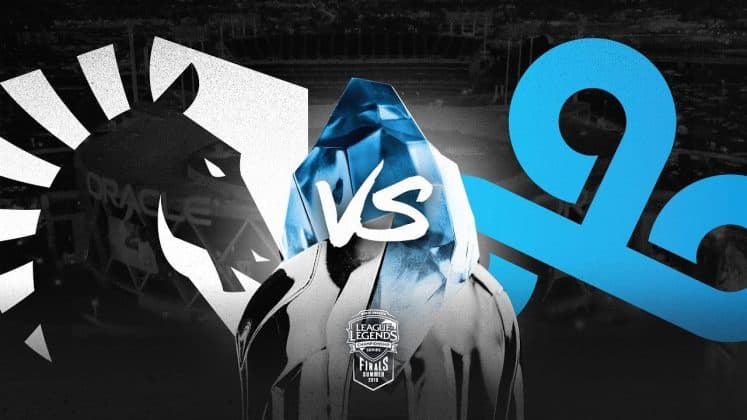 With NA's MSI spot and the MSS trophy on the line, C9 and TL took to the Rift.

After weeks of competition, Cloud9 and Team Liquid stand on the precipice. Both teams had admirable showings in the Spring Split, then went on to replicate that success in the Mid-Season Showdown. This last series decides who will lift the MSS trophy, as well as who will represent North America at the Mid-Season Invitational. The first time, C9 handily defeated TL, which they tried to do again, but TL was undoubtedly out for revenge in this fated Finals series. 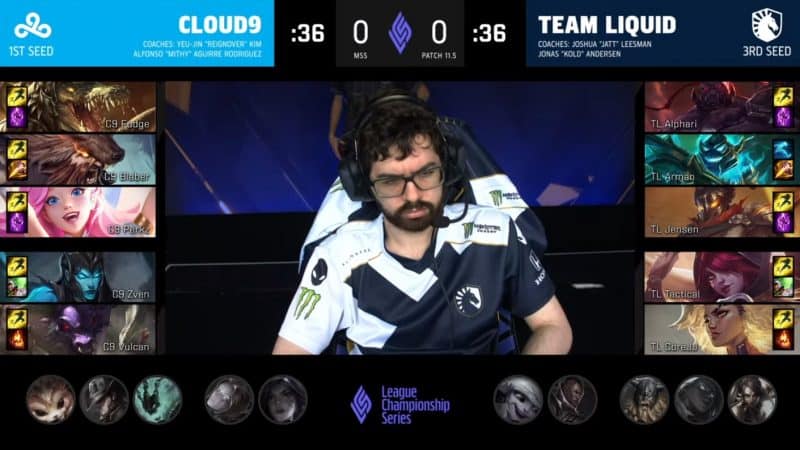 In a series that was expected to deliver the hype, Game One certainly didn't disappoint. Utilizing the early game power of their composition, C9 clawed forward with a huge advantage by 15 minutes. It started with C9 getting two kills in a top side 2v2, then snowballing further with three dragon kills. Everything was looking great for C9, as they dove towers, slew Rift Heralds and knocked down towers.

That was until a misplay in the top lane. Here, C9 was too aggressive and lost a few members. This was exactly what the TL squad needed to gain their footing. As at 23 minutes, C9 attempted to secure their Cloud Soul, but TL's substitute jungler Armao stole it away and helped his team pick up two kills and a Baron. The momentum had completely swung and it appeared that TL now had a solid hold on the game.

But that didn't last forever either. At 31 minutes, C9 found the perfect engage on TL in the top river, killing four from TL and immediately rushing mid. They wanted to end there, but had to settle for an Inhibitor and kill on Armao. It should've been Baron for C9 there, but TL engaged on them in the pit 4v5 and actually killed two C9 champions. From here, it seemed to be an even match, despite TL's scaling advantages. In the next 10 or so minutes, there were a few scuffles, but no definitive wins.

It all came down to Elder Dragon. Both teams knew it was the game decider and butted heads in front of it. The battle was tense, but Tactical managed to slay the mighty Elder and secure his team the buff. With it, TL obliterated C9 and finally had the opportunity to destroy their Nexus after a 50-minute slugfest. 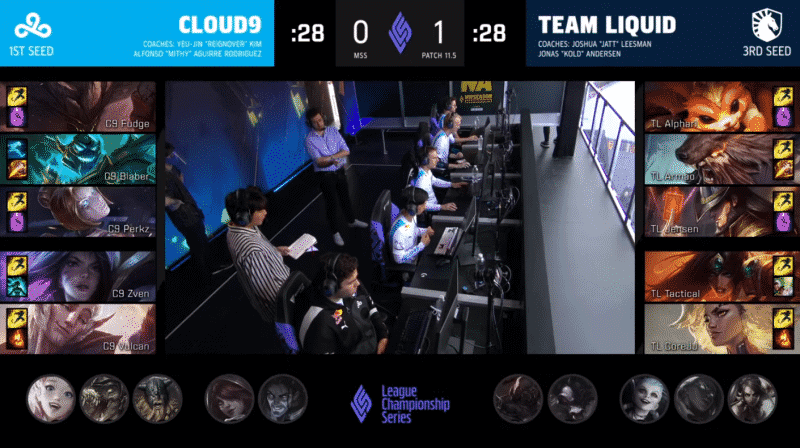 Like Game One, Game Two was a back-and-forth brawl that went to the late game. And the action all began in the top lane, where Blaber made two separate visits to set Alphari back with two deaths. After this, there were some objective trades, but nothing too critical. But C9 ramped up the pressure around 14 minutes, finding Armao in his jungle and catching him out twice. Again, C9 had the early advantage and looked strong.

But then disaster struck for the C9 squad. Using the Twisted Fate ultimate and Alphari's Teleport, they picked off Perkz and Vulcan, then made their way to take an easy Baron. If that wasn't bad enough, TL found a great engage onto Zven to kill him, then win the ensuing team fight four-for-one. Game Two appeared to be cinched for TL, but C9 never stopped fighting. At the 26 minute mark, C9 caught out CoreJJ. Which wasn't the end of the world, but TL stepped too far forward to help their support and C9 ran them down, killing three more members. C9's aggression set them right back into the driver's seat.

MORE FROM ESTNN
LOL: Sivir Update Announced, Coming to the PBE This Week

After this, the game balanced on a knife's edge. C9 won one 33 minute team fight, which netted them four kills, a Baron and two Inhibitors eventually. But they couldn't end it there. This gave TL more chances, which they actually capitalized on, as they won a fight in the top lane two-for-one. However, C9 felt good still, so at 40 minutes, they rushed Baron Nashor. TL didn't manage to find the engage they needed, so C9 rushed them and crushed them underfoot. After four kills, C9 swiftly ended the game and brought the series score to 1-1. 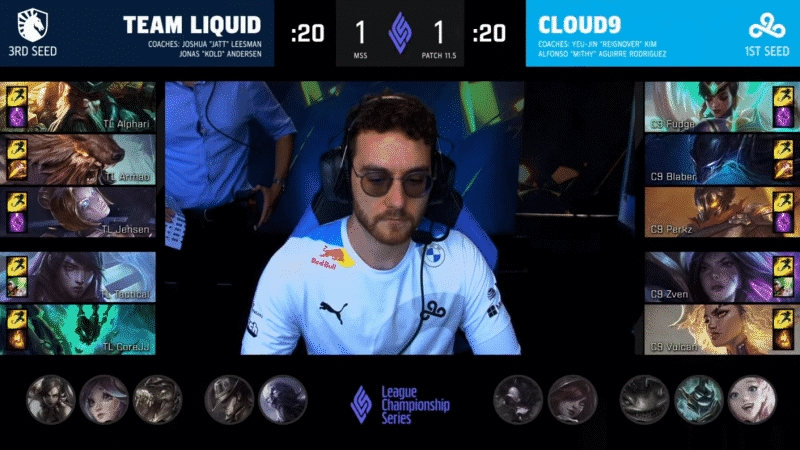 This series gifted us with an incredibly even matchup, and Game Three was no different. Blaber, using the same formula from the last two games, ganked top early on to secure First Blood on Alphari. Unfortunately, Armao ran in after his top lane died and gifted another kill to C9. But TL was very proactive after this. They claimed two dragons, the Rift Herald and multiple plates while Tactical and CoreJJ dodged Nocturne ganks and held the bot lane down.

At 18 minutes, TL forced a great fight in the top river, where they picked up three kills and their third dragon afterward. Cloud9 wasn't ready to roll over though, as they forced a play onto Jensen and killed him. Despite the slight momentum swing, TL was still in the lead, so they felt a Baron attempt was in the cards. They burned it down but C9 cleaned up four kills on the backside of the play.

With only one Baron buff standing, it produced few results and the game stagnated. At 23 minutes, C9 managed to keep TL from gaining Ocean Soul, but not from starting Baron at 27 minutes. It looked like TL would kill it too quickly, but Blaber miraculously flew into the pit and stole the buff away. C9 had the miracle they needed, but it wasn't enough, because the game stayed at a stalemate until TL dominantly won a team fight near dragon, killing all five C9 champions. With this, it was simple for TL to push, blast the Nexus and bring C9 to match point. 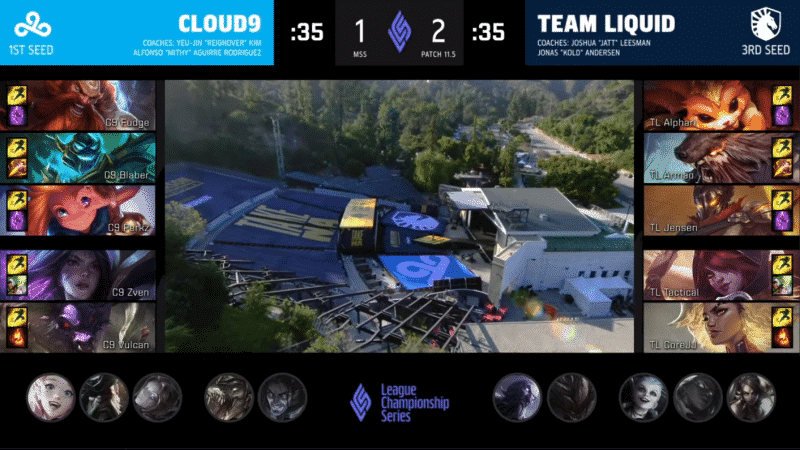 C9's backs were against the wall after a loss in Game Three, and hence fell back on more standard picks and a more reserved playstyle. In fact, this game overall was very reserved, with slow, methodical play dictating the pace. As he did all series, Blaber ganked Alphari in the top lane for the customary First Blood. But after that, things were different than before. There were no kills for about 20 minutes. Instead, C9 utilized lane pressure to secure a series of objectives, and while TL snagged a couple of their own, C9 slowly carved out a decent lead.

The first team fight came at 26 minutes, around Cloud9's Mountain Soul dragon. Though it went three-for-three in kills, C9's carries in Perkz and Zven were alive, so they secured the prized Soul. C9 was at a point of power, though they did lose two members and a Baron as the result of a team fight. This didn't matter too much, as TL couldn't leverage this momentum shift. That was all well for C9 because at 33 minutes, they found another great team fight to secure five kills and the Elder Dragon. Baron Nashor fell victim to C9 shortly after.

Empowered with both major buffs, C9 set to work on TL's base. Keeping with their methodicalness, they chipped away at Inhibitors until all three fell. TL attempted to force a last miracle fight with Alphari's Teleport, but C9 routed them and picked up the Ace. Marching into their opponent's base, C9 made short work of their Nexus and delivered fans a coveted Game Five. 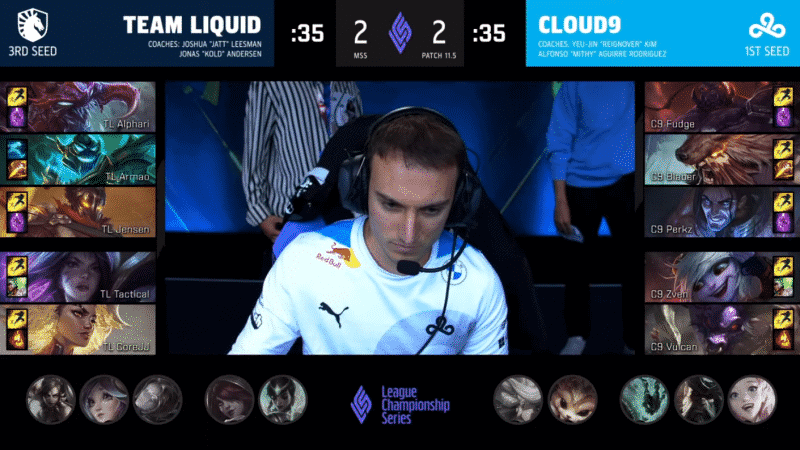 It might've looked close in the beginning of this series, but after a methodical win in Game Four, Cloud9 pulled out all the stops in Game Five. They coordinated an incredible level one strategy, where C9's bot duo of Zven and Vulcan went top to punish poor Alphari, who they killed right away. Meanwhile, Blaber invaded the enemy jungle to steal away camps since Fudge's Sion used his zombie form to take two of his camps. This level one, along with finding a kill on Armao in the river at four minutes, gave C9 an absolutely massive lead.

And they didn't let off the gas from here. No slow play this time, as Perkz constantly roamed, getting a kill on Alphari in the top lane at six minutes. C9 used their immense pressure to secure dragons, a Rift Herald and tower plates. The kills didn't stop coming either, as C9 moved as a unit everywhere and caught out TL members when they could. Unfortunately, besides one brief moment where they won a fight two-for-one, TL was simply unable to respond to C9's creativity and aggression.

TL fans held their breaths for a moment in a 16-minute team fight, but spectacular execution from Zven crushed TL's dreams once more. C9 went up five more kills. The deaths kept coming for TL, as a 19-minute team fight saw C9 grab four more kills, then the Baron as soon as it spawned. With it, they took an Inhibitor, but more importantly, the Infernal Soul too. Between the gold lead and Soul, TL couldn't contest C9 at the next Baron. Here, C9 quickly secured it then turned for a team fight, crushing four TL champions underfoot. No hesitation. C9 saw their opportunity and seized it, pushing down the TL Nexus and finishing the series.

After being robbed of an MSI appearance last year, C9 hoists the MSS trophy and claims NA's spot at MSI to prove themselves on the international stage.