For the teams involved, this is their Worlds Final. The most important game of the day. Defeat for Cloud9 would all but send them home, while Rogue would be left with a massive task. 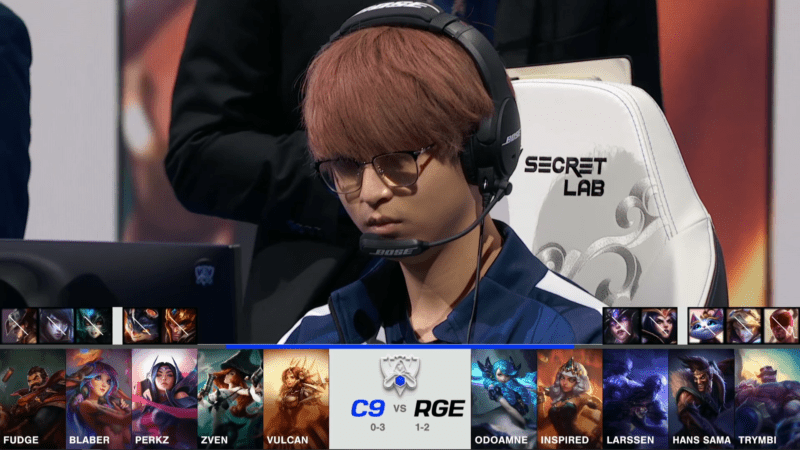 At level one, RGE tried to invade the C9 jungle and it went as badly as possible for the EU side. C9 fought back, picked up the red buff and two kills to go alongside it. While not a kill for RGE, Blaber attempted to dive the RGE top-side, but he ended up being executed to the tower, allowing Inspired to get slightly back into the game. A skirmish kicked off in the mid lane next, which resulted in a one-for-one kill trade after Perkz was caught out. Next up was RGE picking up two massive kills in the bot side of the map, with Larssen Teleporting in to pick up a Double Kill.

At just seven minutes, we’re in for another two kills on the bot side. Firstly, RGE loses one in the jungle before a 4v1 in the bot lane secures a second kill. RGE did manage to turn that into a 3v1 kill for themselves on the top side, though C9 remained 1k ahead. Shortly after that, C9 picked up two more kills on the map, yet again on the bot side, plus a kill top side. C9 chased on the top side, catching out multiple members of RGE and claiming two more kills. They dove the tower, and C9 picked up two more kills as C9 moved 4k ahead by 12:30. Things quieted down slightly as we got closer to Baron spawning. C9 had moved to 6k ahead, snowballing off their level one lead as they prepared for Baron and the late game.

The first real 5v5 of the game, and while RGE found a massive entry kill, C9 were able to flip the fight. They took down three members of RGE before securing the Baron. With Baron, C9 was able to sweep aside the RGE base, knocking down their Inhibitors and taking down the Nexus. It was a massive win for C9 as they looked to keep their Worlds adventure alive. For RGE, it’s the nightmare start, as they now need to beat both FPX and DK to stay in Worlds.