It has all come down to this one single series where all of the players' hard work is at stake. While the obvious favorites of the tournament have been shown the gates, MAD Lions and Fnatic seek to reforge history as we know it today.

MAD Lions, winning the Spring Split this year, have another Final to seal the deal and reign superior to other teams in the LEC. On the other side, Fnatic wasn’t expected to reach Finals this year due to the role swap and a rookie in the top lane. However, they won against all odds and provided plenty of dominant performances in the playoffs.

Will Fnatic start a new era of dominance or will MAD Lions shut down all the haters and become the next best team in Europe? 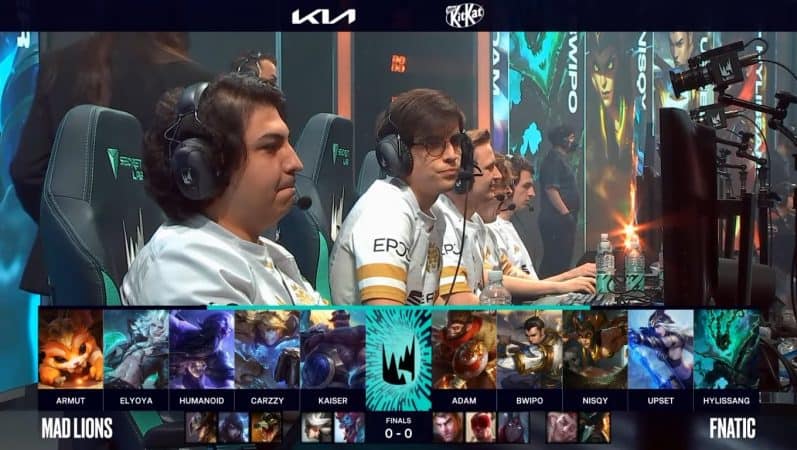 The first match of the series started with a clever gank on the top lane, as Armut let Adam push the wave while Elyoya makes sure MAD Lions get the first blood. Then, Bwipo gets ganked in the mid lane to get another one for the team. Fnatic responded quickly as they got a double kill in the bottom lane. While Fnatic secured the first dragon after that, MAD Lions took a team fight in the river where they took down four members to accumulate a gold lead in the match.

After MAD Lions secured their first dragon, Bwipo took down Elyoya and Kaiser to bring Fnatic back into the match. Humanoid was also caught in the enemy jungle and he got punished by Fnatic. In the next team fight in the top lane, MAD Lions were slowly collapsing on Fnatic, however, Bwipo turned the fight on them and secured two kills to equalize the game. Fnatic secured the next dragon for themselves while MAD Lions looked to take down towers. In the next team fight, MAD Lions barely won it to gain a small lead into the match.

Then, a team fight near the red side jungle broke down. It was too close of a fight, so both of the teams backed out to regenerate and come back. However, Fnatic started baiting Baron as MAD Lions took a bad team fight and lost some of their members. After that, Fnatic didn’t take back down, rushing the Baron and securing it. But MAD Lions made sure that they paid their debt for it as they rushed down the Fnatic side and Humanoid took four of them down with his Ryze. After that, Fnatic tried to force a fight for the Soul dragon but they couldn't do that as MAD Lions won the team fight and secured the Soul for themselves. Then, they marched down the mid lane and easily secured the Nexus to start the series on a strong note. 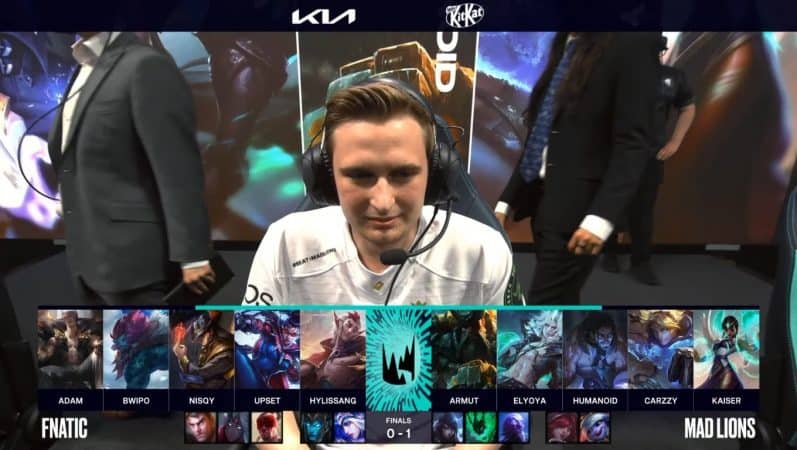 The second match of the series started on a cheesy note as Fnatic and MAD Lions both came to the bottom lane to cheese the enemy. However, Fnatic got the better end of the deal and they secured two early kills. MAD Lions tried to revert back the pressure to the opponents as they got two kills in the mid lane. But Fnatic secured three for themselves here as well. After that, Fnatic, thirsty for blood, looked to dive the bottom lane and executed it picture-perfectly to get up to eight kills by five minutes. Then, Nisqy ganked the top lane for Adam and secured another kill for the team. MAD Lions tried to salvage by trying to get the dragon but Bwipo sensed it and stole the dragon. After which Fnatic won yet another team fight to dominate the match.

MAD Lions tried to pick enemies and get favorable fights but it was the Fnatic show. The pace of the match slowed down for a moment as Fnatic tried to push the waves and gain more win conditions. Fnatic got the second dragon of the match and Fnatic slowly pushed their lead more and played safely. MAD Lions consistently looked for kills and ways to get back into the match.

After the third dragon and Baron was taken by Fnatic, MAD Lions had to look for a fight near the Soul dragon fight. While Fnatic was indecisive in taking the fight, MAD Lions stole the dragon from the back pocket, though ended up losing the team fight. That dragon bought some crucial time for MAD Lions. They made sure to delay the match by pushing the mid wave and chunking Fnatic players so that they couldn't commit to an engagement.

After that, Fnatic was getting impatient so they started the Baron. But MAD Lions were quick to respond and Elyoya stole the Baron from the hands of Fnatic and pushed them to the backfoot. They also took the dragon to delay the Soul dragon for Fnatic. But, Fnatic was determined to find an engagement and they did in the mid lane, where Upset wrapped up three quick kills. Afterward, they wasted no time and went towards the base to end the match to equal the series with MAD Lions. 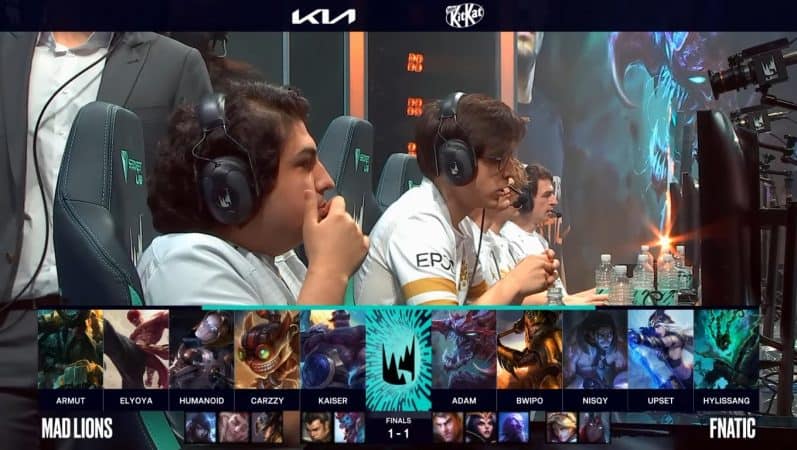 The third game of the series started a bit slower compared to the previous ones. The first major team fight broke down near the first dragon of the match, where Bwipo pushed a bit too deep. MAD Lions punished the enemy jungler, killing him and taking the dragon. After a brief while, Fnatic got one back in the enemy jungle. Fnatic secured the second dragon of the match and they got a 2v2 team fight and won it without losing anyone. Then, there was a bloodbath in the bottom blue-side jungle as Fnatic secured three kills and lost quite a few members. Then, a skirmish in the mid lane gave a window for MAD Lions to come back into the match completely.

Fnatic got their second dragon and gained a bit of tempo. But a great display of patience near the dragon meant MAD Lions got an easy team fight and another dragon to their name. After that, MAD Lions another two kills in the bot lane and it was looking gloomy for Fnatic. There were some back-to-back skirmishes, but MAD Lions got the third dragon of the match and looked very strong. Another strong team fight by MAD Lions made sure that they got the Baron and got a substantial lead over the opponents.

MAD Lions stacked in the bottom lane and took one last fight near the base and won it easily to push through the turrets and take down the enemy Nexus to gain a lead in the series. 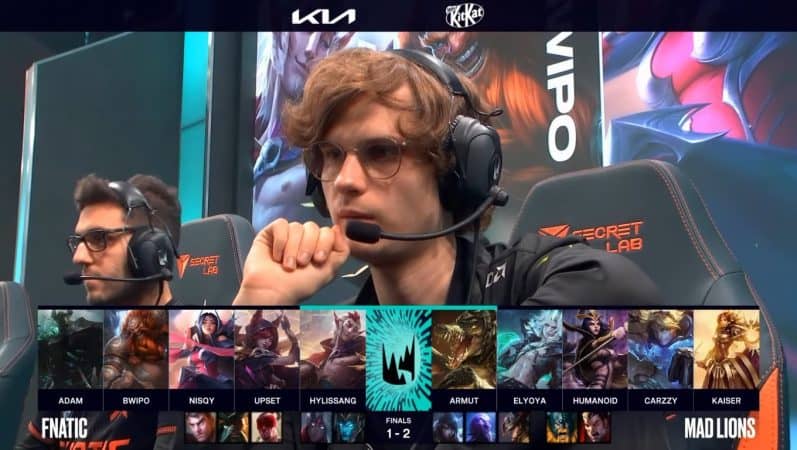 It was match point for MAD Lions. The match started slowly but a Teleport from Nisqy in the bottom lane got Fnatic the First Blood. After that, MAD dove Adam in the top lane but he got one kill in return, making it an equal trade for the team. In the following minutes, there were a lot of skirmishes in the early game with both teams aggressively trading kills. During this time, Fnatic secured the first dragon of the game. After a quiet mid game start, Fnatic respected the Teleport from MAD Lions as they got their first dragon of the match.

MAD Lions got quick separate kills to put themselves in the driver's seat and the match depended on the next team fight near the dragon. But Fnatic did not find the engage they needed and they lost the team fight but they got the dragon as a consolation prize. Afterward, MAD Lions secured the Baron and didn’t take any fight in order to slowly choke Fnatic into taking desperation fights and go even further in lead. MAD pushed all the waves, got some more kills, and eventually another Baron. They waited patiently and Fnatic took a bad fight in the bot lane, where MAD destroyed all their hopes and in the aftermath, won the match in a dominating fashion.

With this win, MAD LIONS are crowned as the champions for the 2021 LEC Summer Split!