Recapping the action between Team Liquid and TSM.

The LCS Championships are well underway, with teams doing all they can to keep their title hopes alive. After an intense five-game series between 100 Thieves and Evil Geniuses yesterday, Team Liquid (“TL”) and (“TSM”) had a tough act to follow. But with so much on the line, both teams were hoping to show up and continue on in the Upper Bracket and not lose any momentum in the buildup towards Finals, and ultimately, the World Championship. 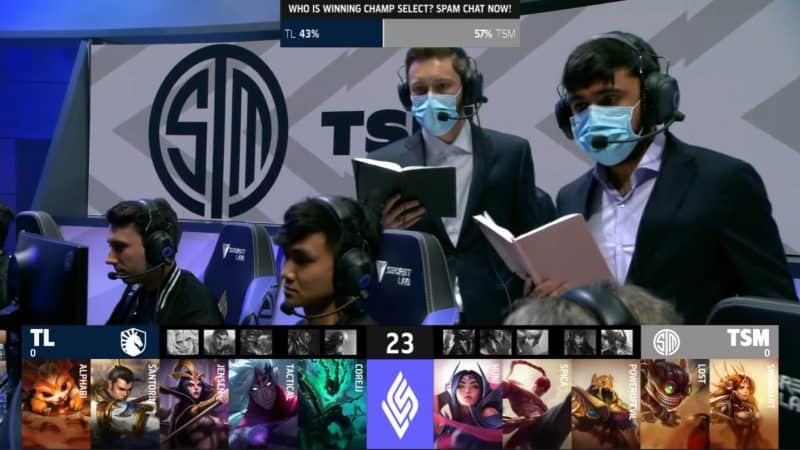 In this highly anticipated matchup between two of NA's top teams, with two aggressively early lane junglers, things weren't as expected in the opening minutes of the game. To their credit, CoreJJ and Tactical did kill SwordArt for First Blood at only two minutes, but after that, the teams were very slow. They seemed to be ready for the other's plays and neither team wanted to break the stalemate.

But once the action started, it didn't stop for long. At 15 minutes, Santorin and his bottom lane dove and killed Lost under his tower. A minute later, a team fight broke out in the same place, though it only went one-for-one. Then, at 20 minutes, TL seemed to find their footing with a close three-for-two team fight win. They promptly lost it, however, when TSM honed in on Jensen and killed him twice within a few minutes. During this time, TSM was pulling ahead with a dragon lead and had three to their name by 23 minutes.

Calm and collected gameplay pulls ahead

Unfortunately for them, TL started to outplay them in the macro game at around this point. With a nice pick at 28 minutes, TL secured a dragon and stalled TSM out. About five minutes later, the teams decided to throw down for real this time, and in a tense bottom lane 5v5, TL obliterated TSM four-for-zero overall. This led to TL's first Baron, which let them do some damage, but not end the game.

As a result, TSM had time to hold on. But unfortunately, mispositioning from some players resulted in more kills to TL. At 41 minutes, TL found another pick onto SwordArt and started up the second Baron. When TSM tried to contest it, they lost two more members and ultimately the Baron too. Against the second buff, TSM simply couldn't hold on, and TL easily pushed through for a Game One victory. 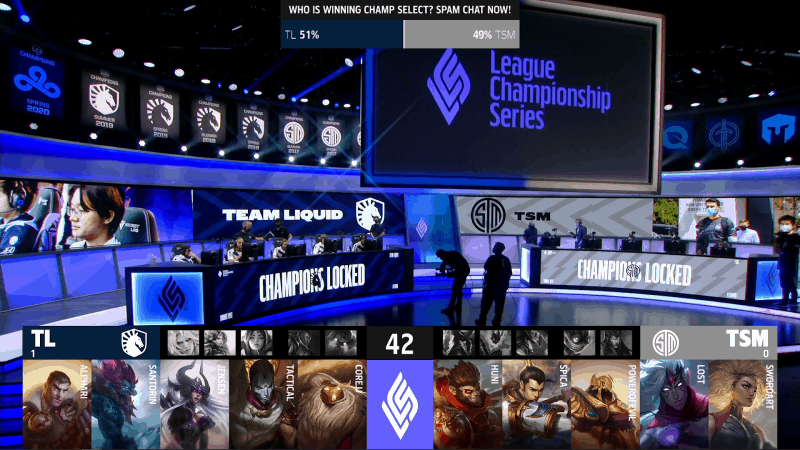 Rebounding, First Blood went over to TSM, making quick amends for the Game One defeat. However, TL was able to quickly punish Huni on the top side with a three-man gank. TSM got revenge for their top laner with a four-man dive onto Alphari top side, though TL turned up just in time to claim two kills for themselves in return. Post eleven minutes and the game was even across the board, as the tension of the situation saw both sides slow down.

It was TL who took the first big moment of the game. With a Rift Herald up, both sides moved to fight for it. Despite TSM starting the objective, TL cut them off, finding a big early kill before swiftly killing four members of TSM and taking a Herald. With TSM pushing the TL bot-lane, TL pushed into the TSM base and took down two Inhibitors for themselves. Even though TSM took down the bot lane, TL had two pushing lanes in top and mid. It’s a perplexing moment when you find yourself locked in your own base at 22-minutes, but that’s exactly the situation TSM found themselves in, with a Baron still on the map for TL to take.

TSM did their best, but TL just had too much for them to handle. With Mountain Soul and Baron on the map, TL Acing TSM seemed like all TL needed to claim a second game. With both buffs, TL chased TSM into their own base, and TSM simply couldn’t do anything to stop them. TSM members drop left and right, and their Nexus was next. TL moved to match point, giving TSM a lot to do if they want to stayed in this series. 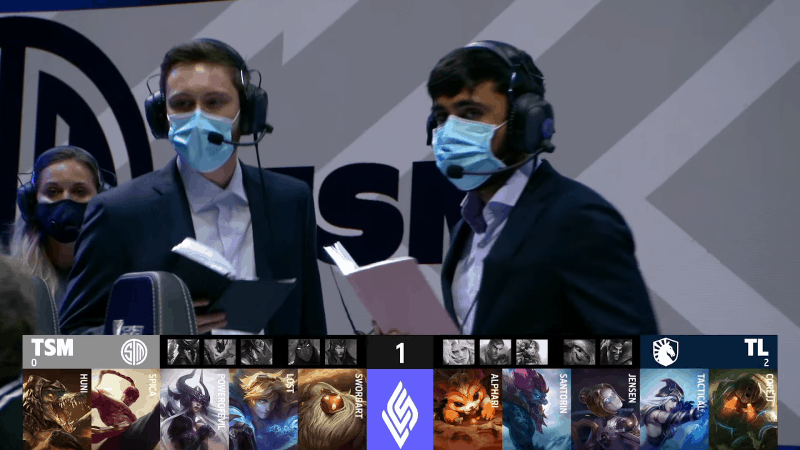 In the do-or-die match for TSM, it was another first blood for TL, though a misplay saw them drop a kill back. SwordArt, however, decided to help TL by gifting them another kill. Spica was able to claim another kill for his side to level the gold, though, with TSM’s top side outer town down at 12-minutes, the map was not in TSM's favor. TL gave up the second Drake to TSM, though sneaking away a mid-lane outer in return meant it was probably favorable for TL.

Then, just like that, TSM came out to play. The bottom side of the map came alive in a Huni vs Alphari 1v1, with TL reinforcing they failed to finish him off, which saw them lose three for just one in return. With Baron up, that was the next fight point of the match. TSM kept TL in the dark and forced TL to make an attempt to contest, but TL failed. TSM took down three and secured the Baron as they moved to 5k ahead. TL did get a chance to fight again, though TSM picked up an Ocean Soul, putting them in the strongest possible position.

The Baron buff came and went, and not much happened during it. But, with a second one spawning, it was all or nothing for TL. TL managed to win the initial fight, however, with minions on their Nexus towers, time wasn’t on their side. An amazing flank from PowerofEvil caught out the low HP members of TL and that’s all she wrote. TSM cleaned up the remaining members of TL and took the game. With that win, the series roars back into life, as we head into Game Four with TL still on series point. 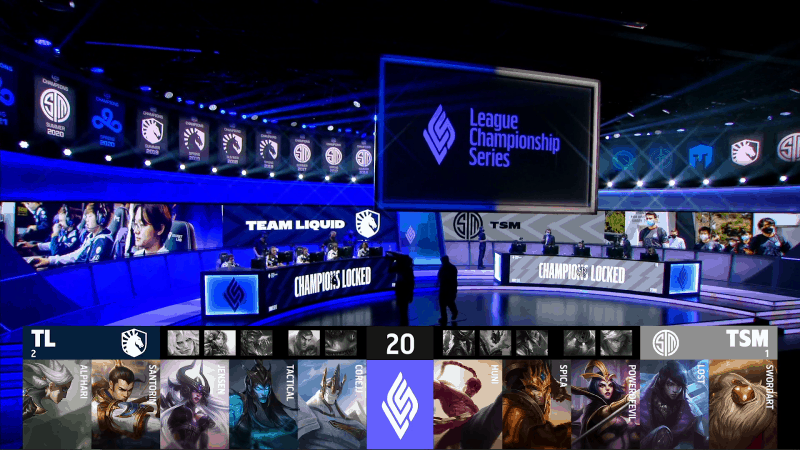 First Blood to TL in what could be the deciding game. A four-man collapse on the bottom side of the map caught TSM off guard as TL take an early lead. Then there was more fighting in the mid-lane, with a 3v3 fight seeing both sides claiming two kills each, with TL likely to be the happier of the two sides. TL picked up the Rift Herald, however, TSM was able to stop it before it hit the top-lane tier 1 tower, denying around 1k gold to TL in the process.

With both sides sending people to Drake, TL was able to snipe PowerOfEvil and claimed the first Drake of the game at 14-minutes. It’s another top lane play for TL, picking up another kill, extending their lead to 2k. TSM is caught out by three members of TSM in the bot-lane, however, with assistance from Jensen TL are not only able to escape but pick up another kill. It just kept getting worse for TSM, TL picked up two more kills on the top side, and a Drake, and things kept snowballing for TL. With the match now entering the post-Baron spawn period, TL moved to the area as they tried to bait TSM into making a mistake.

A slight misplay from Alphari gifted a kill to TSM, thankfully for him, his team picked up a kill in the mid-lane for him. With one man down, TSM made a limp attempt to stop the TL Baron take. With TSM desperately trying to hold onto their base, they defend it aggressively as TL moved towards Soul Drake. Huni TP’d in to halt TL, but his team cannot get to him fast enough as he falls, as does the rest of his side alongside him. With just PowerOfEvil left alive, TL knocked down the TSM base and secured their spot at Worlds 2021.