It was the final day of Round One of the LCS Summer Championship, and it was set up to be a classic.

The second of the two Lower Bracket elimination rounds got underway between Golden Guardians (“GG”) and Cloud9 (“C9”). With the loser heading out of the LCS Championship, and with it out of Worlds contention, all the pressure was on C9. With their history in the league, it hasn’t been a 2021 to remember for C9. After the big-money move for Perkz in the off-season, things just haven’t clicked. With the prospect of a Round One exit on the cards, how would they cope? It took a while to come, but First Blood was eventually picked up by C9 in the mid lane. Sadly, the kill went over to Vulcan on the Thresh, however, the assist gold was no doubt helpful. GG was able to get a kill back in the mid lane, with Perkz on the receiving end of that death. With one drake each, and the gold all but even, the game was delicately poised at the 13-minute point. Here, Perkz was quickly able to make up for his mistake, picking up a kill for himself in the GG jungle.

The first mid lane team fight started off scrappy, but it was C9 who were able to make the big plays, picking up a 21-minute Ace. With Baron spawning, it was a free pickup for C9 as GG faced a massive uphill fight to stay in the game. With the siege underway on the GG base, C9 committed to the bottom side Inhibitor, and it was clear the gold gap was too large. GG managed to stop C9 from winning the game, but it felt even more like a matter of when, and not if.

Despite GG’s attempts to flank the C9 members in a desperate defense, it was done so in vain. C9 was able to simply power through the GG mid lane Inhibitor and take down their Nexus. With that, C9 moved to 1-0, with GG needing to make a lot of changes for Game Two. 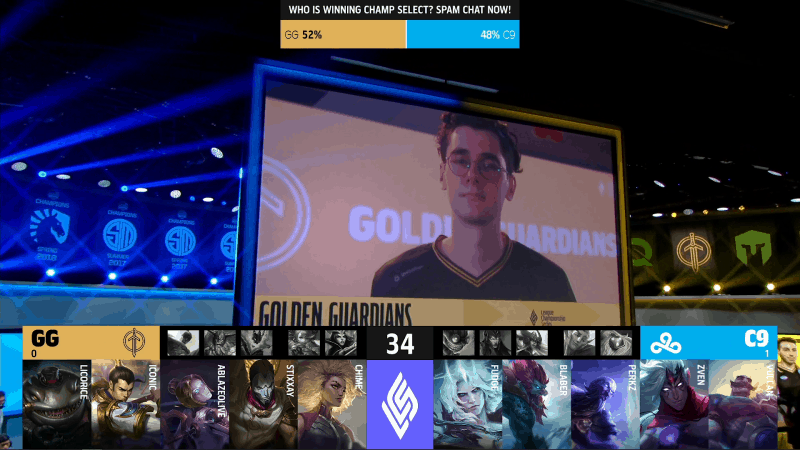 C9 managed to do it again, picking up First Blood for themselves in the mid lane, with a 3v1. However, GG was able to get one back, with C9 seemingly falling asleep on the Rift. More back-and-forth saw kills traded after C9 picked up the first kill. C9 was the side to take a definitive lead after securing two big kills on the bot side. Blaber started it off with a 1v1 solo kill in the jungle before his side collapsed on the bot side of the map to claim another.

Not to be outdone, GG came right back into the game with two kills of their own in the mid lane, before turning it into a Rift Herald. With Iconic looking to take an easy Drake for his team, C9 collapsed onto him. They stole the objective and this moved them to the Soul point, and gave them a 2k gold lead as Baron spawned to boot. A follow-up fight happened on the bot side, but it was GG that time who took it 2-0 as Game Two started to get tight.

The Baron fight was next on the docket, and it was C9 who took it with relative ease. The buff also came with two free GG members’ deaths for good measure as C9 looked to close out Game Two. C9 used the Baron to keep up control on the map, extending their lead to 3.2k while threatening the GG base on two fronts. With the second Baron spawning, GG tried to make a play, but with Perkz flanking, C9’s patience paid off and they were able to pick up an Ace. Leaving Baron alone, they pushed straight into the GG base, taking the series to 2-0. With that result, GG would need a miracle to win the series from this point. It was three-for-three for C9, as they picked up yet another First Blood in this series, this time in the bot lane, giving Zven a dangerous potential snowball. And like clockwork, GG hit back shortly after with a kill of their own in the mid lane. Afterward, there was more back-and-forth with a set of kills traded. C9 maintained a lead, though it was a slight one.

With four minutes until Baron spawned on the map, the game was tense and kill trading continued. The top side saw the action this time as C9 took down the top lane outer tower along with Licorice in the process.  They did lose Perkz in return but C9 didn't mind. Eventually, they finally looked like they were done waiting around and started to make bigger plays around the map. With Baron up, C9 forced a fight and pulled ahead with four more kills across a few skirmishes, with just returning to GG. With a 3k lead at the 22-minute mark, C9 moved into solid control.

C9 continued to go through the motions of the game, but it was GG who forced the play by trying to rush a Baron in the dark. With Teleports used by both teams to get into the pit, Licorice was chased down by C9, and it was advantage C9 once again. With Licorice dead, C9 claimed a free Baron. GG just couldn't keep their base standing, as C9 slowly crept up the lanes and took down everything in sight. GG made a last attempt to save the game, but it wasn't not to be. After a clean 3-0 sweep, C9 moves onto the next stage of the Lower Bracket with confidence.