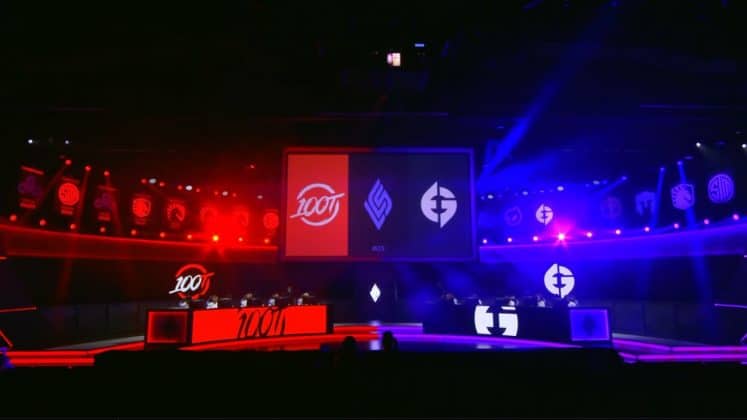 Day Three of the second week of action saw the first series of Round Two get underway.

It was the turn of 100 Thieves (“100T”) and Evil Geniuses (“EG”) to enter Summoner's Rift as they looked to progress in the Upper Bracket. The winner will move to face either TSM or Team Liquid, with the loser being given a second chance in the Lower Bracket. It was too close to call in the pre-game, with the analyst desk and fans split on who’d win. 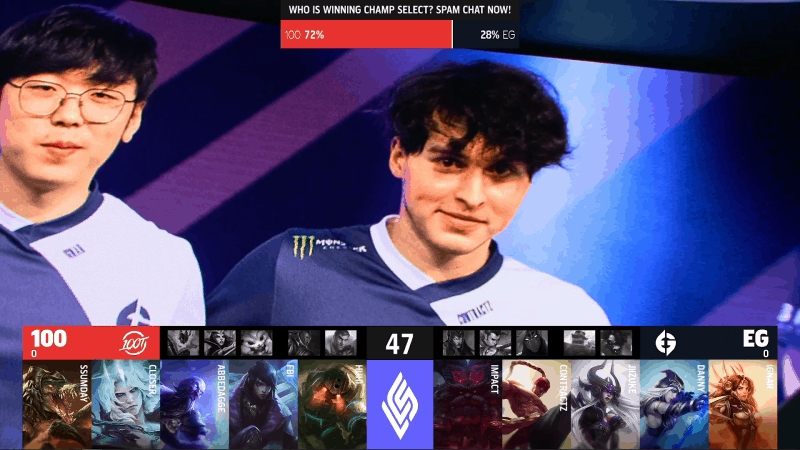 100T was the side to pick up the crucial First Blood of the series, with a kill picked up onto FBI after a 2v2 turned into a 3v3 with TPs. It’s three in a row for 100T, as they picked up a kill in the mid-lane after a 3v2 went their way, while another kill went to FBI on the bot side. With EG trying to fight back, they gave up another kill in the 100T jungle. Before the 10-minute mark, 100T had built up a 1.5k lead.

The fighting just wouldn’t stop, despite EG getting some kills onto the board, 100T were able to more than makeup for it. Chasing EG out of the river, they took down another four members, moving their gold lead to 3.5k. Not to be outdone, EG slowly started to find its way into the match. Picking up a few kills as 100T failed to utilize their win condition. The comeback was well and truly on as EG pulled the trigger on yet another fight in the mid-lane, picking up a kill onto Abbedagge. But then just like that, 100T pulled it together, taking down two members of EG for free as they postured towards the Baron.

The big team fight came at the 29th minute, and it was 100T that won it yet again. Despite EG almost taking down Closer, it was 100T who came out on top, picking up a Baron. While the game wasn’t closed out with Baron, it did extend the 100T lead to 9k ahead, as they moved back to their 1-3-1 formation. With the next Baron up on the map, EG did their best to steal it but 100T focused Contractz down as they looked to close out the game. While EG made a desperate play to keep themselves in the game, picking off FBI, they left their base open, losing both the top and mid-lane Inhibitors as they fought to stay in the match.

It was game over for EG on the next attack, taking down two members outside the EG base, 100T walked in and took down the Nexus. While the result went 100T’s way, it took them a lot longer than they probably needed to in order to finish it. 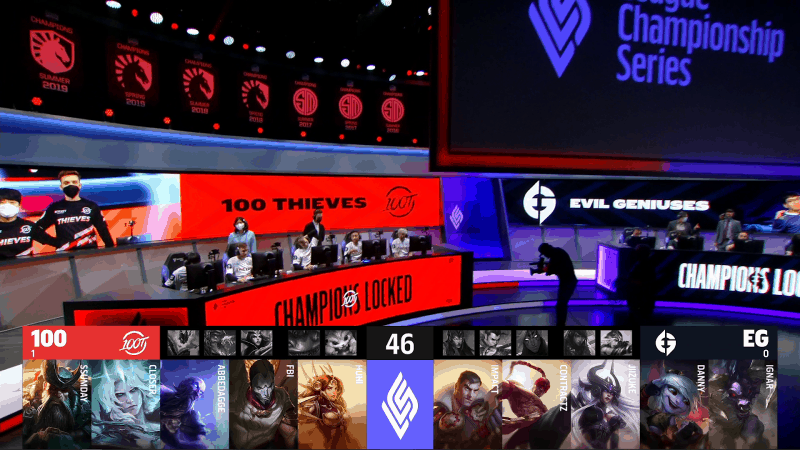 It looked like EG came into Game Two ready to play. However, after securing two kills, they were chased down and ended up losing three members of their own, and ultimately giving the lead to 100T. 100T tried to capitalize on the early lead by going for a 2v1 in the top side, but they couldn’t get the kill confirmed as Contractz was able to save the day, and claim a shutdown. A moment later, Jizuke picked up a solo kill in the mid-lane, putting EG into the lead.

While the game was quiet for a moment, the top lane was the next action center. Ssumday was able to delay a 1v2 gank on himself for long enough that he turned it around as his teammates assisted him. Picking up four kills as a team, 100T put themselves firmly back into the lead. The next big fight was on the top side, but this time it was EG that took the 3-0, though barely. In the process, they flipped the gold lead and took control. EG continued to create a gold gap, taking down the drake, while trading one-for-one in kills.

Full speed ahead for EG

Next up is the Baron buff, and surprisingly, EG picked it up without 100T even being able to react. With it, EG forced control of the map. With Soul Drake spawning, EG decided to head to that after taking down the 100T mid-lane inhibitor while looking to tie up the series. 100T collapsed on the next fight but they weren't strong enough. EG walked right on through the 100T line of defense and the Nexus fell. EG never looked like letting go of the lead once they had it, which gave 100T a lot to think about before Game Three. 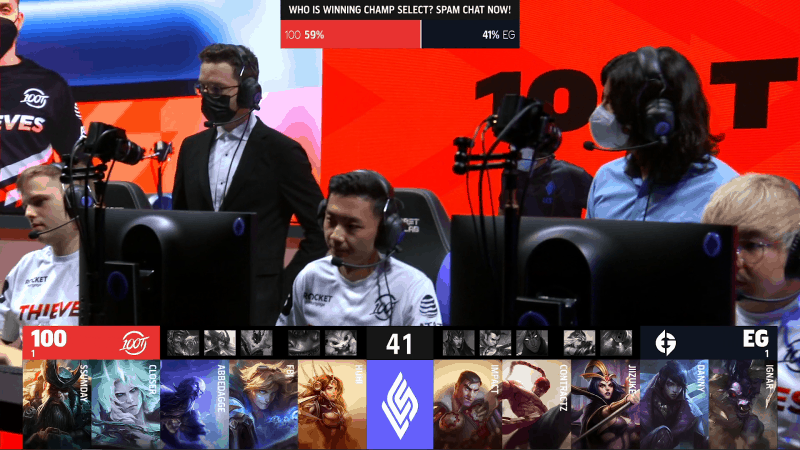 EG built off their Game Two start by getting Game Three off similarly. Crucially, this time they don’t lose a kill in return during their aggressive plays. While 100T got onto the map later on, EG clapped back with another kill in the mid-lane before dropping a Rift Herald moving 1.1k ahead. After a short bit, the first team fight kicked off on the bottom side of the map, and it was 100T this time taking the fight, dropping two members of EG and taking a free Drake for their trouble.

It went bad to worse for EG, with 100T picking up kills, they snowballed across the map as EG started to fall apart by the 19-minute mark. 100T continued to build on the gold lead, expanding it to 5k by the 23-minute mark, as they looked to secure lane priority before moving to the Baron. It’s a free Baron pickup next for 100T. Equipped with the biff, they managed to slow the game down and choke out EG inside their own base. With Baron now secured, 100T looked to push in their lanes and close out the third game.

With the base open, 100T took down two of the EG Inhibitors but weren’t able to secure the entire EG base. As 100T ran away, Jizuke was able to snipe a kill for his side to help them hang on. Despite their best efforts, EG just couldn't handle the pure damage of a pushing 100T, despite Jizuke’s best efforts. With minions overwhelming the base, 100T secured Game Three and moved to 2-1 in the series. 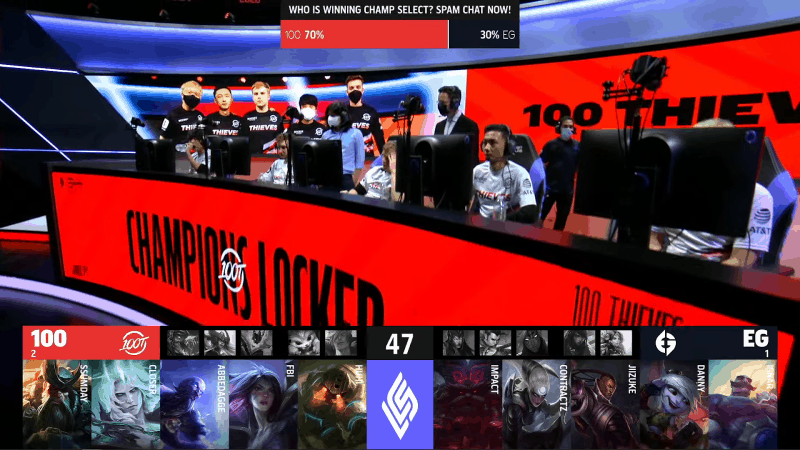 100T got the fourth, and potentially final match off to the perfect start. Huhi traveled to the mid lane, and despite a ward spotting him out, he was able to Flash onto Jiizuke and claim First Blood. EG traded back two in the following scrap in the bottom river. Closer tried to make a hero play in a 1v3 but a great Exhaust from IgNar spoils Closer’s fun, and he dies too.

Then there was a quiet build-up to the first Baron, and it eventually went to 100T despite losing an early kill in the team fight. The gold lead started at just 1.1k at the start of Baron, as EG continued to look for picks to nullify the Buff. It was a similar story in the fight around the Drake. EG started it off perfectly with a kill, but they just couldn't maintain the pressure as 100T took the fight and knocked down the mid-lane. With victory in their grasp, 100T decided to reset and spend their gold, with EG given one last chance to stay in the game.

The next fight was deja vu for EG. They picked up the first kill before completely collapsing in the follow-up fight. 100T turned it around, dropping three members of EG and claiming yet another Baron in its midst. In a desperate attempt to turn the game, EG unloaded everything onto Ssumday, but he was able to escape and EG were left red-faced. EG just refused to die, once again getting an early kill, but crucially, able to stand toe-to-toe in the fight this time and took down three members of 100T. While they lost members in return, they picked up crucial gold and stayed alive in the series.

Of course, we got another fight, this time in the mid-lane, but this time it’s 100T that got the first two kills. EG’s Danny turned around the fight, picking up three kills for himself as 100T couldn't shut him down as he Aces 100T. Carrying his team on his back, Danny picked up a delayed Penta to keep EG alive in the series. And just like that, EG did the unthinkable and took down 100T. After Danny’s miracle team fight performance, EG took down 100T and the series went to a fifth and final game. 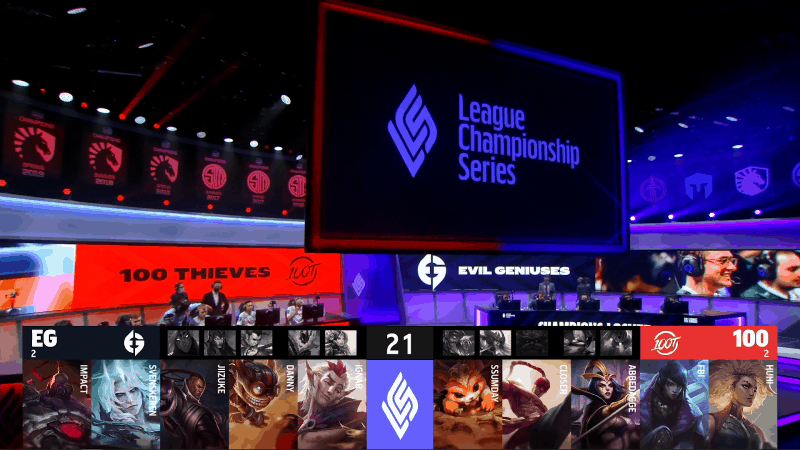 It’s a back and forth pre 13-minutes, but it’s 100T that made the big play when it mattered most, picking up four members of EG as 100T moved to 5k ahead. The Baron spawn lull is in full effect, as 100T again tried to starve EG of resources across the map, with most of the action coming in the form of jungle camp stealing. 100T baited the fight at the Baron, and EG just didn’t have the damage to stop them. 100T took down two members of EG and claimed the Baron, though EG takes a mid-lane tower in return.

Things became even worse for EG. 100T secured Baron and the Dragon Soul and were simply too strong, so EG lost four members in a decisive fight. 100T pushed into the mid-lane, taking down the EG Nexus Towers before focusing down the Nexus. With the win, 100T locks in at least the third spot for NA and finally will head to Worlds.