Wrapping up Day Three is 100 Thieves against T1, who both can make their bid easier for getting out of groups with a win here. 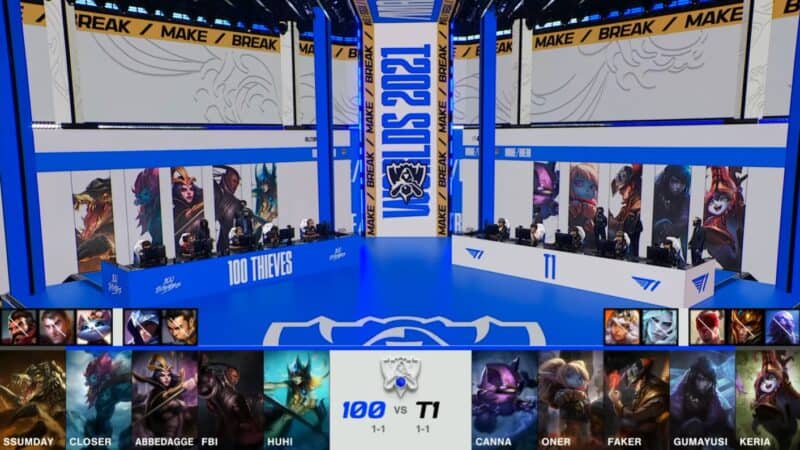 As EDG was undefeated, and DFM was winless, this match was a big indicator for who would probably take second place in the group. With an interesting Poppy jungle pick, Oner made his presence known early by ganking bot lane to kill FBI for First Blood. A few minutes after this, T1 secured a Rift Herald and took it to the bottom lane, where they busted some plates. However, they walked too far up and 100T was able to collapse and pick up a kill. Not too long after this, T1 capitalized on the earlier investment and claimed the First Tower bonus bot. When they did, another team fight broke out, where T1 snagged three kills and a Cloud Dragon without losing a single member.

At this point, the game already looked pretty bad for 100T. And it only got worse, as T1 rotated around the map to knock down towers left and right. Though they managed to find a pick onto Faker at 18 minutes, 100T just couldn't find a real way to strike back at T1. Because of this, things got worse and worse. It even got so bad that Canna dove Ssumday and solo killed him under his Inhibitor Tower.

Having the pressure, T1 went to Baron and started it. Knowing it, 100T moved to contest and somehow Closer walked right into the pit and stole it away! It was a miracle moment but 100T still faced a tall hill to climb. After the slip-up, T1 refocused and went to work methodically picking apart 100T. It all came to a head at 27 minutes as 100T tried to find a good fight in the top side of the map. At first, it didn't look too bad, but a devastating Canna Kennen ultimate ripped 100T apart. This let them take one Inhibitor, and all T1 needed was one more easy team fight to sweep 100T aside and finish off their Nexus.