While the Danish organization only swapped two members out after the 2022 Season, we might see a different year from them.

Wednesday the LEC hosted its first ever Kickoff Event, and with the victory of Team Dynasty, the 2023 Season of the League of Legends EMEA Championship has officially begun! After a brief hiatus, teams will return to the Berlin Studio to play in the Winter Split and determine who will be the first LEC Champion this year – and among them will be one of the weakest links of last Season, Astralis, who didn’t change as much as they could have.

There were some rumors at the beginning of the offseason that Excel Esports would build a new roster around Patrik “Patrik” Jirú and Finn – but only half of that came true. After a canceled verbal agreement, Finn didn’t go to a bootcamp to Korea; however, he did find a new team in Astralis. The 23-year-old previously played for teams such as Ninjas in Pyjamas, Movistar Riders and Rogue, before Andrei “Odoamne” Pascu took his place – like with Excel Esports. That didn’t stop Finn however, who left Europe to play for CLG in the LCS. That stint didn’t work out, though, as Finn finished in 9th and 10th place back in 2021, then returned to the LEC to help break the Excel Playoff curse. Now he has a new curse to break, which has again to do with Playoffs. His predecessor, Kiss “Vizicsacsi” Tamás and the previous iteration of Astralis almost got into the top 6 last Summer, but after a catastrophic last week in the regular split, they got 8th place. But Finn is much more of a carry toplaner than Csacsi was, with picks such as Kled and Irelia – the former we could witness in the Kickoff Event (although as a jungler). Proficient on Gwen and Gangplank as well, Finn could warp his team towards the toplane more than Astralis has seen before, which could mean different outcomes for their matches as well.

Astralis signed a seasoned veteran in Finn, but they got an up-and-coming star in the jungle by getting 113 from Karmine Corp. The 18-year-old Turkish player has competed in Papara SuperMassive’s Academy team, then played for Vodafone Giants in the LVP SuperLiga, before joining Karmine Corp at the end of November 2021. He won the 2021 Summer Playoffs of the Spanish ERL, then went on to get gold medal in the Iberian Cup 2 years ago. After joining Karmine Corp, he didn’t manage to win the LFL, but got first place in the Spring EU Masters. Sadly, 113 and KC missed the Summer EUM, but he got his chance in the LEC. While being extremely young, 113 has shown proficiency with picks such as Xin Zhao, Volibear and Jarvan IV, and he can play Lee Sin to perfection. As long as he’s not picking Viego, he’s hard to catch and hard to track, and should have a more proactive approach to the jungle than Andrei “Xerxe” Dragomir, and could prove to be a deadly duo with Finn.

The Danish org decided to keep their midlaner, Dajor, who joined the team before the 2022 Spring Split. The young German has been dubbed a speedrunner of the LEC, as he joined the highest level of European League of Legends only after a summer season with Fnatic Rising. He joined the Fnatic Academy team before the 2021 NCL Split, which they managed to win, but only got 2nd place in the playoffs. They went on to qualify for the main event of the 2021 Summer EU Masters, and made it to the finals, where they almost managed to beat Karmine Corp. After a stellar performance in the ERL’s, many of the second-division players got signed by LEC orgs, and Dajor managed to stick after a year.

A year, where Astralis didn’t do very well. After the 10th place in the Spring Split, they almost go into the Playoffs after Summer, but an 0-3 made quick work of the team's dreams. Dajor was a bit quiet in Spring, but at Summer, he started to play a lot more Vex, which suited his playstyle much more than his other picks. Dajor still has a lot of growing to do, but Astralis seems to be the team where he can push his limits.

Astralis decided to keep their star player as well, Kobbe will bring the experience alongside Finn in 2023. The Danish player has played for scene giants such as Gamers2 (before they rebranded into the G2 we know and love today), Dignitas, Splyce, TSM and Misfits Gaming, before joining the organization at the end of 2021. While he never managed to win a European title, the Marksman got very close on two occasions: the 2016 EU LCS Summer Playoffs, where they got into the finals, but lost against G2 Esports 1-3; and the 2018 EU LCS Spring Playoffs, where Splyce almost managed to beat Team Vitality – but after losing 2-3, they finished 3rd. While he didn’t win any titles, he played in multiple World Championships: he got into the top 16 in 2016, where Splyce couldn’t make it out of groups, then returned in 2019 alongside Vizicsacsi, and got into the quarterfinals, where Splyce took a match from the legendary SKT T1 and Lee “Faker” Sang-hyeok.

Kobbe is the best on more supportive picks, such as Ashe, Sivir and things like Veigar, which we didn’t see much of last year. At the end of the Season, he got pretty good at Zeri, but in order for the team to succeed, maybe he should pick those supportive ADC’s, and give more resources to Finn.

The highlight of Astralis’ last season, JeongHoon will return for next year as well! The young Korean import played for BRO Challengers in the LCK CL before joining the European scene, and he was a joy to watch in most of his matches. His best performance was back in the 2020 CK Spring Playoffs with Element Mystic, where he and his teammates finished in the top four. He also represented South Korea in the Esports Championship East Asia 2021, where Team Korea managed to beat Team China and win the ECEA. 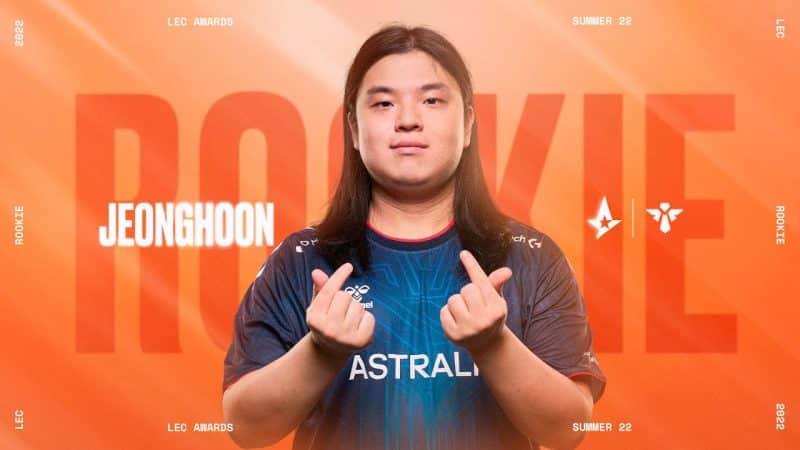 He got scouted by Astralis before the 2022 Summer Split, and he became a worthy successor of Hampus “promisq” Mikael Abrahamsson. His most-played champion was Rakan, but he played a fair bit of Tahm Kench in order to keep his teammates alive. But the character he got most known for was Pyke, in which he played like a madman, getting behind the enemy line constantly while making sure to get picks for his teammates as well. JeongHoon is one of those import players who the region should pray about staying because, in time, any team could be happy to have him.

While Astralis only changed two members, they could become an entirely different team from the last season. They have some opportunities to shift their playstyle around, focusing more in Finn and young-and-hungry 113 instead of the botlane. Along with the top-jungle duo, JeongHoon should be the one to keep an eye out for, while Kobbe and Dajor should be the enablers of 2023 Astralis.

Hopefully, Astralis can leave the bottom of the barrel this year, as they haven’t had much success since joining the LEC. Catch Finn and co. on the first day of the 2023 LEC Season, January 21st!