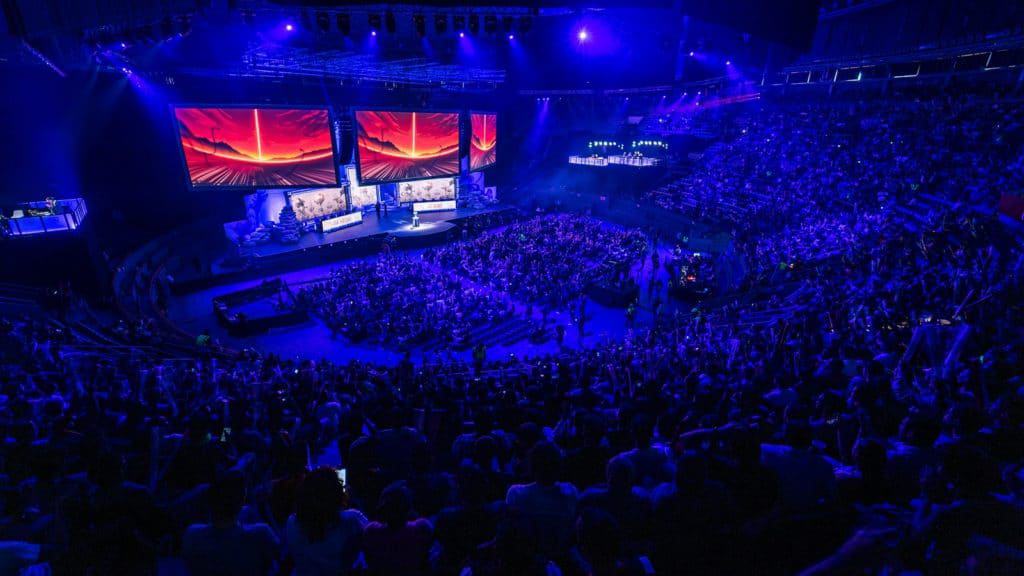 Invictus Gaming and FunPlus Phoenix took to the Rift today in hopes of claiming their spot in the 2019 LoL Worlds Finals.

The 2019 League of Legends World Championship is drawing nearer to its end. Only four teams remained coming into this weekend, and this first Semifinal series brought that number down by one. FunPlus Phoenix ("FPX") and Invictus Gaming ("IG") swept through their competition to meet each other and make this a battle between LPL giants. FPX dominated the LPL Summer Split and is a formidable foe, but as defending World Champions, IG is also no pushover themselves. It was a bloody series and one that no LoL fan will want to miss! 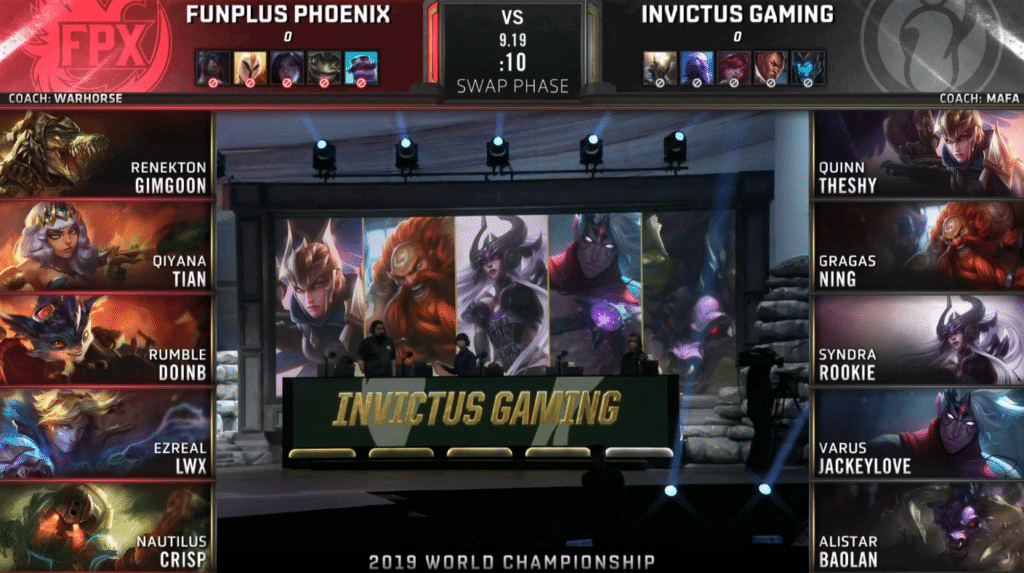 Game One kicked off the series on an exciting note, with FPX dominating IG with good roams and wombo-combo team fighting. The early game was close though, as JackeyLove picked up First Blood on Tian when he invaded his blue buff. IG also found a favorable two-for-one team skirmish top, but FPX soon turned up the pressure. Doinb's Predator Rumble constantly roamed top and killed TheShy twice. Essentially the map was split, as JackeyLove's Varus procured a few kills bottom while Doinb's Rumble was equally as fed.

But the game broke open in a moment. At 16 minutes, IG tried to pick off an FPX member, but FPX responded with a huge engage. Rumble's and Qiyana's ultimates went down and eviscerated the IG lineup, and FPX won the fight four-for-zero. FPX had full control over the game after this point and they leveraged their lead with more picks and skirmish wins. When the Baron spawned, the game stalled temporarily, but at 26 minutes FPX ended up easily sneaking it and killing Ning. Empowered with the Baron buff, FPX sieged the bottom lane and forced one last team fight. Again, FPX decimated IG, killing all five members with no casualties of their own. It was simple from here to stroll into IG's base and claim the first Nexus of the series. 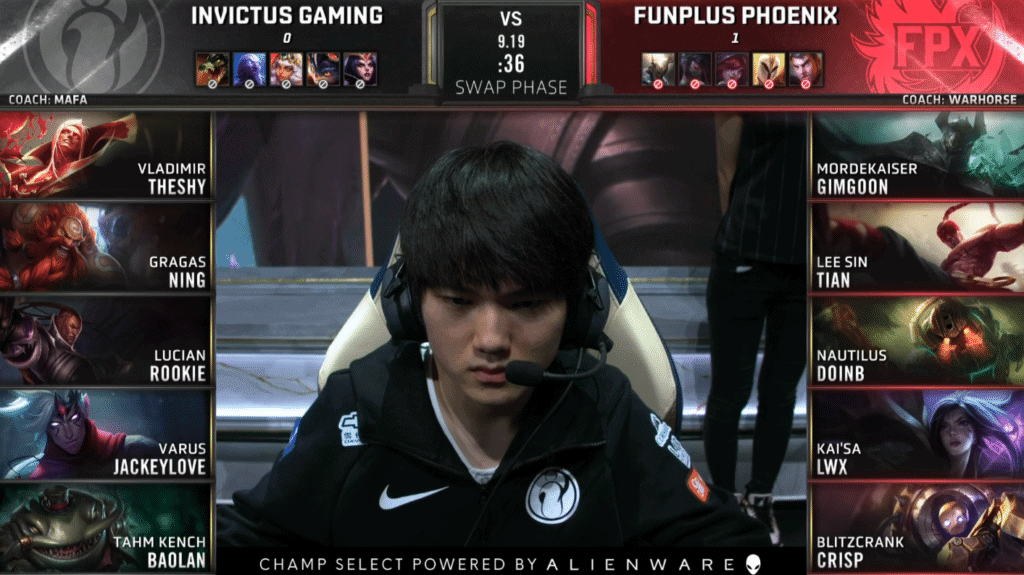 This series was expected to be an absolute blood bath, and Game Two showed why. Once again FPX carved out an early lead for themselves, but IG outplayed them in the late game to bring it to 1-1. FPX caught out Ning to kill him for First Blood, then won a team fight near the mid lane two-for-zero and killed the IG bottom lane shortly after. They used the Herald to take the First Tower bonus too, and with more kills going in their favor, FPX looked like they'd take an easy second win.

But the IG made a huge play. From behind, they rushed the Baron and forced FPX into a fight. TheShy destroyed LWX's Kai'Sa while IG slaughtered the rest of FPX, and at the end of it all, IG was ahead five-for-one in kills with the Baron buff secured. Soon after, they destroyed the middle Inhibitor, but the game descended into chaos. For nearly twenty minutes there was non-stop brawling over objectives and vision alike. Both teams found winning fights, and as such, the game constantly swung back and forth without going too far one way.

The final fight came at 41 minutes, as Doinb stepped too far forward and was caught out. IG used their Tahm Kench ultimate to cut off his escape and they killed the main engage for FPX before he could do his job. The fight looked doomed for FPX, so with FPX Super minions crashing into IG's base, LWX decided to Teleport in and try to end the game. TheShy followed suit and narrowly managed to get there in time, and as late-game Vladimir, he obliterated the Kai'Sa while IG swept in and destroyed FPX's Nexus. 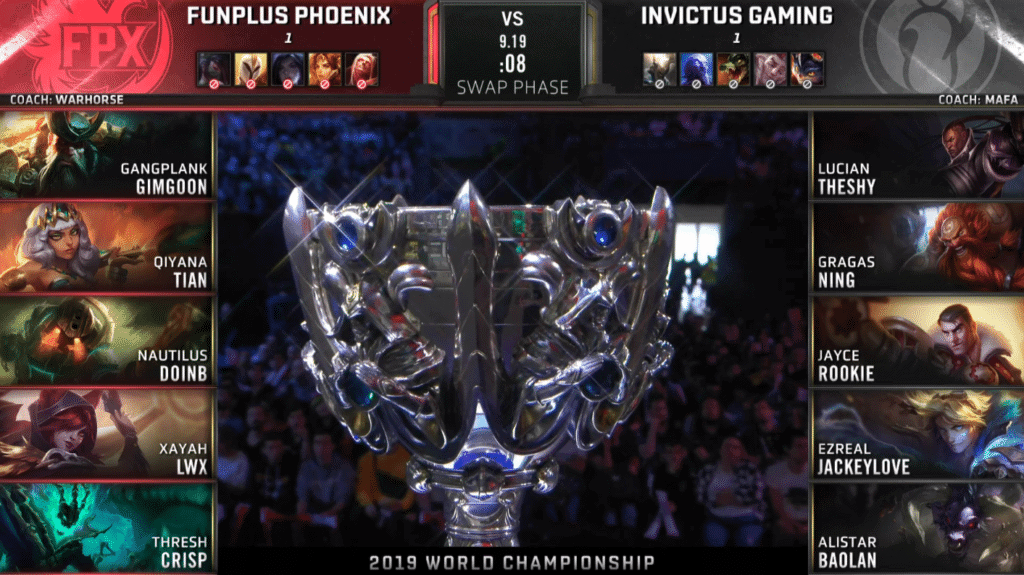 In Game Three, FPX won another extremely dominant win. IG opted to give Qiyana over to FPX and it cost them dearly. Though IG did come out to an early lead with a four-for-three team fight victory at the Rift Herald, FPX simply out rotated and out team fought them in the mid-game. GimGoon's Gangplank, who was abused early game by TheShy, was able to pick up two towers by himself, one of which netted him the First Tower bonus.

They pushed the tempo of the game quickly, trading up in towers and kills whenever IG went for a play. At 19 minutes, IG tried to contest FPX for an Ocean Dragon, but FPX gladly accepted the fight. Here, FPX killed three from IG and took the dragon. Two minutes later, IG tried again to contest FPX at the Baron. IG lost three more members and the Baron buff to FPX as a result of this decision. Emboldened, FPX fearlessly pushed mid, where the forced an engage on IG to grab four more kills and an Inhibitor. Facing a crippled IG squad, FPX swiftly blew through IG's base, blasted their Nexus and brought the former World Champions to match point. 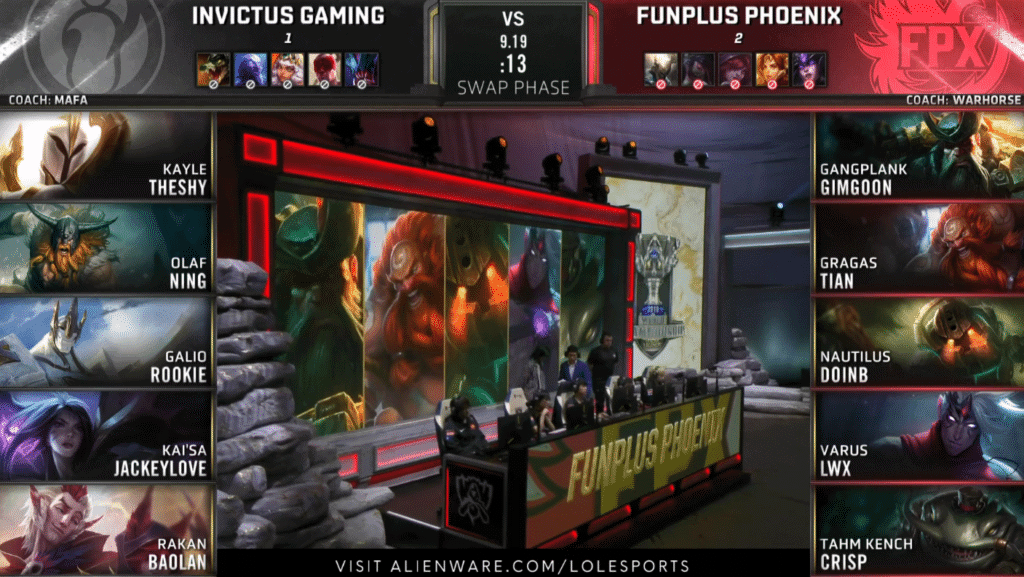 And with one last victory, FPX knocked the defending World Champions out of the tournament, proved themselves as the best Chinese team in the world and claimed their place in the Finals. This match was particularly close, but superior team fighting and horrible mistakes from IG gave FPX the win. Ning practically gifted FPX First Blood by invading their red buff at level one, which led to TheShy losing his Flash too. This allowed GimGoon to solo kill him in lane a couple of minutes later. The rest of the early game was FPX dominated too, as they won team two team fights to accumulate a wealth of kills.

It looked doomed for IG, but suddenly they found a winning fight in the mid lane where TheShy got a Quadra Kill and his team went up five-for-two in kills. With this, IG secured the first Baron. Unfortunately for them, FPX routed them with a two-for-zero mid lane team fight. They also picked off Baolan to stall the buff out until its end. Despite these set backs, it was still winnable for IG until 28 minutes. Here, TheShy and JackeyLove made the game-losing error, walking into a dark FPX jungle and giving over their lives for free. FPX took the Baron afterward too.

Now, FPX was huge as they pushed forward. IG tried to engage on them in the bottom lane, but FPX turned it around and won the fight four-for-two. The bottom Inhibitor fell, but FPX couldn't quite end yet. Fortunately for them, IG tried to push mid to retake FPX's middle Inhibitor. Though TheShy was carrying many of these fights, he made yet another positioning mistake and was caught out on Kayle without ulting. FPX swept through IG from here, then easily pushed mid and demolished IG's Nexus.