The 2019 League of Legends World Championship is three days in so far. Through these three days of competition, there have been expected wins and upsets alike. Every game matters in the biggest tournament of the year, and with everything on the line, all of the players are delivering their best. Day Three featured some phenomenal games, so here's how it all went down. 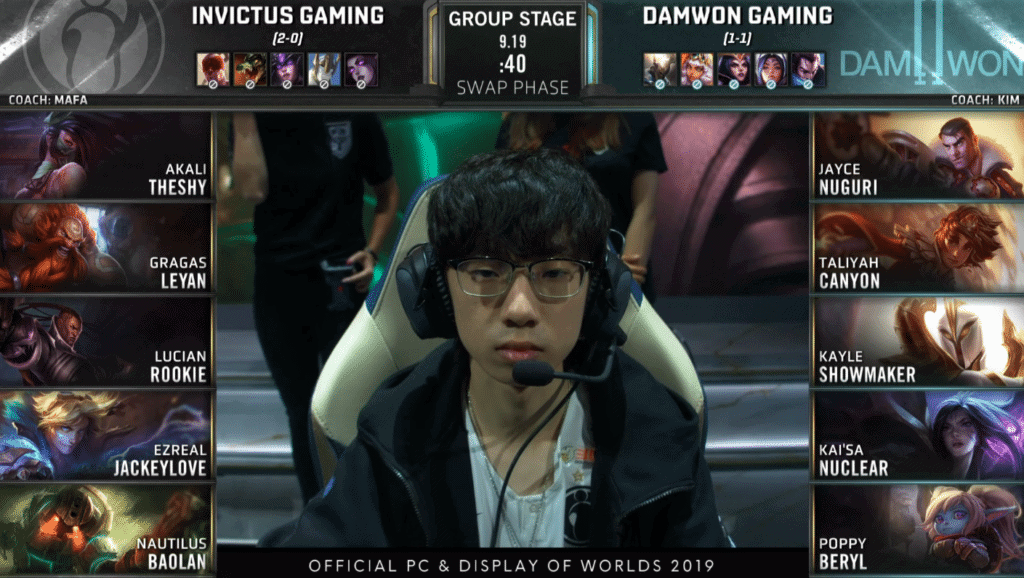 IG and DWG kicked off the day with a fantastic game for fans to watch. There was a lot of action around the bottom lane early on, as DWG got First Blood there at five minutes, then three additional ones in total with the help of Canyon. It heated up even more at 13 minutes, as Nuclear solo killed JackeyLove and Rookie solo killed Nuguri. DWG furthered their lead with a skirmish win three-for-zero at 15 minutes, but suddenly IG stepped up. They smashed DWG in a mid lane team fight and established decent control over the map.

But DWG didn't want to let IG claw their way back. With two Mountain Dragons and a ton of damage, they rushed the Baron at 27 minutes and secured it before IG could even get close. They couldn't do much damage to IG's base but did get some more kills and a few towers with this buff. When DWG went to siege top, Leyan caught out Nuclear with a Gragas ult and set his team up to win a team fight four-for-zero.

This part of the game was back and forth, as DWG got two picks and a second Baron. Afterward, DWG slew the Elder Dragon too. This combination of buffs allowed DWG to easily destroy IG's middle Inhibitor before going bottom. Here, a hectic team fight broke out, but DWG ended up getting a clean Ace over IG. At this point, all the IG members could do was watch as DWG blasted their Nexus. The second match of the day was another exciting one, with high-impact plays coming from both TL and AHQ. This one was also back of forth, but TL clutched it out at the very end. They did have a fairly decent lead in the early game too, as Xmithie ganked and killed Ziv, then TL killed Rainbow in the mid lane. To make it better for NA fans, TL smashed a team fight at 11 minutes four-for-one and took an Infernal Dragon. But things wouldn't keep going so well for TL.

Once the mid-game rolled around, the Qiyana and Rumble ultimates from AHQ were oppressive. TL struggled to disengage from the combos, and as a result, were forced into a number of bad fights. After winning one of these fights three-for-zero at 30 minutes, AHQ secured the first Baron. It wasn't the most destructive buff, but AHQ did manage to take the middle Inhibitor after yet another team fight win. Right after this, AHQ went to Baron. It was near death, but Xmithie jumped over the wall and stole it away from AHQ!

Now on the front foot, TL took the Elder too and sieged the middle and bottom lanes. The bot Inhibitor fell quickly, then a team fight broke out when Jensen was caught out. Impact turned up huge here, essentially going 1v3 on AHQ's backline. TL ended up killing all five from AHQ before claiming their Nexus. The action didn't stop in Game Three, as FPX pulled off a huge comeback victory over SPY. GimGoon did start his team off on the strong foot, as he solo killed Vizicsacsi for First Blood. Fortunately, Xerxe ganked him and killed him in response. FPX found a successful gank mid too, but these were all minor compared to SPY's next play. At as early as four minutes, SPY dove the bottom lane tower, juggled aggro beautifully and got three kills. From here, SPY seemed to have FPX's number.

They had complete control over the map now. Kobbe's Glacial Augment Veigar was helping set his team up to find multiple picks and create huge zones of control in team fights. After winning a team fight three-for-zero at the dragon, SPY looked like they would close it out. The game had a few inconsequential plays in the next few minutes until SPY picked off Crisp at 27 minutes. With this, SPY immediately ran to Baron and burned it down to 2,000 health. But then disaster struck. Tian got into the pit and stole the buff away, as his team collapsed and slaughtered all five SPY members. FPX flipped a switch after this play, as they picked off Humanoid and killed two more SPY members. SPY tried desperately to defend their base, but couldn't stop the reinvigorated FPX squad as they demolished their entire base, and finally, their Nexus. A hectic game was in store for Game Four, with GAM pulling out a crazy win in the end. The action was plenty and often, and started quite early. Hana ganked top to get Rest First Blood on Zeros, but Kiaya responded to JT's aggression by narrowly winning a fight against FoFo and solo killing him. Soon after, GAM went bottom and started a long tower dive fight that results in a three-for-one trade in favor of GAM. GAM kept up the pressure by forcing another fight, which gave them two kills and an Infernal.

But JT were able to stick in the game through picks. A few GAM members were caught out in the mid-game and this allowed JT some breathing room. But it didn't last too long. That's because when the Baron spawned, GAM constantly threw themselves at JT. Their hard engage composition tried again and again to find that big fight but failed to get a good numbers advantage from the fights. Finally, at 36 minutes, they found the fight they needed. Kled and Nocturne flew in and set their team up to cut down all five members from JT. They couldn't end the game here or take the Baron though. So they had to hard engage one last time, but fortunately, this one bore fruit instantly. Four JT champions fell, and GAM easily waltzed into their base and knocked down their Nexus. Rebounding back from yesterday's loss, GRF redeemed themselves with a fairly clean win over HKA. Most of the game was very calculated from them, except for the level one. Here, GRF engaged on Crash in his jungle, but HKA was hiding in a bush nearby. Sion charged up his Q and swung it down on four GRF members, enabling his team to get three free kills. HKA did capitalize decently on this start, taking the Herald, an Infernal and the First Tower bonus relatively early on.

Despite the horrible start though, GRF made moves to stay in it. They executed a 2v2 near the mid lane perfectly and got two kills at three minutes. Fast-forwarding to the mid-game, GRF was much more active than HKA was, moving around the map to get picks and poke out their opponents. Eventually, GRF won a team fight convincingly two-for-zero, and though they didn't take the Baron, got another kill after starting it up. But that was fine, as GRF easily won another team fight at 34 minutes which did net them the coveted buff. With it, GRF pushed mid hard and ended up catching out Crash. In the 4v5, GRF rampaged forward, Ace'd HKA and smashed their Nexus. Finally, we come to the battle between EU and NA in the final match of the day. C9 tried bringing out Blaber in the jungle, but it wasn't enough to stop G2 from destroying them. As expected of these two teams, it was a volatile, bloody early game. The G2 duo lane killed Sneaky for First Blood in lane but on the other side of the map Licorice solo killed Wunder. Licorice was a monster, winning a 1v2 to kill Jankos too, but G2's bottom and mid lane got ahead through skirmishes.

The fighting literally never stopped. C9 managed to win a couple of the fights near the bottom lane, but G2 soon pushed the pace far beyond what C9 could handle. They dove the top lane and slaughtered three from C9. Then, G2 took that tower and the middle one too. At 19 minutes, C9 picked off Wunder, but G2 collapsed to blast C9 and Ace them. Two minutes later, another full-blown team fight erupted around the Baron pit. For the second time, G2 Ace'd C9 and claimed the Baron buff. Empowered, G2 swiftly knocked down two Inhibitors, but they weren't done there. They pushed forward, unafraid, and fought C9 yet again. They Ace'd C9 for the third time and smashed C9's Nexus in a super quick 24 minutes.