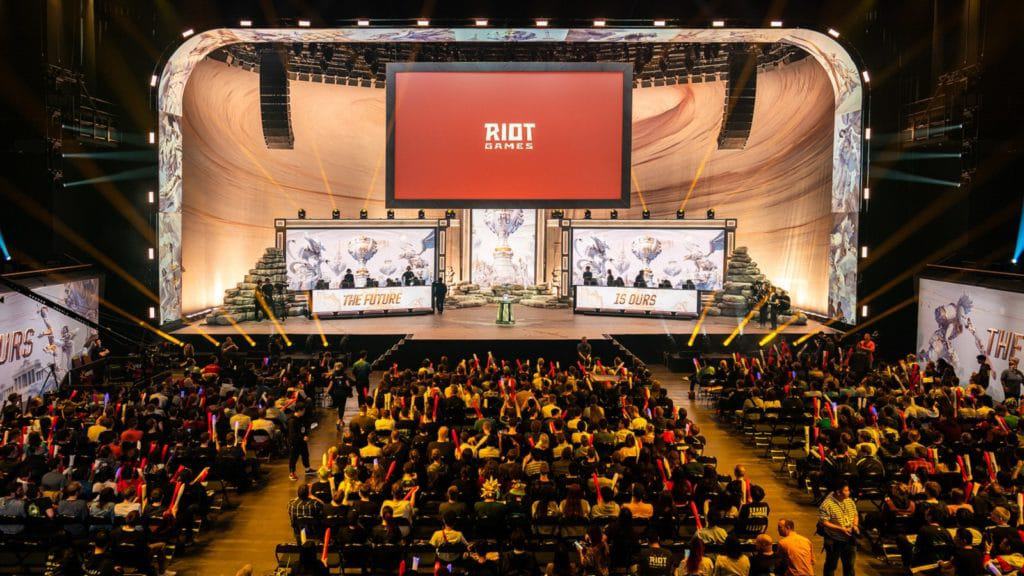 SK Telecom T1 vs Royal Never Give Up The first game set expectations high with SK Telecom T1 (“SKT”) narrowly winning. An explosive three for three started off the game in the bottom lane. Ming used his summoner spell advantage to force a kill on Effort. SKT used their Twisted Fate to pick up Royal Never Give Up’s (“RNG”) bottom lane for free. Xiaohu engaged on in the middle lane, but a massive outplay by Faker avoided a death and took him down for free. Uzi took the first tower in the bottom lane. Teams traded 1-1 again, but RNG’s double infernal kept them in the lead. RNG rushed the drake to secure triple infernal, but Clid stole it. RNG found an engage for a 4 for 2 fight. They pushed to force in the middle lane, but Clid found a cask that knocked Uzi into the tower, eliminating three. SKT rushed the Baron and picked Karsa to secure it. Ming continued welcoming Effort to the Worlds stage, taking him out again.

Faker got Ming in response, but RNG hard committed and took the remaining 4 players. SKT forced in the bottom lane, picking Langx and taking control over the Baron pit. While SKT forced on RNG, they handedly lost the fight. Unnaturally high gold in Uzi allowed him to carry the fight for a four-for-one and the Baron. Another pick on Langx stalled the game for SKT. SKT used Twisted Fate to take the bottom lane tower. As RNG moved to respond SKT took Baron. RNG took Elder Dragon and found a 1-1. At 41 minutes the game remained dead even. As Faker pushed top RNG went bot. Forcing five bottom lane for RNG resulted in SKT teleporting three top and forcing through. They ignored the enemy team and forced on the Nexus, losing Faker but winning the game. Fnatic (“FNC”) took a victory in the second game of the day. They found first blood in bottom lane, but Clutch Gaming (“CG”) found a response top lane. Picking Vulcan allowed FNC to take the Ocean Drake, but CG found two in response after the play. Clutch moved four top and found a free kill. They took four plates and a pick on Bwipo. Teleporting top lane gave FNC a kill, but CG found two in response. Tristana continued to be moved around the map, collecting the first tower in the bottom lane and then in the mid.

Vulcan’s ultimate found two picks for CG as well as another tower. Repeated picks allowed CG to take a decisive hold on the game. Mountain Drake was next for CG and they forced for a 1-1. Top lane brought a kill for FNC, but CG found a tower bot. FNC won a four-for-one fight by taking advantage of Yuumi’s heals. Another attempt for a pick from CG allowed FNC to finally take a kill and the mid lane tower. FNC found a 5-0 at the elder dragon and the elder dragon. They then moved to the Baron and turned off for four kills and the game. Invictus Gaming (“IG”) used their solo lanes to force out a win. attempted a dive bot lane, but Team Liquid (“TL”) turned the play around for first blood. Bottom lane was the target for TL. They found two kills with a gank and lost one in return. Returning to bottom lane brought IG a kill, but TL immediately answered back with a top lane kill. A counter gank in mid lane gave a kill to the red side. TL found an engage to get two more kills.

TL took the Rift Herald, but IG took the first tower bottom lane seconds before TL took mid. TL took total control of the map with all lanes pushing and IG’s first tier towers destroyed. Both sides found solo kills at crucial moments. Continued action filled the game as a 3-3 team fight broke out in the middle lane. IG broke the game open with a Baron and four free kills. They pushed through for the mid inhibitor and all the non-nexus towers. A final 4-1 fight let IG close the game out. Damwon Gaming (“DWG”) kept themselves in contention with their first win. At 12 minutes action finally broke out. AHQ Esports Club (“AHQ”) engaged a fight but lost it 4-2. DWG pushed to get the Mountain Drake. They picked it up as well as a 1-1 trade. AHQ took the first tower bottom lane. Two towers fell to DWG in response, but AHQ found a kill in the mid lane. Cloud Drake fell to DWG and AHQ took a kill.

Nuguri pushed bottom lane for a tower while the rest of his team took Baron. Top tier two fell next to ShowMaker. DWG abused their solo lane advantages to pressure the side lane to leverage Baron into a 7k gold lead. Nuclear jumped in alone mid lane. AHQ hard committed on him, but the rest of DWG showed up quickly, took the fight 4-1 and closed the game. G2 Esports (“G2”) put on a dominant show of their strength. They kicked off Group A with a first blood in the top lane. They returned to dive the Renekton again and found another free kill. Moving their focus to the bot lane, G2 took a bottom lane kill. Finally finding a response, Griffin (“GRF”) shut down Wunder in the top lane. As GRF was pushed around, Chovy flipped the script. A massive 1v2 solo kill on Caps in the middle lane opened the map for another kill in the top lane while G2 took the first tower in the bottom lane.

Solar flare allowed G2 to catch out Lehends and take the first middle tower. Perkz was caught out while farming the enemy jungle, opening GRF to take the Mountain Dragon. Kills for the side of G2 came out as GRF forced a fight. They converged as Wunder and Jankos stalled for time and brought in a 4-2 trade. G2 then moved to the Baron and rushed it while GRF couldn’t face check. Team fight set up brought G2 a 4-1 win the bottom inhibitor tower. They pushed the mid lane for the inhibitor and a free kill. The final inhibitor dropped and so did three of the blue team as G2 pushed for the win. A shaky victory by Cloud9 (“C9”) closed the day. Nisqy found the first blood in a 1-1 trade as he solo dove M1ssion under his tower. C9 found another kill when Crash went to face check Nisqy and Svenskeren. Mountain Dragon fell to C9 next. Licorice pushed forward in the top lane, but had the play turned on him by 3z. He fell without picking up the kill but Svenskeren found 3z in response. First tower blood came in the top lane as C9 returned with the Rift Herald. Bottom lane tower and Infernal Dragon fell to C9 next while Hong Kong Attitude (“HKA”) took their first tower in the top lane. A 1-1 trade came in the bot lane. Push advantage from C9 led to another tower falling in the bot lane.

As C9 tried to force another fight HKA picked up a free kill. After several failed attempts they found a kill on Kaiwing and the Infernal Dragon. HKA ran at Svenskeren as soon as they saw him and continued the play to a 3-1 team fight. A flank by 3z allowed an HKA two to one team fight win. C9 rushed down the Baron, took it, won a 3 for 2 team fight and took the middle lane inhibitor. After an overstay by C9 HKA found four free kills and stalled out the game. All hope looked lost, but C9 found an advantageous fight and took the Baron. They pushed the mid lane inhibitor and went back for Elder Dragon. Finally, an accidental stopwatch by Crash gave C9 the opening to find a 2-0 team fight and the game.