At last, the 2019 League of Legends World Championship Group Stage has begun! Fans around the world watched four teams battle through the Play-In Stage, but now the real competition begins. Sixteen teams have made it to this point and are hoping to push forward for glory. It's a long journey though, and every journey must start with a step. For many teams, this was exactly that, so let's take a look at how Day One went! The first game of the group stage was an interesting one straight from the draft, but SKT took this first match over FNC. The action started early on, with SKT invading FNC's red buff at level one. A scrappy fight ensued, but Faker managed to Flash forward and kill Rekkles' Garen for First Blood. From here, SKT had huge pressure from the mid lane that extended over the map, which was proved vital. That's because, at 11 minutes, SKT was able to send five members bot to pick up three kills for themselves. In addition to these leads, SKT used the Rift Herald to destroy FNC's middle tower for the First Tower bonus.

FNC constantly tried to trade back objectives, but SKT always came out ahead. Then the mid-game rolled around and SKT began to dominate team fights, though to their credit FNC did fight tooth and nail to try to claw their way back. But with Faker's Tristana getting kill after kill and Teddy's Kayle scaling up, FNC's doom was inevitable. After winning a 29-minute team fight, SKT quickly secured the Baron buff then pushed. FNC did pick off Khan in the side lane, but when it turned into a mid lane team fight, SKT cleaned house. They slaughtered three from FNC before moving into their base, killing the remaining two, and demolishing the first Nexus of the Group Stage. The second game of the day was a clinical victory for RNG over CG. They played exactly to their bot-lane centric style and simply outperformed CG in the mid-late game stages. But it wasn't perfect from RNG. Xiaohu was baited by a manaless Damonte into his own jungle, where Lira appeared and helped his mid laner get First Blood. Soon after that though, a skirmish broke out in the top lane, where RNG went up two more kills. To make matters worse, RNG's Ming killed CG's Vulcan in the isolated bot lane 2v2.

With this lead, RNG cleanly pushed forward. They narrowly took the First Tower bonus in the bot lane before CG could top. Then, at 14 minutes, they decided to take a fight which they won two-for-one. RNG knocked down a couple more towers then began to stall out a bit as they set up for Baron. Funnily enough, it was CG who started up the Baron at at 26 minutes, but RNG was prepared and met them in the river. A team fight erupted, and though it looked good for CG at first, RNG ended up winning it two-for-one, taking the Baron right after. When they began to siege, Ming nabbed Cody Sun with a Blitzcrank hook, which allowed RNG to easily destroy two Inhibitors. Finally, they sieged top, where CG made a desperate engage. RNG swiftly turned it around and killed three before demolishing CG's Nexus. The 2018 World Champions, IG, kicked off their tournament run with a win over AHQ. Though it ended up being fairly decisive, AHQ did make some great moves in the early game. Their ADC, Wako, killed JackeyLove in lane for First Blood, then Alex ganked mid to get a kill for Rainbow before taking a Mountain Dragon and the Rift Herald. AHQ also claimed the First Tower bonus in the bottom lane at 16 minutes. All IG was able to do during this time was to sneak away an Infernal Dragon.

But suddenly IG came online. They dove and killed Ziv in the top and afterward went mid to win a team fight two-for-one. Now that IG was grouping up, everything seemed to come together. They traded one-for-one in a middle lane team fight but came out on top of the play with a second middle lane tower take. At 25 minutes, IG secured their second Infernal and managed to catch out Ysera, which allowed them to push and take the middle Inhibitor. A few minutes later, IG started the Baron, forcing AHQ to approach the pit. IG immediately turned and obliterated four of AHQ's champions in their own jungle before rampaging through their base and smashing the Nexus. The fourth game of the day was quite a close one, but in the end, NA's TL defeated Korea's DWG. Both teams played to their typical win conditions and it made for a tense match. TL Xmithie started things off by killing an Infernal Dragon, then moving bottom to get First Blood onto Nuclear. But Canyon ganked mid to get a kill for ShowMaker a minute later. Next, there two fights around the second Infernal Dragon and Rift Herald. Though TL got the Infernal, DWG won both of these fights two-for-one and the Rift Herald. This helped DWG to obtain the First Tower bonus too.

DWG seemed to be solidly in control of the game at this point. This was even truer when there was yet another team fight around the dragon, where DWG swept TL four-for-two. It was going well for them until 22 minutes. Here, Impact surprised Nuguri and all-in'ed him, solo killing him and forcing DWG into a team fight where they lost two more members. From here, TL rushed over to the Baron and secured it without contest. This Baron didn't ultimately do much, so TL waited for the second Baron to spawn. When it did, both teams met at it and fought once more. TL massacred DWG at this point, with Doublelift popping off and getting himself a Quadra Kill. With no one left to defend, TL pushed right down mid and blasted DWG's Nexus. 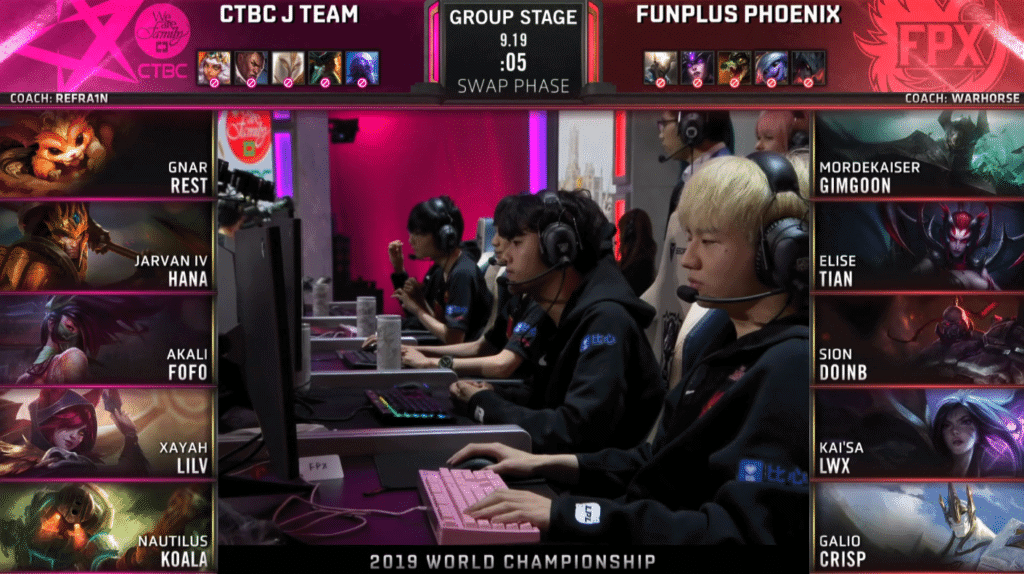 Before the group stage started, FPX was seen as far above the rest of the teams in Group B. But in this match, JT pulled off an upset win and made many question FPX's strength. The cards were stacked against them as well, as FPX three-man dove Rest at five minutes and killed him for First Blood. They also secured nearly all of the dragons throughout the game, including a monstrous three Infernals. But JT miraculously outperformed FPX in the team fights and found advantages that way. The first of these occurred at 14 minutes, where JT went three-for-one in kills.

It didn't get any better for FPX as the game went on either. At 25 minutes, an engagement happened near the dragon pit, where JT smashed FPX four-for-one. They took the Baron Nashor on the back of this play too. FPX briefly rebounded by picking off Koala, who mispositioned in the jungle, then taking both the third Infernal and Hana's life. But JT soon regained control as they fought near the Baron to kill three from FPX. They nearly ended the game with this Baron but were repelled. Once they regrouped, the Elder Dragon had spawned, which would've given FPX a massive damage buff. Both teams had to meet here, but it was to the benefit of JT, as they clean Ace'd FPX, rushed their base, and smashed their Nexus. To wrap up the day, SPY won on home soil over the VCS representatives GAM. Despite GAM's aggressive composition, they were unable to get anything done in the early game. This worked perfectly for the late-game centric SPY lineup. In fact, it was SPY who got all the kills in the early game, as the SPY bot duo dove and killed Zin for First Blood. SPY then killed Kiaya twice and amassed a collection of neutral objectives, including dragons, the Rift Herald and the First Tower bonus.

Throughout the early game skirmishes, Humanoid picked up a nice set of kills for himself. He was a major driving force in the match and assisted his team in furthering their lead through tower takes. But GAM finally made a play at 25 minutes, when Levi assassinated SPY's mid laner and his team helped him kill Norskeren too. But this didn't matter much, as right when both of them respawned, SPY rushed and secured the Baron. This buff was too much for GAM's composition to handle, so they lost multiple towers and an Inhibitor. They tried to catch out Vizicsacsi in the bottom lane, but SPY collapsed and turned it into a 5v5. This is where they excelled and easily routed GAM, killing four of their members. This was everything they needed to push straight into GAM's base and blast their Nexus.