Allow me to preface this article by saying that I expect the usual bans of Aatrox, Urgot, Alistar, Heimerdinger, and Tahm Kench to come through without further explanation required. The picks are either incredibly strong in and of themselves, or are well-known pocket picks for players in this series.

I wanted to explain some of the reasoning between some of the other prominent picks and bans (and pairings) heading into this series, so please - read on! If their series versus KT Rolster is anything to go by, IG really, REALLY don’t want to pick Nocturne for Ning. Whilst the living nightmare could possibly be the most influential jungler on this patch - 6 seconds of Paranoia/darkness in a meta with already-limited vision is too good to pass up - the IG jungler hasn’t shown a preference for this champion.

It seems odd to say that, simply because Nocturne is your perennial farm-til-6 champion, and Ning’s signature Zac pick (which, sadly, takes far too long to ramp up in relevancy in this meta) is another that likes to do just that. I’m sure that IG have their reasons for not wanting to play it - a shame, especially considering two major factors that the pick brings to IG as a team. Firstly, Paranoia’s engage potential would do well to catch out G2 attempting to play their 1-3-1 style; and secondly because Paranoia can serve as a very reliable disengage tool whilst IG attempt to play their own splitpush style off of the backs of TheShy/Duke and Rookie.

Nocturne’s relative strength paired with Jankos’ proficiency on the pick results in another must-ban for IG, alongside Hjarnan’s famous Heimerdinger and the potential Tahm Kench from Wadid - presenting a very scary possibility where all three of IG’s initial bans are already committed prior to the series even beginning. You may be thinking “hey, I understand why Xayah and Rakan might be grouped, but Galio and Xin Zhao? Really?” - and you would be absolutely correct to do so, if it weren’t for IG’s - and occasionally G2’s - recent drafting habits.

Xin Zhao has, since his return to the meta as a viable early-game aggressor, been a champion that wins out in almost any 1v1/2v2 scenario, thanks to a combination of his raw damage / base numbers and the utility his kit brings to the table in a smaller skirmish. He is, however, tragically fragile, and susceptible to being collapsed on given his tendency to play aggressively - after all, what’s the point in drafting the best early game jungler if you aren’t going to invade?

Enter Galio. The stoneskin gargoyle provides Xin Zhao with a midlaner capable of shoving waves in early on, facilitating his early invades thanks to the additional pressure and ability to freely roam should a contest for a scuttle crab or a countergank arise. After level 6, the threat of a Hero’s Entrance directly ontop of whatever enemy champion Xin Zhao is currently stuck to - Audacious Charge is disgusting at times - means that there is a very limited window of opportunity for playmaking from the enemy mid/jungle prior to the 10-15 minute mark. For all intents and purposes, these champions have been interchangable when it comes to their team compositions - Rookie either gets both banned against him, or secures the one that was left open for himself in IG’s post-5th-ban phase.

Whether G2 opt to ban one, or both, there’s always a distinct possibility that IG choose to take either of these somewhat-purple mages off of the table themselves. All that can be said at this point is that both of these heavy-impact midlaners are sure to be present in this series, especially considering the recent form of both midlaners.

We may even see a skill matchup where Rookie gets one of these champions and Perkz gets the other - but from what we’ve seen recently, that matchup has started to tilt in the favour of the LeBlanc player.

Viktor top has become prevalent enough in a short period of time that we’ve seen multiple players start grinding solo queue with it - professional or not (the pick has around 20% presence in the toplane in Korean solo queue).

It seems as if the overnight sensation hadn’t quite arrived in Busan in time for Wunder and TheShy to take it to the rift, as in G2 and IG’s quarterfinals appearances the pick was notably absent entirely. And yet, I think we can all assume that the pick will be present in their semifinals series here - the champion simply outclasses melee toplaners in the lane phase, oppressive through his range (and Iceborn Gauntlet itemisation) and the fact that he can transition to a more comfortable teamfight phase relatively smoothly.

These are just a few of the picks/bans that we can expect from what is sure to be a phenomenal series. G2 and IG have already made history, but only one of them will continue that legacy onwards after tomorrow.

Maybe it’ll be the one that picks Viktor top. 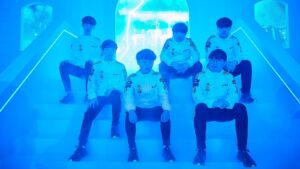