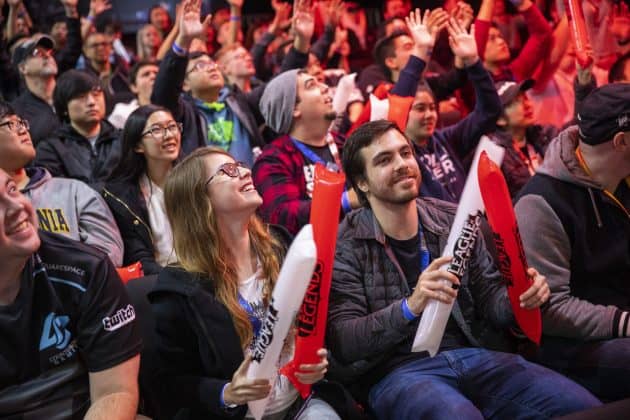 100 Thieves (“100T”) snagged their first win of the split in their match versus Golden Guardians (“GGS”). They started off strong with AnDa counter-jungling Contractz effectively and nullifying any pressure he could have. First Blood did go to Contractz however, but 100T did get a trade kill back. 100T kept pressuring the map, killing a Cloud Dragon, Rift Herald and the enemy mid laner. They did well in keeping GGS on the back foot, constantly rotating to take towers and picks.

At 21 minutes 100T won a team fight, killing two members for none. This advantage translated immediately into a Baron and they went to town. They demolished a few towers before the buff expired, then disaster struck. GGS engaged in the middle lane, and miraculously won a fight four-for-two. They also found another kill onto Ssumday shortly afterwards.

GGS then found two more kills and lost no members, which prompted them to start Baron. The three remaining 100T players decided contested GGS' Baron, despite the risks. The three played it flawlessly, with Ssumday's Akali coming up huge. He forced Contractz to Smite early for health, then stole the Baron! 100T Ace'd the dispirited GGS roster and took back the lead.

Now at 31 minutes, 100T sieged all three lanes. They quickly destroyed the top lane Inhibitor, then the bottom one. After a quick reset, 100T regrouped middle to take the last Inhibitor. GGS desperately tried to force one last fight, but it was no use. 100T couldn't be stopped again, as they killed more GGS players. Only Contractz was left alive to see the GGS Nexus fall at 33 minutes.

Echo Fox (“FOX”) won the second game of the day against OpTic Gaming (“OPT”). OPT was able to kill Solo for First Blood by himself, but after that FOX was in full control of the game. They killed the first Mountain Dragon, the first of six in total Dragons, at five minutes. The FOX bottom lane was practically donated a kill when Gate used his Abyssal Voyage away from Asta, leaving him vulnerable. From here FOX continued taking Dragons and Towers, growing their gold lead more and more.

It took 17 minutes for the First Tower to fall, and the bonus gold went to FOX. OPT managed to trade that and a Dragon for a top lane tower and Rift Herald. These would prove ineffective to claw back their gold deficit. FOX secured an Infernal Dragon and another tower in the following minutes, and both teams eyed up the Baron all the while.

But this didn't last too long. At 27 minutes, a team fight erupted in the middle lane. FOX got two quick kills and slayed Baron Nashor with the man advantage. Though they only destroyed a couple of towers, they were pushing their lead.

At 33 minutes another major team fight occurred. This one was more even, but FOX did come out ahead in a two-for-one. Instantly they turned for Baron and secured it after getting another kill onto Dhokla. FOX split up to siege two lanes, and the final team fight exploded. FOX decimated the OPT line-up, killing four members in the fight. The last OPT member was killed trying to stall the siege. All five OPT players could only watch in their grey screens as FOX destroyed their Nexus at 36 minutes.

Team Liquid (“TL”) continued their lossless streak by defeating Clutch Gaming (“CG”). Their dominance began early, with Xmithie ganking bottom and getting First Blood for his team. CG was able to get a trade kill, but had to use a lot of resources for it. CG wasn't out though, as they had full control over the first two Dragons and went even in a 12 minute skirmish. TL did eventually pull ahead though when Xmithie stole an Infernal Dragon away from CG. They also secured the First Tower bonus shortly after.

At 21 minutes, a series of objectives trades went relatively even for both teams. Three minutes later, both teams set up around the third Infernal of the game, hoping to get the extra damage stats. CG caught out Impact on the flank as TL slayed the Dragon. Despite being down a member, Jensen's Aatrox smashed CG, killing two of their players.

The game slowed down for a bit from this point. TL continued to push their advantage by taking a couple of objectives and with a narrow team fight win, but there weren't any major outcomes. That was until Piglet was targeted and killed at 34 minutes. With their ADC down, CG only watched as TL secured the Baron buff.

TL used this buff to close out the game very easily. CG was down a massive amount of gold now, and had to hope for a miracle in a team fight. Unfortunately, the miracle never arrived in the last team fight, which broke out at 36 minutes. TL slaughtered three CG players with ease. The NA super team was swift with their opening, quickly destroying CG's base and finishing off their Nexus at 36 minutes.

FlyQuest (“FLY”) made some clutch plays to dominate Team SoloMid (“TSM”). The early game was slow, but Santorin obtained First Blood in a top lane two-versus-two. A few minutes later, WildTurtle killed both TSM bottom laners in lane, propelling him to a decent gold lead. TSM tried to pull back the lead by going for the Rift Herald, and they got the objective, but lost three kills for it. A later team fight near Baron ended in a nice pick for TSM but didn't result in much.

FLY started winning team fights again, but by a very narrow margin. By 29 minutes TSM was tired of waiting and slowly losing the match. They decided to try and rush the Baron, and it was getting low. It looked like it would be a 50/50, but then Pobelter's Zoe popped into the pit and Smite secured the Baron with a Smite she picked up earlier! FLY killed two TSM players in addition to the Baron steal. With it, they instantly pushed to destroy two towers and the middle Inhibitor.

FLY brought down another couple of towers and an Ocean Dragon, but couldn't finish TSM off yet. A 34 minutes team fight went in the favor of FLY and allowed them to get another Inhibitor in the bottom lane. Two minutes later, FLY relaxed their pressure just enough for TSM to see an opening. TSM, like earlier, tried to rush the Baron. Unfortunately for them, Santorin got the Smite down to secure the buff for him team. All FLY had to do was stop TSM's backs as V1per Teleported into the base. He destroyed the Nexus by himself at 37 minutes, before TSM could back to stop him.

Counter Logic Gaming (“CLG”) asserted themselves as the better blue team with a win over Cloud9 (“C9”). It started decently well for C9, as Svenskeren got First Blood onto PowerOfEvil at an early three minutes. C9 pretty much donated the match back to CLG though when they tried to invade CLG's red buff. CLG collapsed and fought better, and picked up four free kills. CLG had full control over the Dragon pit and secured two early Oceans. They continued to choke out C9 with a five-man bottom play and destroyed the tower there for the First Tower bonus.

CLG made big strides after the 20 minute mark. After picking off Nisqy, they were able to get a two towers and a Mountain Dragon. Shortly after CLG started the Baron, and after killing three C9 members, they snagged the buff. They only took a couple of towers though, as C9 managed to pull off a team fight win to stall the siege.

The match stalled for a short while because C9 found a pick onto Wiggily. But C9 were powerless to stop CLG from taking a second Baron buff at 34 minutes. A minute later, CLG took their sixth Dragon of the game too. They efficiently pushed the middle and bottom lanes, taking multiple structures. C9 desperately tried to force a team fight, but CLG put them in the dirt. They killed multiple members before finishing C9's Nexus at 37 minutes.