LCS Summer 2022 only has two more games left to play before the champions are crowned.

After one of the most exciting playoffs in recent memory, Summer Playoffs are near the finish line. The remaining three teams will clash in Chicago’s United Center for a better Worlds 2022 seeding, and to be the eventual LCS Summer 2022 champions. A fun fact about the three teams we will see in the Finals Weekend is that they are the teams who won the title in the last three splits (C9 Spring 2021, 100T Summer 2021 and EG Spring 2022).

The weekend will start with the Lower Bracket Finals game between 100 Thieves and Evil Geniuses, the winner of which will move on to face Cloud9 in the last game of the Summer Split. The Lower Bracket Finals are especially important this year, as the loser of that game will have to play in Worlds Play-in Stage, which is very stacked this year with LEC having an extra team in there. All three participating teams had a very long road up to this point, and the Finals Weekend seems to promise more great League action to the fans. So let’s have an overall look at the teams and what can we expect from them.

Ahead of any conversation about this matchup, we should first talk about the unfortunate circumstances around it. This Tuesday, Evil Geniuses announced that their young ADC Kyle ‘Danny’ Sakamaki would be taking a break from the team “in order to focus on [his] mental health,” and the EG Academy ADC Hasan ‘Kaori’ Şentürk would be his replacement.

With love regarding our League roster for Chicago.
Thank you for understanding and sending nothing but amazing vibes for the forever Prince of Pentakills. pic.twitter.com/cMvZqqNtiH

Danny’s underperformance during the LCS Summer 2022 Playoffs has been a constant talking point among the fans as he hasn’t been putting up the carry performances he was famous for, while also showing some issues with his champion pool. Despite his issues, Danny still had some good moments during EG’s Playoffs run. For example, he had the highest DPM of all ten players in the TL series, even putting up a staggering 42% damage share in Game 5.

But it’s not all over for EG. Kaori, a TCL import, has been the shining star for a not-so-good EG Academy team. According to many, he is a top two ADC in the league with the TL’s Sean ‘Yeon’ Sung. And while he is new to the LCS, he had multiple playoffs experience back in the Turkish League. He also has a champion pool that fits into the meta, e.g. plays Kalista and Lucian, which can help with drafting.

If Kaori can step up to the plate, the rest of EG has been on an upward trajectory. Impact and Inspired had a much better series compared to the one against C9, and Vulcan was one of the best players in the TL series. But the most important factor for EG before Saturday’s game is the resurgence of Jojopyun. He was already on a hot streak after his Swain performance in Game 5 against TSM, but he had multiple carry performances against TL. It looks like the Rookie of the Year is peaking just at the right time.

On the other side, this roster of 100 Thieves has been one of the most reliable teams in LCS ever since they got together. They won the 2021 Summer Split after they added Felix ‘Abbedagge’ Braun, and made the Finals again the next split. Even with the community doubting their performances during some parts of regular seasons, they’ve never failed to show up once the Playoffs started.

The 100T bot lane has been one of the best in the league this year and considering EG will be playing with a stand-in at the ADC, it can give the Thieves a big advantage. 100T bot lane loves to play Lucian/Nami to gain early advantages, and TL showed that EG’s bot lane can be really susceptible to early ganks and dives.

They are very evenly matched on the top side either. While EG was able to gain some advantages by putting Impact on carry champions like Gankplank, Ssumday is a lot better at playing weakside and still contributing massively in teamfights. And talking about teamfights, EG and 100T were the two best teams when it came to just 5v5 their opponent and winning games that way. But with Danny out, EG is at a heavy disadvantage at this aspect of the game. So unless Kaori can just slot in enough to make up for it or unless EG can punish 100T’s overaggressiveness as C9 did, 100 Thieves should be the favorites to make it to the Finals day. 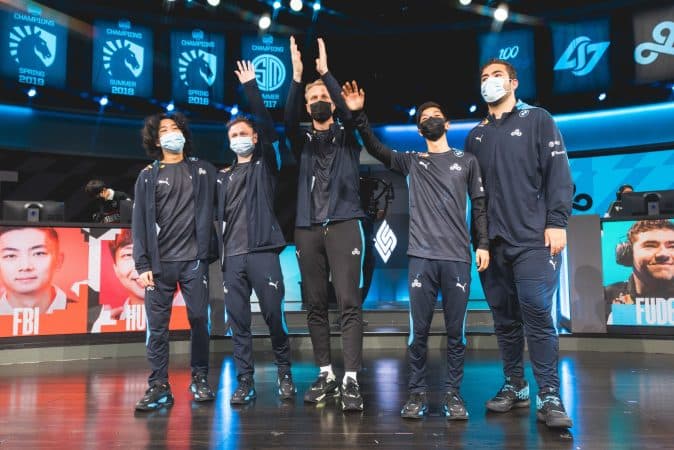 A fun fact about Cloud9 from the most recent episode of JLXP, C9 made Finals in at least one split every single year of LCS. It shows that the organization itself is not a stranger to a culture of winning. Not the mention every single player in their current roster has won at least one LCS trophy, except Kim ‘Berserker’ Min-cheol who is arguably their best player in this current run.

Still, they were nowhere near close to being a Finals favorite this split, not at the start of Summer and not even just before the Playoffs. Not many expected this team to 3-1 both EG and 100T, especially against a not-so-good series against CLG. But they were able to overcome any obstacle put in their way, and showed that they are the best team in the league at the moment.

Their individual performances are of course leveled up from the regular season. Their bot lane duo has always been a force to reckon with during the late game, but they are doing a lot better in lane this postseason. It also helps a lot that Fudge and Blaber minimized their mistakes, especially in the early game. And with them being one of the few remaining teams that can get consistent draft advantages using top lane counter picks or pocket picks like Nilah, it looks like they will have the upper ground in the Finals this Sunday.

For more coverage on LCS during the Summer 2022 Playoffs, follow us on ESTNN.