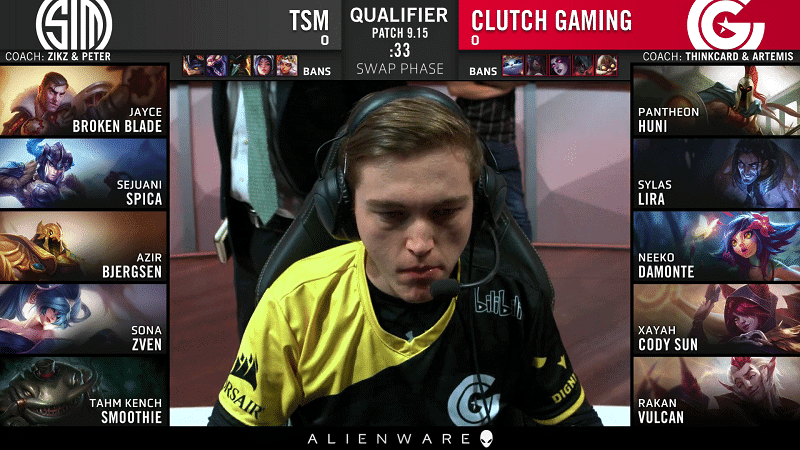 Team SoloMid (“TSM”) took the first game of the series although they stumbled many times throughout the game. Clutch Gaming (“CG”) started off the action with an early Ocean Dragon take. They used the extra map mobility of pre-rework Pantheon to prevent any losses from the play. TSM turned their luck around at the Rift Herald. Despite CG taking an early kill for the first blood, TSM persisted in the fight until they gained three kills and the Herald. TSM then carried this advantage into a solo kill in the top side and the bot-lane turret, gaining them a substantial 3k gold lead at 15 minutes. Just when it looked like CG took an advantageous fight, TSM turned it around for a 2-1 trade.

Both teams continued to trade blows, with CG taking a kill and the Mountain Drake but losing the mid tower. CG used their AoE ultimates to zone TSM and manage a team fight, trading two for three. TSM used their poke to gain a health lead and push to the Baron. Through a series of plays, Clutch found two fights for a total trade of 4-2. Just as CG looked in a dominant position, TSM found a pick and took the Baron for two unanswered kills, but Damonte kept the game even by pushing through the bot lane to trade inhibitors. CG didn’t slow their pressure however and found a dream team fight and took three free kills. Clutch forced a final fight but lost four members without gaining anything, and TSM closed the game soon after. 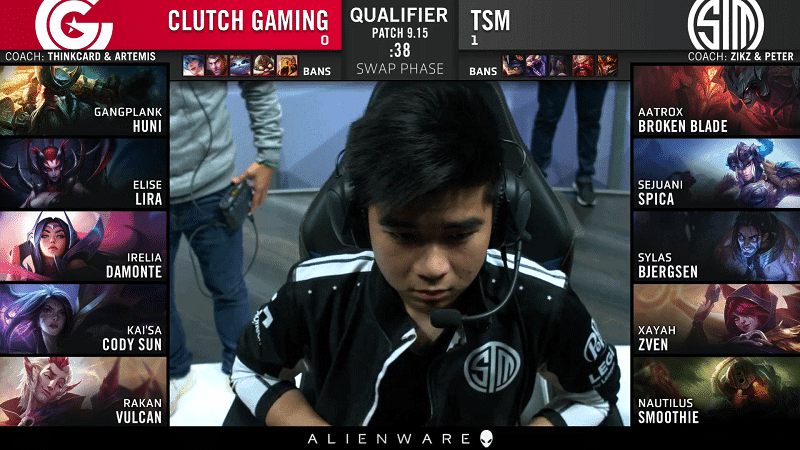 TSM barely scraped by in Game Two even though they found a 2k gold lead at six minutes. Two back-to-back tower dives gave TSM another early advantage. Both teams found kills under enemy towers, but TSM reacted to CG’s dive to trade up 4-2. Broken Blade soon fell to a dive, putting CG right back into the game. TSM kept up their tempo and dove the bot side, taking another advantage in a 3-1. The bot dives continued, giving TSM two free kills and the Cloud Dragon. They then took and used the Rift Herald top to secure the first turret for themselves. Although they fell behind, CG continued to look to trade up. They traded two towers for one and Lira even bought a Mejai’s, but TSM continued to find picks on Damonte four times in a row, putting him at a 0/5 score.

Despite CG finding an unanswered pick onto Broken Blade, TSM maintained in complete control and took the third Infernal Drake, giving them an almost uncontestable lead. TSM over forced a play but went even in a 2-2 fight. TSM continued to fumble their advantage, forcing Baron twice in a row, resulting in a total 5-2 trade and the Baron going in CG’s favor. CG, finding a solid advantage for the first time in the series, were then able to run through mid and take the inhibitor, putting the total team lead and the tempo of the game in their favor. TSM finally found a fight, winning it five for two and ending the game immediately after. 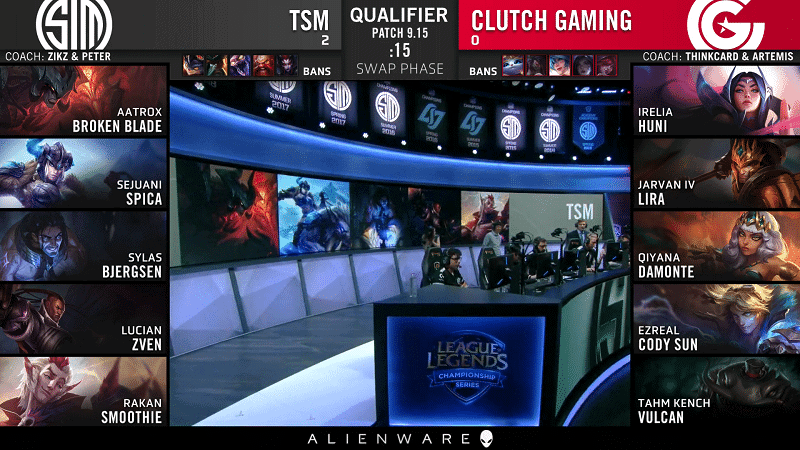 CG showed life in the series, taking Game Three with the signature Qiyana pick. They took the advantage early for the first game of the series. TSM attempted to force ganks in the mid lane, but Damonte showed his prowess on his famed Qiyana and avoided them twice without losing summoners. Huni and Lira chased Broken Blade through the top lane turret and found a kill on Spica after he flashed to get a kill but fell short. TSM found two free kills in the river by catching Huni when he pathed from top side. The action continued as TSM took the Infernal Drake, but CG picked off two as they moved off the objective.

Spica found another pick in the river and picked up the Rift Herald. Damonte picked Broken Blade. Both teams refused to be outdone. Both mid laners were picked off in the top lane and CG picked up the first tower in the bot lane. CG traded a second Infernal pickup for the top lane turret but found a pick on Zven and took the two more towers in the mid. Zven was the only one protecting the mid lane for TSM again and CG capitalized. Huni flanked and the proceeding fight resulted in two free kills, the mid-lane inhibitor and the Baron for CG. They soon after closed through the bot lane to bring the series to a game four. 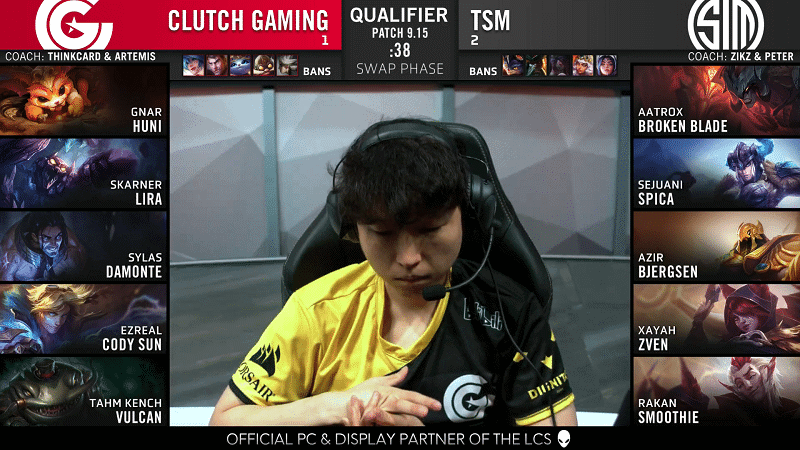 CG used their pocket pick Kog’maw to secure the scaling advantage and the series win. They continued to surge through the series, taking a dominant Game Four with Lira leading the charge. Using Lira’s signature Skarner pick CG took the first two kills of the game in exchange for the Ocean Drake, giving CG an early 2k gold lead. CG took the Rift Herald for the first time in the four-game series. They soon after used it in the top lane to force an early 12-minute first tower in the top lane, but lost Lira in a subsequent pick. TSM found their opportunity in a top gank from CG. Clutch had set up for a 2v1 in top but TSM turned the play at the same time as they made one bot side. The resulting score was a 4-1 trade in favor of TSM.

CG continued to pressure TSM at every opportunity and quickly found two unanswered kills. They then moved to the river, pushing TSM off the Infernal and taking it for themselves. Huni jumped in bot lane but TSM had set a trap and narrowly took him down without losing any members. The teams traded objectives with TSM taking the mid lane and CG taking a second Infernal, but CG also took a kill. TSM attempted to force the Baron, but CG quickly responded, pushing them off of it. TSM then returned to it, got poked out, lost Spica and then the Baron without contesting it. Bjergsen attempted to force a kill on Huni, but he survived with a slimmer of health and returned for two kills and the game. 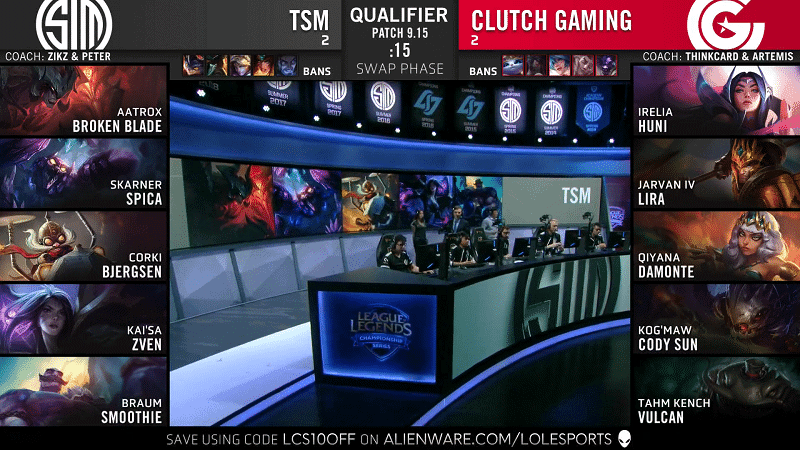 TSM preyed on Huni’s aggressive tendencies and took him down after a repeat gank in the top lane but CG took the Cloud Drake in response. CG returned the favor, taking a free kill on Broken Blade and a second Cloud Dragon. TSM took the top lane turret for the first of the game with no answer from CG. As the game played out in a lull state, CG found their opening at the Mountain Dragon. After they took the dragon for themselves, they engaged on TSM and traded up in a 4-3 fight.

CG took their advantage towards the Baron. They started it but turned to collapse with a double flank and taking a two for one. TSM went to Baron, but the decision quickly turned on them. CG rushed them and took four for one and the Baron, again. They then pushed through mid and bot to open the map and two inhibitors. After the bottom inhibitor, CG forced a 5v5 team fight to clean them out in a 5-1 trade and take the game.