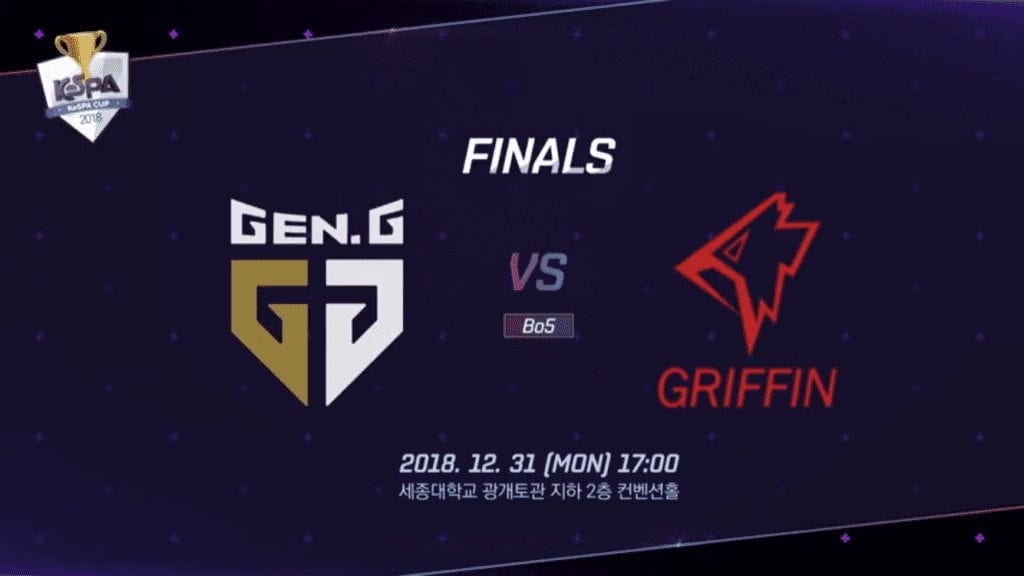 It’s time. Griffin has seized the chance to redeem themselves against the team that denied them a Worlds appearance in their debut split. GenG had the opportunity to show their fans that they’re allowed to have some hope for next season - after the worst performance of a Korean team at Worlds since Season 3.

Only a few hours have passed since the biggest series of the off-season - Korea’s best looked to show the audience just exactly what they’ve got in store for their redemption arc. Multiple disgraceful exits at the World Championship this year resulted in a complete overhaul in most rosters and now, perhaps unsurprisingly, we find ourselves with the two that changed the least of all having met face to face in the finals.

Griffin were the team that walked away victorious, your champions of the 2018 KeSPA Cup, but let’s explore some of the paths that led us to this crowning moment and milestone in Korean League of Legends history.

GEN G ARE ROX, KT, AND EVERYONE ELSE’S LIVING LEGACY

Kuro to China.
Gorilla to Europe.
Pray to Retirement (However Temporary).

For the two remaining members of the ROX Tigers lineup that took the world - and our hearts - by storm, two marked the end of one of their journeys through the KeSPA Cup.

I am, of course, referring to Smeb - whose KT Rolster dream team fell short to a revitalized GenG. Said GenG roster has been seemingly majorly rejuvenated with the addition of Peanut; the hyperactive, hyperaggressive Prince of the Jungle put on a show as he took over game after game. Even when relegated to more utility based picks like Zac, Peanut demonstrated a level of restraint and cool calculation that we have learned to not expect from him in the past.

PEANUT ALLERGIES AREN’T ANYTHING TO JOKE ABOUT

Peanut’s performance has been a pleasant surprise this tournament, and ideally - if you’re a GenG fan - will continue to be so this season. Credit where credit is due, however, as no one could have anticipated just how phenomenally Ruler would show up, especially with a new support at his side. The GenG marksman is one of only two remaining pieces of the World Champion roster from 2017; on that note, longterm teammate Cuvee also looks like a man reborn.

Fly came to GenG fresh off of some questionable performances in North America; while he is more consistent now, he still seemed only a few more deaths short of a liability throughout the last year. And yet, even when plagued with doubt concerning his mechanical prowess, Fly truly shines on utility-based mid laners. In this tournament alone, his flex pick of Urgot is basically a signature by this point - lending an additional dimension of mystery and threat to the GenG solo lanes in the draft, as well as facilitating relentless 1-3-1 compositions.

Fly is unique in the sense that he seems almost invisible in GenG’s losses, not feeding or dying but not really doing anything else, either. In Game 1 versus Griffin, his Zoe was less than impactful (albeit versus a Sion mid), and he was unable to find any footing in facilitating picks for a composition with generally inferior teamfighting. As mentioned in an earlier article, DamWon Gaming (comprised of five of the LCK’s hottest new prospects) systematically dismantled fan-favorite superteam SK Telecom T1 in their path to the semi-finals.

...and yet, “systematically dismantled” feels prematurely used at this point, after seeing what Griffin has done to our favorite newcomers. Jungler Tarzan lived up to his name, showing his opposing number (and a rising star in his own right) Canyon exactly who the king of the jungle is. Dominating performances, even on unconventional champion picks like Sejuani really drove home the win for them.

Also of note is Griffin toplaner Sword’s phenomenal Jayce play, using the pick as an answer to the omnipresent Viktor and Urgot - finding multiple solokills and, again, facilitating 1-3-1 opportunities. It was this performance that led GenG to ban Jayce in the first game versus Griffin.

This team has multiple carry threats across every lane, something to their favor over GenG.

VIPER’S FIRST CASSIOPEIA OF THE TOURNAMENT

Perhaps ever so slightly disrespectful of GenG was the fact that they decided to give Cassiopeia to Griffin. A phenomenal flex pick that finds success across no less than three lanes, it was Griffin’s marksman that took his somewhat of a signature pick straight to the top of pick/ban priority again. Early 2v2 kills onto Ruler’s Ezreal (who had a Tahm Kench by his side, nonetheless)
further demonstrated Griffin’s power on the pick in the opening game of our series.

Griffin intrigued audiences and analysts in this series, in part due to their choice to select their jungle pick last. Kha’zix as a counterpick for Tarzan didn’t really pay off, as he was unable to snowball early like the champion prefers to. Sejuani, on the other hand? A highlight play was brought to the attention of multiple audience members on Twitter, with Tarzan executing a perfect tower dive mid - tanking multiple shots, using stopwatch to survive with a slither of health and sidestepping an Ezreal ultimate for good measure.

Tarzan is the jungler to watch for 2019, and the future looks bright for a Griffin lineup spearheaded by this promising newcomer.

This series was undoubtedly explosive - and hopefully, Game 1 being considerably closer than the other matches this tournament is a sure indication of the competitiveness within the region.

This was the last series of 2018, and the last chance for Korea to show that the latter half of 2018 wasn’t all doom and gloom - promising rookies across the board indicate just how bright the future is, whether it’s for:

The Region as a Whole.