The Semi-Finals of the IEM Dallas 2022 is done and the two teams that will clash for the trophy in the Finals are settled.

The week is almost over and we are nearing the end of IEM Dallas 2022. Now with the Semi-Finals done, we only have one more matchup in our hands. The first LAN event with an audience in almost two years will crown its champion after a series between ENCE and Cloud9 who obtained their victories in today's Semi-Finals.

FURIA kept their pistol streak from yesterday alive by winning their first T side round. However, ENCE started to turn away the momentum once the guns came out, defending FURIA and Andrei ‘arT’ Piovezan’s A ramp aggression thanks to Pavle ‘maden’ Bošković and Olek ‘hades’ Miskiewicz. FURIA was having trouble cracking A site defense despite continuous lurk attempts from Kaike ‘KSCERATO’ Cerato, while ENCE stand-in Janusz ‘Snax’ Pogorzelski had more success with his flanks. On the other side, any attempt to breach the B site was shut down by Paweł ‘dycha’ Dycha for a 10-5 halftime.

FURIA started the second half with the pistol win and with a focus on aggressive B stairs pushes. But maden’s A ramp play gave ENCE their first T side gun round. In the second half, the momentum changed similar to yesterday’s Vertigo game as FURIA’s CT side holds and retakes were once again on point as they took the lead at 13-12. ENCE found a much-needed round to tie it at 13 and they got the lead the round after, both thanks to A ramp entry kills from maden. In round 29, ENCE once again went to the A ramp, and maden got them to the match point with two more entry kills. ENCE then closed the map out with a surprisingly fast B hit with a Marco ‘Snappi’ Pfeiffer 4k.

ENCE gave FURIA their first pistol round in the Playoffs in their T start on Nuke. They also won the first gun round after a perfectly executed 2v3 from Snax and Snappi but gave away an eco round to Rafael ‘saffee’ Costa’s CZ75. In the next round, saffee clutched a great 1v2 and got the defuse at the lower site once again. FURIA was more disciplined in their play after a timeout as they tied the score at 5-5, and a KSCERATO 4k gave them the lead. André ‘drop’ Abreu and arT also stepped up big as FURIA guarantees a first-half lead, 8-5. ENCE with a force buy made things better by ending the half at 8-7.

ENCE started the second half with another pistol win after a 1v3 clutch from dycha. A quad kill from Snappi got ENCE to double digits, 10-8. ENCE’s A defense was on point with maden and Snax once again performing great. FURIA was so close to stopping the win streak of CTs as yuurih attempted a 1v5 clutch but failed at the end. With hades coming online with the AWP ENCE found the match point, but FURIA held on as drop snuck into the A bombsite. Another triple kill from hades and another great performance from the veteran stand-in Snax led to ENCE sending FURIA home with a 2-0. 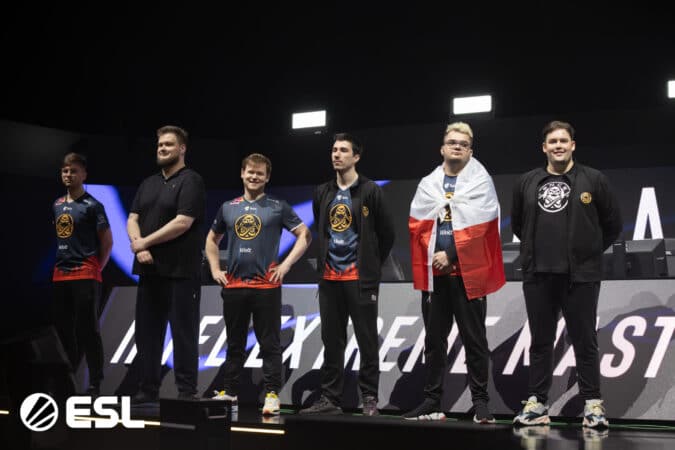 Cloud9 started the game with a pistol win and had an opportunity to break BIG’s early game economy but a 1v2 clutch from Florian ‘syrsoN’ Rische gave the advantage to the Germans. C9 were able to find good entry kills at both sites from Vladislav ‘nafany’ Gorshkov and Sergey ‘Ax1Le’ Rykhtorov to take the lead once again. C9 struggled to execute when they couldn’t find early kills as BIG did a good job to save utilities till the last minute. Still, they managed to get their 8th round with a sneaky A execute and an Ax1Le flank.

The second pistol round went to BIG after a 4k from the IGL Johannes ‘tabseN’ Wodarz, but they almost had a hard attack when they came close to using the round to USP-Ss. And a clean A site execute from BIG, even after Ax1Le’s aggressive fountain push led to two kills, tied the game at 9-9. BIG’s T side play was very patient as they went on an eight-round win streak, with Karim ‘Krimbo’ Moussa leading in kills. C9 finally answered with a B site hold, even though Tizian ‘tiziaN’ Feldbusch’s attempt and they made the score 14-9. But a great 4-man boost from syrsoN and a big 1v3 clutch from Krimbo gave BIG the map point. C9 held on to the first one despite a quad kill from tabseN. Abay ‘HObbit’ Khasenov and Ax1Le came alive at this point to carry C9 to the brink of overtime, but tabseN once again came in clutch and BIG won the game 16-14.

Cloud9 started Dust2 with a pistol win on the back of a double kill from Ax1Le. HObbit getting caught almost cost C9 a round but Timofey ‘interz’ Yakushin won the 1v2, but CT side wasn’t able to build their economy. BIG punished with a good A side pinch to get their first round, 4-1. But another triple kill from Ax1Le brought them back in their step. BIG started to pick up steam especially on the A site with tabseN going big with another triple kill in the series. When BIG went for their first mid-to-B split, interz was there waiting for his triple kill, and their A takes in the next two rounds were shut down by HObbit’s successive quad kills, guaranteeing them a halftime lead.

BIG won the second pistol round thanks to a great A site hold from Josef ‘faveN’ Baumann and tabseN. But a good execution from C9 kept them in the lead 10-9. BIG’s coordination wasn’t on par with C9’s and syrsoN couldn’t hit his shots, while sh1ro’s good form with the AWP C9 extended the lead. BIG couldn’t improve their performance and C9 closed the map out as we went to third map, Ancient.

Cloud9 started with a pistol win and even though Ancient is a CT-sided map, C9’s dominance over the first five rounds forced BIG to an early timeout. BIG needed a triple kill from tabseN to pick up their first-round and make it 6-1. BIG couldn’t make the A site work as they couldn’t get past the double AWP setup with Ax1Le, and even after a bomb plant a sneaky defuse from interz won C9 the round. BIG’s game plan wasn’t working as only tabseN had more than 5 kills while the score was 10-1. Despite coming close to winning more rounds, nafany and sh1ro came in clutch multiple times and C9 led the halftime at 12-3.

BIG attempted a retake for a much-needed pistol round but a double kill from HObbit shut them down. TabseN had a great flank but sh1ro caught him and C9 extended the lead to eleven rounds. BIG didn’t have to get their rifles out on the CT side as they had to keep forcing, and C9 took the advantage to write their names to the second Grand Finals spot against ENCE.

You can watch the Intel Extreme Dallas 2022 Playoffs on the official ESL Twitch channel.