Fortnite's European scene ended 2020 with a bang during DreamHack's third regional tournament of the month. Several thousand players registered, but only 50 duos remained standing after two open heats and the semi-finals. Multiple household names, including Benjyfishy, MrSavage, Crr, Wolfiez, TaySon and Andilex reached the competition's last leg. Six intense matches separated some of Europe's best players from the glory of a DreamHack Online Open victory and $12K USD to split. Both competitors and viewers could not ask for a better end to the year.

Two-time DreamHack Champion teeq rounded out his 2020 with yet another DreamHack Open victory. After winning two solo competitions, teeq returned to the winner's circle again with duo partner Setty. The two players annihilated the competition with 401 points, including 32 eliminations and two Victory Royales, both of which occurred over the final two games. It's a scenario we've seen play out before, and it's safe to say that teeq understands the DreamHack format unlike any other. The two December DreamHack champs walked away with $12K USD each, and it wasn't incredibly close. 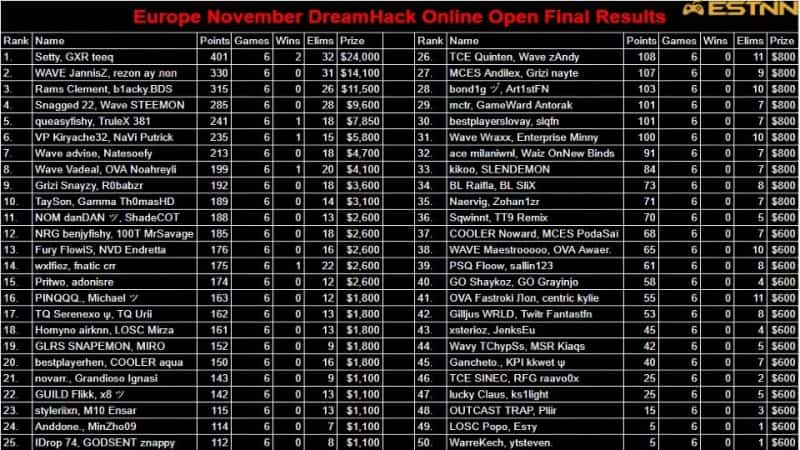 The 49 other Grand Finalists did not make it easy on teeq and Setty. Right behind the winners were former FNCS Champion Wave JannisZ and top competitor Rezon, who finished in second with 330 points. Rams Clement and b1acky.BDS rounded out the top three with 315 points. Some other notable duos inside the top 15 included Queasy & TruleX in 5th, VP Kiryache32 & Na'Vi Putrick in 6th, former winners Wave Vadeal & OVA Noahreyli in 8th, TaySon & Gamma Th0masHD in 10th and finally NRG benjyfishy & 100T MrSavage in 12th. The final DreamHack competition of the year did not disappoint, with so many outstanding teams in contention. However, no team could match teeq and Setty, who accomplished the unthinkable in arguably the world's most challenging competitive Fortnite region.

2020 might be coming to a close, but that doesn't mean we are slowing down! 😎

Take a look at the #DHFNOpen schedule for January. Sign-ups will open in January too! 👇

Before the final broadcast of 2020, DreamHack announced a format change for the European region. There will now be three heats instead of two, and 250 duos from each will advance to the semi-finals. From there, 50 teams will qualify for the Grand Finals, where they will battle across eight matches instead of six. DreamHack made this decision in response to the European scenes outcry, considering the unprecedented amount of entrants. The NA West region will kick off the next DreamHack Online Open competition late next month.