The Fortnite tournament at DreamHack’s Winter event featured some of the best players across the globe. Sweden’s own Elmia Convention Center played host to several hundred Fortnite competitors in a bring your own computer (BYOC) open event. There aren’t many LAN tournaments for Fortnite, so this would allow viewers a better look at the current meta. DreamHack’s Winter Fortnite tournament included a solo format and a slightly different point system that we typically see.

For this event, players would begin earning one placement point per player casualty after the fifty players remained. Ten points went to the player who took first place in each match. Additionally, competitors would earn five points per elimination instead of the usual one point in past tournaments. Overall, this yielded much higher scores, and strategies changed quite a bit per player.

This events leaderboard changed as much as anyone could expect with the vastly different scoring system. MCES Andilex took the win in match number one and would remain atop the leaderboard for much of the day. In game two, Arkhram of 100 Thieves came out on top with six eliminations and moved into fourth place. Match three produced yet another different victor with Sigma SvendPro achieving the Victory Royale. He managed three eliminations, and this result moved him into twelfth place for the tournament. Edison of Xypher Esports took first in match number four to push himself into fourteenth place on the leaderboard. The Swede put up five eliminations en route to victory. After four matches, Eon znappy held a one-point lead over NoFlex Merijn for first place with four games left to play.

Four matches remained, and the victory was still up in the air. Game five produced our fifth unique winner with wakie coming out on top with seven eliminations. Himself and Andilex climbed into the first and second place positions, respectively. With the competition winding down, match six came and went with Wave Jannisz taking first with six eliminations. Andilex managed a second-place finish with five eliminations, which catapulted him into first place on the leaderboard with three-hundred and eleven points. Two matches remained, and the top ten players were beginning to separate themselves from the pack. Fortnite World Cup Champion, nyhrox, achieved a three elimination Victory Royale in the penultimate game seven. He did so impressively with three eliminations and moved into sixteenth place.

With only one game left, NoFlex Merijn held a surprising eighteen-point lead over Andilex. With no Victory Royales through seven matches, Merijn needed to continue racking up eliminations and placement points to secure first place at DreamHack Winter. Unfortunately for Merijn, he encountered a matchmaking bug when queuing into the final match, which meant he could not add to his point total. He could only sit and anxiously watch as his lead would inventively dwindle. As match eight concluded, Dokko popped off with eight eliminations, but superior scolly earned the Victory Royale. With the final game in the books, the scores were in, and we learned who would walk away with the $30K USD grand prize.

Despite not making it into the final match, NoFlex Merijn’s three-hundred and twenty-nine points held steady, and he took home the tournament victory. Merijn watched his opponents play out the final game with the full expectation of losing his first-place spot. Fortunately for him, no other competitors were able to take advantage of Merijn’s situation. The fifteen-year-old Dutch player shocked the world with his first major Fortnite tournament victory. He did so without a single Victory Royale in any of the eight matches. Merijn relied heavily on crucial placement points and situational eliminations to achieve his first LAN victory. He finished top-fifteen in six out of his seven matches and compiled fourteen eliminations overall. 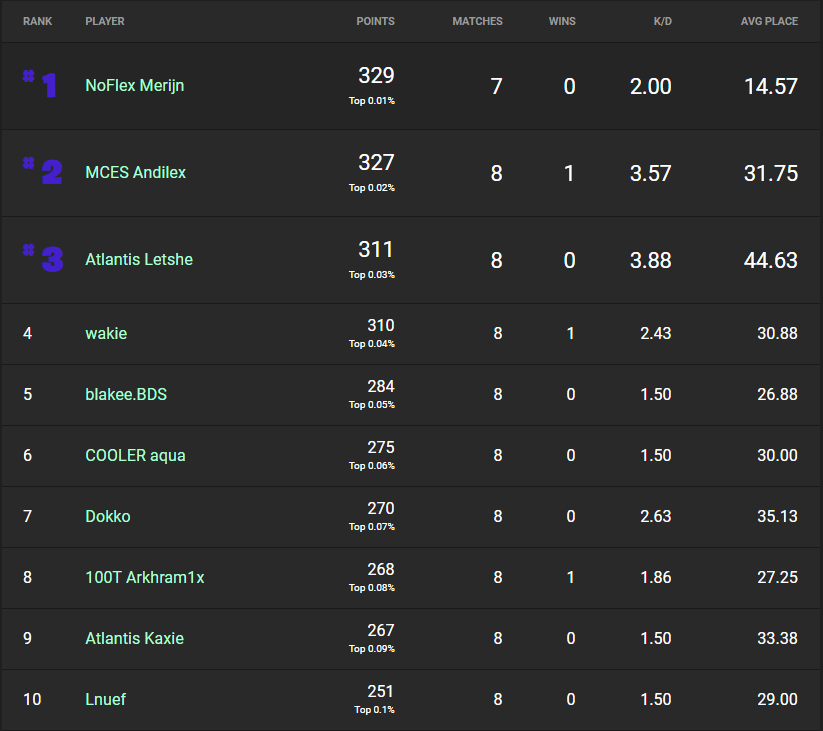 Congratulations to NoFlex Merijn on his insurmountable victory at the DreamHack Winter 2019 Fortnite event!