Day two of the Call of Duty Pro League Qualifier continued right where day one left off, providing tons of upsets and memorable moments (you can read our day one recap here). Several unexpected pool play results came through today which has left many veteran squads on the outside looking in and many amateur squads in stable positions to make it to year’s Pro League.

Without further ado, let’s get into the pools. 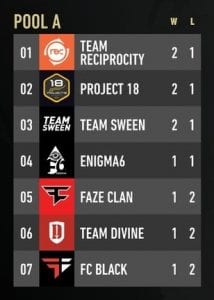 Team Reciprocity begins our discussion of confusing results on day two. After a 5-1 game five Search and Destroy comeback against a very strong Enigma6 team, they swiftly lost 3-0 against the previously winless Team Divine. Team Divine still sits at 6th place in the group, but with a win, they are very much still in the tournament. At one spot above Divine, in 5th place, is FaZe Clan. FaZe has struggled mightily in the tournament thus far due to a combination of factors; inconsistent slaying from former world champion James ‘Crowder’ Crowder along with frustrating team play contributed to a 3-1 loss to Project 18. Meanwhile, Project 18’s win set them up in second place in the pool, but with every team in pool A having both a win and a loss on their record, anything could still happen. Veteran viewers will know, however, that while FaZe has had their share of slow starts in the past, they’ve almost always found a way to turn their performance around when it matters.

Quietly slipping through all the drama today was Team Sween who quickly took care of business against FaZe (FC) Black. They sit in the three-way tie, by record, atop pool A at 2-1. The heavy Spanish flavor in pool B has caused their share of mayhem in the Pro League Qualifier as well. After a slow start yesterday, the Vodafone Giants came up with a big 3-1 win against the struggling veteran UK roster Lightning Pandas. They could not finish the day strong, however, as they fell 3-1 to Tainted Minds, giving Tainted Minds their first win of the tournament.

Fan favorite Team Heretics could not continue their winning ways from yesterday as they fell in a dramatic reverse sweep to reigning world champions Team Envy. Envy relied on a massive contribution from Justin ‘Silly’ Fargo to go along with their veteran composure to overcome insane performances from Juan ‘JurNii’ Antonio González and Alejandro ‘Lucky’ López. Nevertheless, Heretics have proven their talent and teamwork and will be a force to reckon with going forward.

G2 was able to rebound from their tough loss to Envy yesterday with a 3-1 win against previously undefeated Fact Revolution, setting up a very tight pool. And don’t fret yet Lightning Panda fans, they still have a game in hand and the requisite slaying power under the leadership of Dylan ‘MadCat’ Daly. However, their journey to the Pro League will face its toughest test yet early tomorrow against pool leaders Envy. Pool C is, by far, the most surprising pool of the tournament. Leading the pool at a shocking 4-0 record is Midnight Esports. Midnight proved they were not a fluke with a sound 3-1 victory over the talented and experienced Pittsburgh Knights (including a 250-54 game 1 hardpoint victory). They also beat previously undefeated Overtime eSports to cement their place atop the pool and all but guarantee their Pro League qualification.

Team Space was able to rebound from their tough day one with a swift 3-0 against pool C’s 2nd place team, Excelerate Gaming. Excelerate was able to rebound from this loss later in the day against Mazer Gaming, who they beat 3-0. Mazer Gaming, whose well-documented misfortune leading up to the tournament did them no favors, have yet to win a map in their three matches thus far.

The most befuddling team, arguably in the whole tournament, is 100 Thieves. Their 3-1 loss to the Pittsburgh Knights has them sitting at 5th in the pool. Their talent is undeniable; each of their team members won a major LAN tournament last year. However, their lackluster performances throughout the season thus far have left their fans wondering what could possibly be wrong with the squad. Confused roles at the beginning of the year, often embarrassing team play, and some lackluster individual showings have all contributed to this star-studded roster massively underperforming. Barring a miraculous game five comeback yesterday night, they would be on the verge of elimination.

All that being said, Austin ‘SlasheR’ Liddicoat and Ian ‘Enable’ Wyatt are some of the best leaders in all of Competitive Call of Duty. Moreover, while they sit in 5th place at 1-2, two of their three losses have been to the two best teams in the pool, and given Mazer Gaming’s struggles thus far, they are almost certain to at least make it to bracket play. However, time is running out for this talented roster to “figure it out”. Mindfreak built on their hot start to the tournament with a 3-1 victory against a struggling Imperial roster and a 3-0 win against the Spanish roster Movistar Riders behind the insane play of up-and-coming superstar Luke ‘Louqa’ Rigas. UYU were able to take care of business against last-place Nation of Power; hopefully, their 3-0 victory can spell stronger results in their Search and Destroy game mode going forward, especially considering the talent on their team.

The Movistar Riders also fell to Evil Geniuses to go 0-2 on the day after a 2-0 day one. They currently sit at 4th place in the pool, discouraged, but still within striking distance.

Evil Geniuses were able to rally from a painful game five loss yesterday with a game five clutch against a formidable Red Reserve squad. That result, along with their aforementioned 3-0 victory against Movistar have them in 3rd place in pool D.

Red Reserve continued their struggles from yesterday. Their 3-1 victory against Imperial was anything but convincing. They went on to finish the day with a frustrating performance against Evil Geniuses. It seemed that during each map a different player was struggling. Also while their stellar Search and Destroy record last season bailed them out of many a clutch situation, that has certainly not been the case this year.

What to watch for tomorrow:

If Lighting Pandas are to make any kind of run to at least secure a bracket play spot, they will have to come out strong in the first match of the day tomorrow against Envy. Following that up will be a fight for the second seed in pool C between the Pittsburgh Knights and Excelerate Gaming. To finish the day, FaZe Clan will have to begin their road to redemption against pool A leaders, Team Reciprocity. You can watch all of these matches on www.twitch.tv/callofduty or on ESTNN TV.