Moving into the final CDL Home Series of the season, we look at our updated power rankings following CDL London and heading into CDL Toronto.

The Los Angeles Guerrillas were sent home after two matches last weekend. Taking a 3-0 loss to the New York Subliners and a 3-1 loss to Paris Legion keeps them bottom of the power rankings. Only one player finished with a positive overall K/D for the Guerrillas, that player being their Main AR Blazt. This has not been a good season for LAG, and they finish bottom of the CDL Standings. They will start in the losers round at the CDL Playoffs.

Last week we mentioned that the Seattle Surge needed to have a bug performance at the London Home Series. Unfortunately for them, that didn't happen. They went 0-2 taking defeats to the London Royal Ravens and OpTic Gaming Los Angeles. While there was some controversy, it seemed like it was Octane vs London or Octane vs OpTic at times. Going into champs this team needs to come together and play for each other, forget what's happened and if they can play near to the same level as Octane, they could have a good losers bracket run.

Although they made the Final, Paris Legion stay in 10th place. This is because they need to show consistency. At the moment, they're right in the mix with Minnesota, OpTic and Toronto. Yes, they have improved, but not enough to be moved ahead of those three teams. An interesting point to note about Paris Legion’s run to the Finals is that no player on the team finished with a positive overall K/D this weekend. Compared to winners Dallas Empire, they had every player finish above a 1.10. So the slaying definitely needs improvement from Paris. 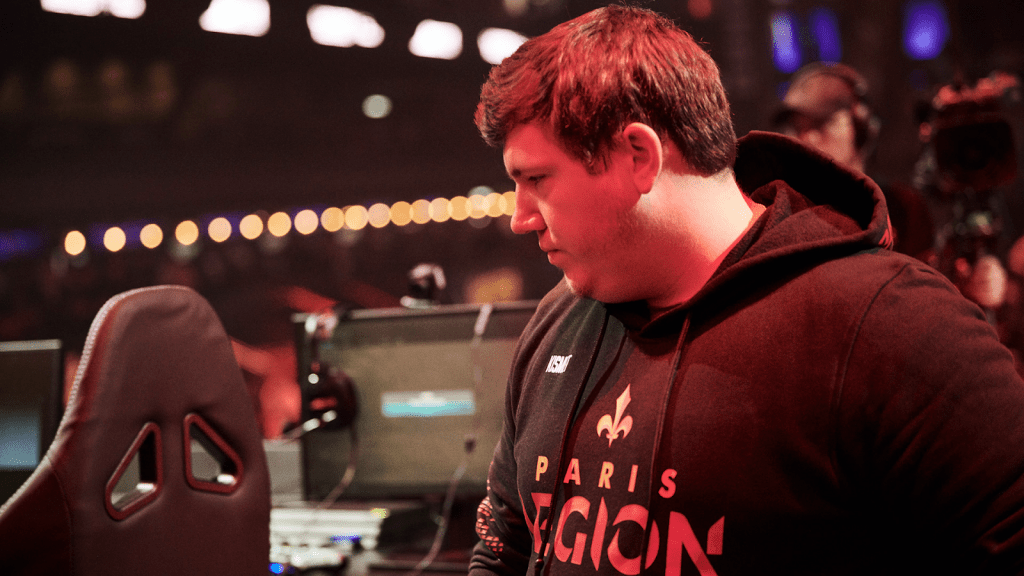 Minnestoa Rokkr didn't play last weekend in London however they move down a spot because of OpTic’s roster change. Minnesota sit 7th in the CDL standings with 120 points, this almost secures them a spot in winners round one at playoffs. Here they will need to return to their early season form if they are to make a run through the bracket. Their 120 points is likely to stay that way, as their group this weekend features Atlanta, Dallas and Florida.

Toronto Ultra missed the recent Home Series but return this week for their own. We haven't seen them play on this new meta that includes 10mm rounds, and this is a worry. As mentioned in last week's power rankings, they didn't outslay in an AR heavy meta without the 10mm. This may be a problem as we saw multiple MP5 players improve this weekend compared to last. However, being their own Home Series they will be looking to make a stance, and if they can win it all they'll move into those winners round one spots in the CDL Standings.

Our first improvement in the power rankings comes from OGLA as they move up two spots to 7th. The addition of Drazah and Hollow has definitely improved this squad. Drazah achieved the highest K/D in a match for OGLA this weekend at 1.67, but he also scored the lowest at 0.62. This shows that while these new young players can perform extremely well, if they get in that cycle of dying over and over again. It can be harder than ever to break out of. They take on the Toronto Ultra in game one this weekend, and this will be an absolute war as both teams are looking for those valuable CDL Points.

The London Royal Ravens stay sixth in our power rankings after losing in the Semi-Final of their own Home Series. They looked extremely strong this weekend, starting off with a 3-1 win against the Surge before reverse sweeping Florida put them into the Semis with a 2-0 record. Facing off against unlikely finalists Paris Legion, it was surely a victory for London, no? If London had played some SnD rounds slightly differently, this could've been a 3-0. However, they lost the series 3-2 and were sent home without their first chip. That was the end of their season, and they finish on 120 points, a total which should be enough to secure a winners bracket spot.

New York Subliners had a weekend to forget. They placed 5/6th with a 1-2 record taking defeats two 3-0 defeats to the Dallas Empire and Paris Legion. This was a complete polar opposite performance to their own Home Series which was only a week before. Their highest overall K/D’s came from Temp and Accuracy with a 1.03 and 1.01 respectively, so what went wrong for New York? We’re not sure, but this is the end of their season and they finish in fifth place with 140 points.

They didn't play in London, however they move down to fourth place due to Dallas’ incredible weekend. Moving into CDL Toronto, they have a group of death. Themselves, Dallas, Florida and Minnesota all compete for two spots in the Semi-Finals. However, after Florida’s recent performance, this group may not be as scary as it looks.

The Florida Mutineers move down to third place following their poor performance at CDL London. They won a game five round 11 vs OpTic, followed by being reverse swept by London. Their first two games were not pretty, and even after their 3-1 win against OGLA in a rematch, their 3-0 loss in the Semis was not what they were looking for. Even though their performances were not great, the usual suspects of Skyz, Owakening and Fero all finished with an overall K/D above 1.10. Moving into CDL Toronto, they will need to improve drastically and return to their previous form. 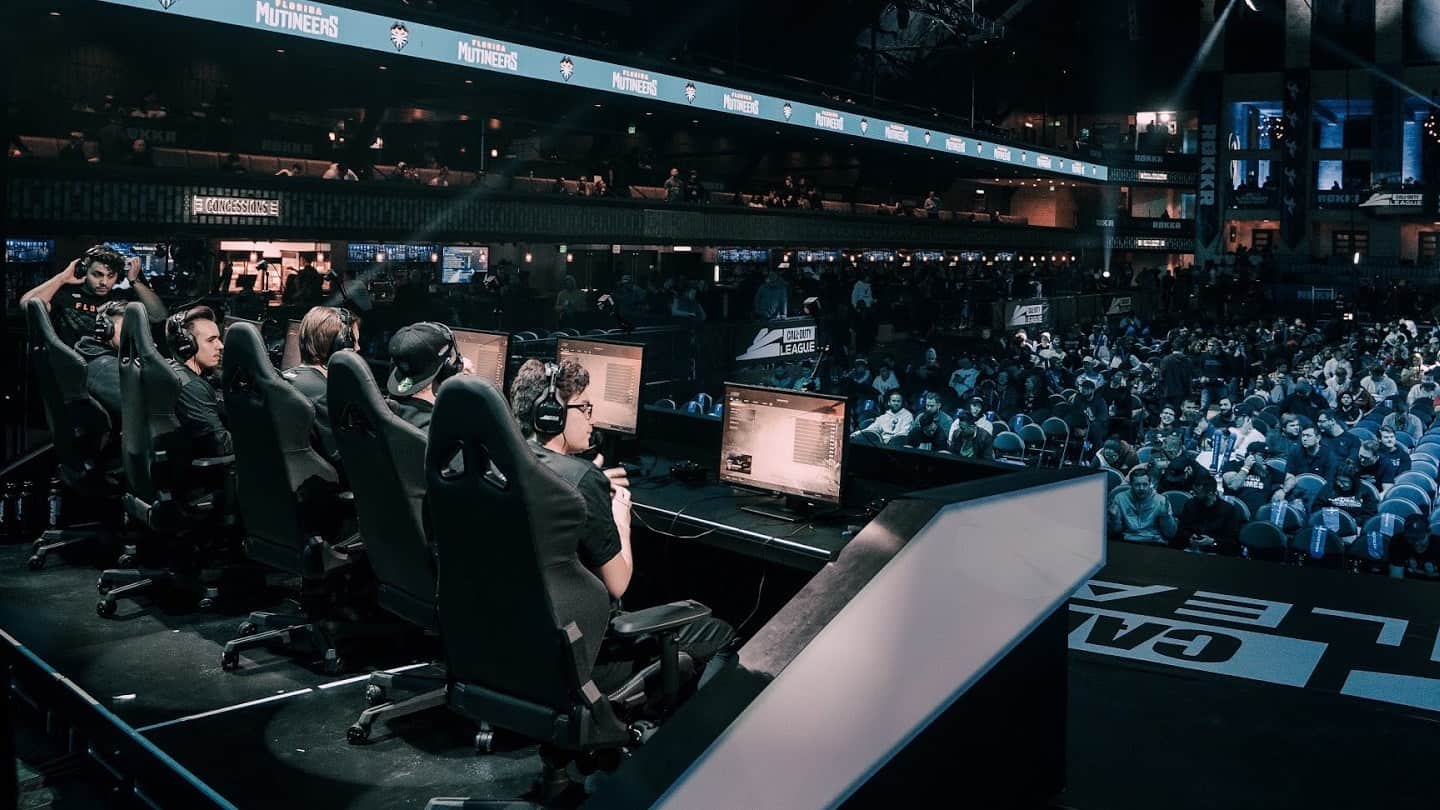 The Chicago Huntsmen stay in second after their good showing at CDL New York. While they didn't play last weekend, we could see an incredible matchup in the Finals of CDL Toronto. If all goes how recent performances say it will, we will see Dallas and Chicago match up in the Final, given their recent results, this would be an impredible matchup of two CDL titans. However, although their group looks relatively easy, there's a lot on the line. And when it comes down to the wire, teams can up their game.

Dallas Empire take the biggest leap into first place after their incredible 12-1 map count this weekend. Three 3-0 victories and one 3-1 sees them set the record for the best map record in a CDL weekend so far, with a 92.3% map win rate. Dallas were unstoppable this weekend, with every player achieving over a 1.10 overall K/D. Winning CDL London puts them in the exclusive 3-peat club with the Florida Mutineers as they head into the last Home Series of the season. Will they be the first to win four? 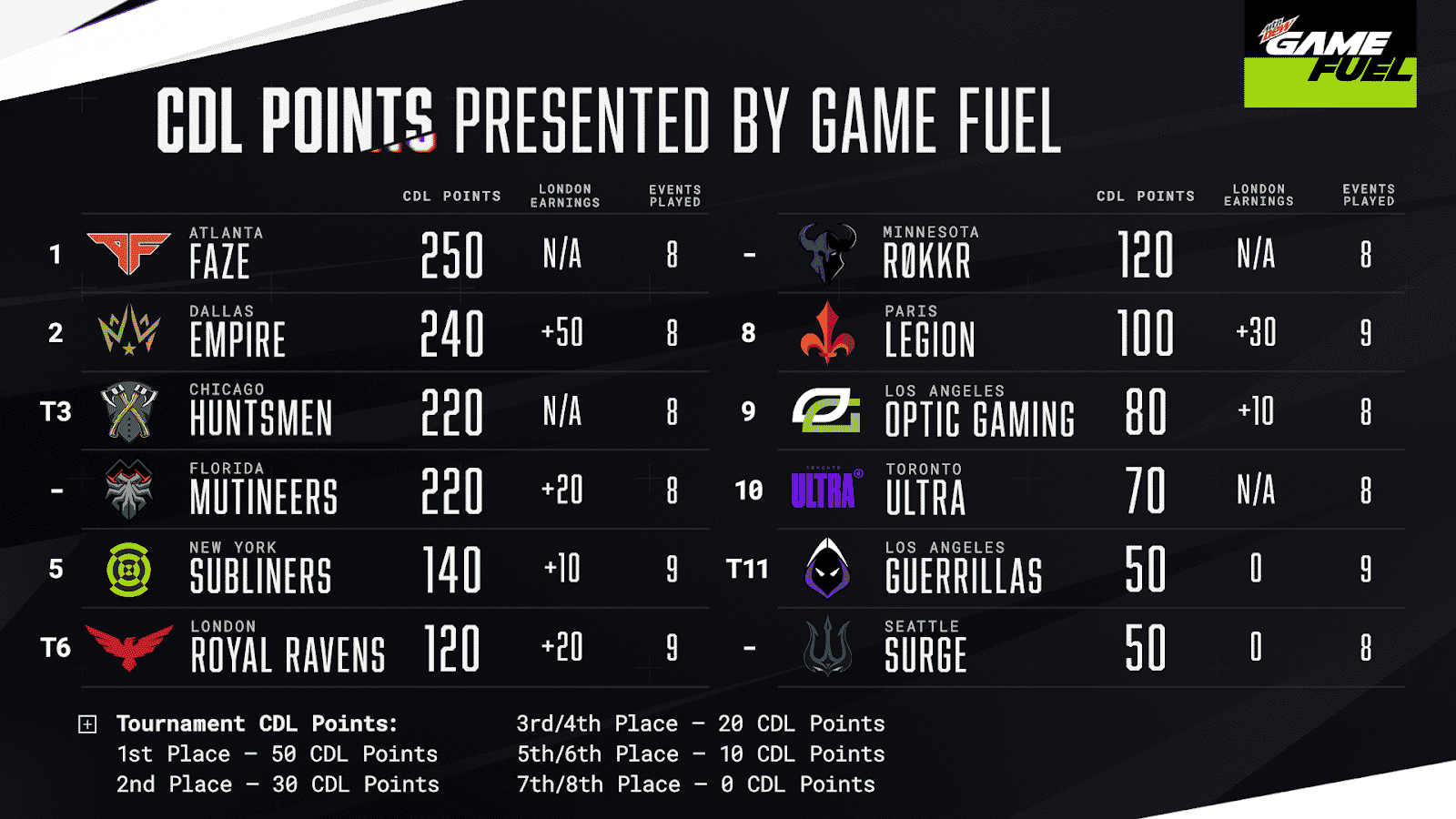