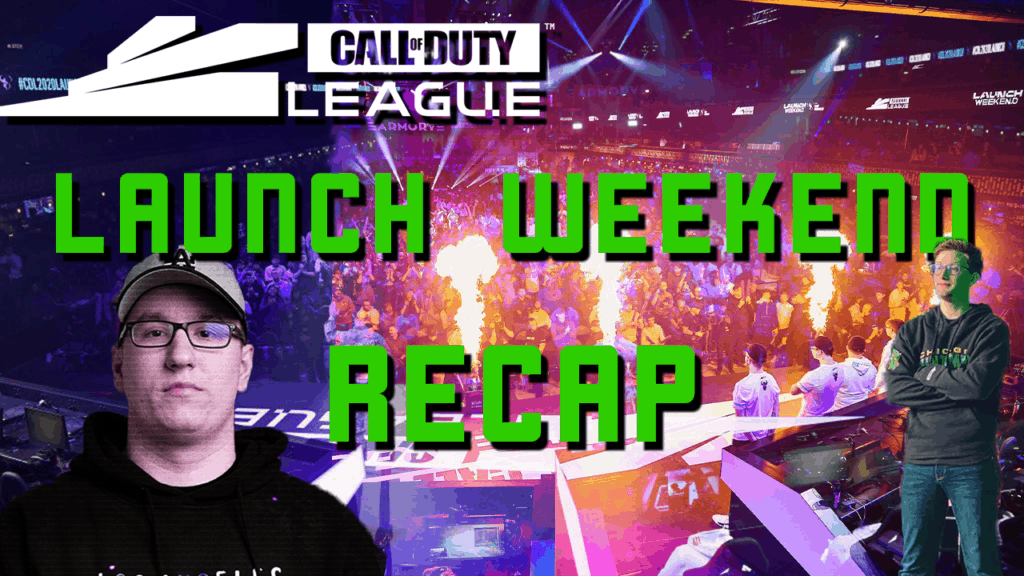 The Call of Duty League kicked off its inaugural season with an impressive display at the Armory in Minneapolis. The Call of Duty League was announced late 2019 and drew excitement from Call of Duty and esports fans alike as Activision Blizzard seeks to enhance the scene. Call of Duty League is similar to the Overwatch League as it is home to teams from all around the world. There are 12 teams in the CDL, there is the Atlanta FaZe, Chicago Huntsman, Dallas Empire, Florida Mutineers, London Royal Ravens, L.A. Guerillas, Minnesota Rokkr, New York Subliners, Optic Gaming Los Angeles, Paris Legion, Seattle Surge, and the Toronto Ultra.

Prior to CDL’s opening weekend the Atlanta FaZe, Chicago Huntsmen, and Dallas Empire were all high in the power rankings, but after the matches, it was clear that anything and everything can happen this season. Currently, the Atlanta FaZe and the Chicago Huntsman are tied for first place with an 85.7% game win rate, and the Minnesota Rokkr and the Paris Legion are tied for third with a 75% game win rate. On the other end of the rankings, the Dallas Empire is tied with the New York Subliners for the last place in the League with a 1-6 record and a 14.3% Game win rate.

In case you missed a single match or most of the weekend, we’ll do a speedrun of the matches. Opening day brought the fire and the Chicago Huntsmen made sure to put on a show in CDL’s first-ever match.

It should be no surprise to anyone as the deadly duo of Scump and FormaL laid the pressure on the Dallas Empire consistently throughout the series. They got punished for their high-speed aggressive style on Search and Destroy with the help of Shotzzy popping off on the sniper. There isn't much to say about this match due to its relatively one-sided nature to start off CDL's Launch Weekend.

The CDL’s second match of the year got heated as a back and forth between the coastal teams left many on the edge of their seat. The Surge started strong with Octane enjoying long lines of sight, with Enable backing him up on the rotations. It didn’t take Pristinni and Frosty long to get in the zone as the series went on making it increasingly difficult for the Seattle Surge to maintain momentum for an extended period of time. In the end, it came down to Search and Destroy and nerves got the better of Seattle as the Mutineers cleared out the Surge 6-0.

Oh boy, this is the juicy match that got everyone talking and brought some more controversy into the new League. Despite the Minnesota Rokkr’s dominant appearance in preseason rankings, the L.A. Guerillas looked strong against the home-town heroes of the weekend. Search and Destroy on Picadilly was a sniper fest, with GodRx and Lacefield holding angles with the veteran GodRx making a devastating impact against the opposition. The L.A. Guerillas outclassed a somewhat frantic Rokkr often playing at the same slow tempo and developing strategies as they made rotations.

I’d be remiss not to mention the whole forfeited game situation which really sounds like a bad call on the CDL’s side. Lacefield had a banned perk equipped during Search and Destroy called Hardline, and what this perk does is allow you to get your kill streak faster. The CDL has a number of banned guns, attachments and perks such as Shotguns, Deployable Shields, and Laser Attachments, but the League rules also state that killstreaks aren’t even enabled for matches. If the rounds were close, causing them to forfeit a round could maybe be seen as reasonable, but in the wake of a 6-3 map where activating a kill streak isn't possible, the League’s decision doesn’t make much sense. While many had some choice words for the integrity of the League, the L.A. Guerillas issued a statement where they state that, “

From this point on in the series after a nearly 40-minute delay and a momentum-killing decision from the referee's the L.A. Gladiators ended up falling 1-3 to the Rokkr.

The Subliners came into Hardpoint guns out and sprinting at the opposition only to lose steam and get rolled by the Royal Ravens. The London team took a 102 point lead on the initial map but didn’t start raising eyebrows until brothers Wuskins and Skrapz controlled the New York Subliners on Search and Destroy, only furthering the stereotype that teams like to skip S&D day. Unsurprisingly the Ravens continued to fly high during Domination and the map went exactly as the game mode sounds. The Royal Ravens ended the last map 216-128 taking home a solid 3-0 destruction against the New York team.

In the first weekend of CDL, the Seattle Surge have taken their games to map five, but haven’t been able to quite clinch it out. The Surge is excellent at applying pressure and forcing top teams like the Toronto Ultra to run into their heavy gunfire or take a defensive position just to stabilize. Unfortunately, the Ultra outplayed the Surge despite the series being insanely close with no more than a 50 point differential in each map.

In another five map series the Guerillas took on the Mutineers, and it was clear that they wanted it just a little bit more. Florida’s rotations on Hardpoint are phenomenal almost always taking 20-30 points from a new hardpoint opening, but their struggle to hold points and maintain consistency cost them. The bread and butter of this map were Pristinni’s flanks on the Guerillas while Skyz held up the front lines. The L.A. Guerillas were able to secure a very close victory and even played an extra map to make up for the free on they gave to the Rokkr.

Optic Gaming L.A struggled to make a significant impact against Paris Legion, only putting them in their place on Search and Destroy at Arklov Peak. Paris Legion is an aggressive team that spent a majority of the time hunting down members of Optic while making rotations as needed. Optic demonstrated a decent defense when holding a position or point, but are easily dismantled when one member goes down. Kuavo from Optic is one of their stand out members but trying to outclass Kismet left him in the negative at times.

Atlanta FaZe vs Dallas Empire was supposed to be a star-studded match up between two highly ranked teams in the preseason. Instead, FaZe put the Dallas Empire over their knee and gave them a spanking claiming an easy 3-0 in the Marquee Match of Saturday night. To be fair, the Dallas Empire gave FaZe a run for their money on the first Hardpoint match putting up 234 points before FaZe closed it out at 250. From there it was a runaway game with Search and Destroy being completely one-sided ending 6-0 but at least Shotzzy got a fancy snipe onto Simp at the end.

The battle for Europe was tense and fast-paced with plenty of back and forth to keep the audience screaming. On Hardpoint Paris maintained domination but Dylan on the side of the Royal Ravens dragged his team through the sloppy map. Search and Destroy was gripping and kept me captured the entire time. The Royal Ravens took a 4-0 lead on Search and Destroy on Arklov Peak only for Paris Legion to come back and win 6 straight rounds through sneaky plays, aggressive punishment of mistakes, and consistently adapting their playstyle. Legion won Domination in a close 191-169 claiming supremacy as the top EU CDL team and ending their weekend with a 2-0 record.

The Old versus the New didn’t pan out quite how many fans and casters thought it would. Optic Gaming Los Angeles was instantly the prey in this series as the Huntsmen did what they do best and went hunting. FormaL sniping from the stairs on Search & Destroy made for a nasty highlight reel and the opening match of Hardpoint was a beautiful exhibition of control from the Huntsmen. Map 3 on Hackney Yard was time for Optic to pick up the pace and start making some moves, and despite Kuavo’s best efforts, they couldn’t pull out the win.

FaZe ran circles around the Subliners in this series, regardless of how close the New York team got on the first Hardpoint, they were unable to take a single round on Search and Destroy and lost to a 128 point deficit on the second Hardpoint match on St. Petrograd. There is no doubt that FaZe is going to be a dominant force within the Call of Duty League, but the Subliners map win on Domination shows that FaZe can be topped if they get ahead of themselves. At the end of this match, FaZe Atlanta did not drop a single round of Search and Destroy this entire weekend.

The Rokkr were pumped up on Sunday and ran at the Toronto Ultra with everything they had, operating as a complete unit. Amidst the chaos that the Rokkr stirred up, the Toronto Ultra was able to utilize S&D’s slower playstyle to control the Rokkr and take at least one map away from the top contender. GodRx was on his usual stride popping any heads that dared to peek corners securing the Rokkr a hefty 125 point differential on Hardpoint- Azhir Cave. While some teams excel at making their rotations between points at the right time, the Minnesota Rokkr specialized in eliminating the enemy doing just that.

Feelings on the League so far

The Call of Duty League had an incredible opening weekend and brought new eyes to esports in a big way. The launch weekend was not without issues and it's our due diligence to address them. The first two days featured a rocky viewing experience with extreme time delays, persistent audio cutoffs, and weird third-person angles. The abundance of US Army ads made some audiences uncomfortable and did not go unnoticed by fans on Youtube and Twitter. The Minnesota Rokkr faced some criticism days before Launch Weekend, if you paid attention to social media leading up to the competition, you are probably familiar with the training facility debacle. Before the official matches kicked off, rumors started leaking online that the event was struggling to provide players with internet to properly practice, and videos emerged of what appeared to be an unheated garage where the event would be held. It was later confirmed that indeed the players were unable to properly practice due to internet issues, but the videos actually showed the training area set up for the players before and between matches.

Round 2 Ready to Go

Week 2 of the Call of Duty League starts on February 8th and is being hosted by the London Royal Ravens on their home turf. Match one will showcase the Paris Legion versus the New York Subliners and you can expect the Legion to take away the victory with this one given the Subliners performance on launch weekend. Match two will be the Dallas Empire versus the Seattle Surge and this is a match that the Empire can not lose if they want to maintain their image this season. Match three will be the Chicago Huntsmen versus the L.A. Guerillas and this is the Guerillas chance to claim redemption and climb the scoreboard. The last match of day one will be the London Royal Ravens versus the Toronto Ultra, and this will be the deciding factor for the Ravens if they want to pull ahead of the Florida Mutineers who they are currently tied with for 5th place in the official standings.