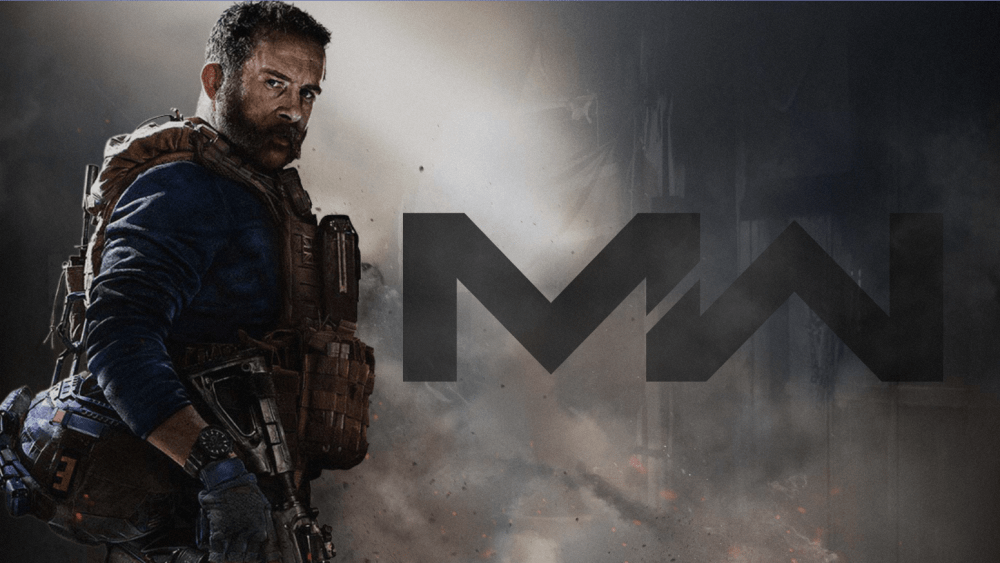 There's a lot to look at when considering what to equip for battle in Call of Duty: Modern Warfare but Activision's guide helps lead players in the right direction.

With the number of shooter fans clamoring for their next Special Ops mission to get started, they're going to need a lot more than an Operator for their loadout protection.

With the latest installment on the Modern Warfare progression path, you won’t be able to create a custom loadout until you achieve the rank of Private IV. After you collect enough experience points for the next rank, the customization floodgates open.

Activision has put together “steps” for new Modern Warfare players on their latest blog entry... right down to crafting a weapon in Gunsmith.

Weapons Menu: Sitting on the Bench

“While in the main Multiplayer or Special Ops menu, tab one menu over to access the Weapons menu. Here, you can customize your Killstreaks, choose a Field Upgrade, select a Watch…

And, at the very top of the menu, edit your Loadouts.”

Clicking this will bring you to the gun bench, where you will see a photorealistic selection of your chosen hardware and your entire loadout. As you customize your selected loadout, the gun bench visual will update to match your selections.

Loadouts in Modern Warfare are designed to allow any player, with any playstyle, a wealth of gameplay options. To begin with, there are a number of custom loadouts, which you can tailor to the type of gunplay you’re hankering after. Perhaps you want a sniper’s loadout? Or a close-quarter combat specialist? Or something in-between?

The loadout system is here to provide quick, easy-to-understand and easy to navigate menus to get you topside and into the action almost immediately. Or after a lengthy tinkering with the Gunsmith mode: It’s all about your preference. 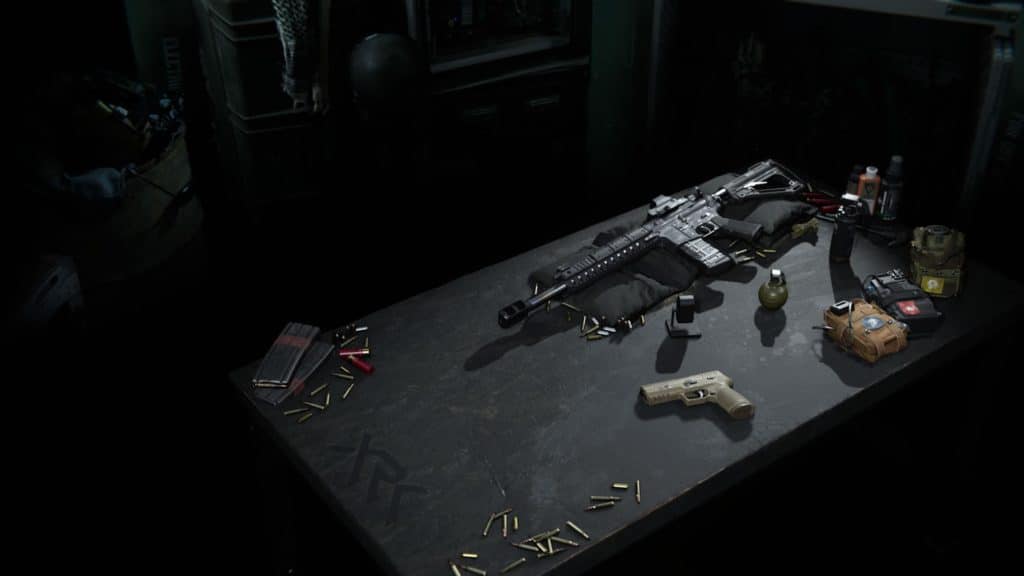 Loadouts are comprised of a primary weapon, secondary weapon and perks.

Your main source of dealing damage. Primary weapons include;

This usually serves as a back-up and typically has a different purpose. A secondary weapon could be…

Want to see an example of a tailored loadout? Pay attention to the default loadouts when spawning into a Multiplayer or Special Ops game. They are the guideposts that Infinity Ward has included as potential inspiration for what your loadouts could be!

Represented by satchels with sewn-on patches on the gun bench, these are a wide range of benefits your Operator receives in-game. Perks are broken down into three categories, and only one perk can be chosen per category:

A Special Note on Specialist Streaks

"We interrupt your loadout guide to provide this tip: Specialist streaks are back!

Within the perk section of the loadout screen, you can press a button and activate Specialist mode for that specific loadout. This makes you ineligible to earn Killstreaks… But in exchange, it gives your Operator an additional perk of your selection at 2, 4, and 6 kills without dying.

The Specialist route is recommended for those who’d rather make their Operator more powerful by direct means rather than through Killstreaks." 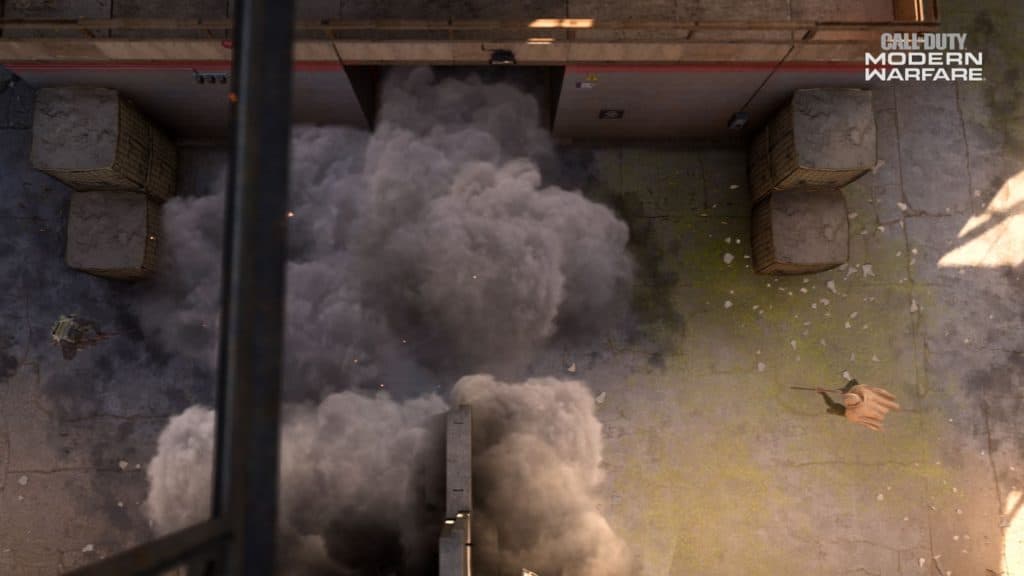 Lethal Equipment:  These items are designed to maximize harm to your enemies. In this menu, you’re treated to a tutorial. So you can quickly learn the basics of taking down foes with Frag Grenades or other explosives. Note that some lethal equipment — like the Proximity Mine — may be specially designed to take out vehicles as well as infantry.

Tactical Equipment: A compliment to lethal equipment, these items are often used to confuse or stagger the enemy or offer a unique benefit on the battlefield. Tactical equipment ranges from the Flash Grenade; which blinds and deafens targets, to the Stim; a military stimulant that offers an instant heal and refreshes tactical sprint.

We’ll go in-depth into every part of your loadout in future articles, but for now, let’s cover the Gunsmith portion of Loadouts: 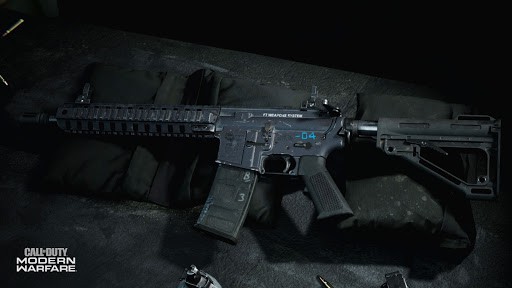 After selecting any primary or secondary weapon (except for launchers, which have no attachments) for a loadout, you can access the Gunsmith menu. Here, you'll be presented with a wealth of options to craft your assault rifle from its base version to a fully outfitted and customized weapon.

Within the main Gunsmith screen (attachments), you will see:

Equipped: This indicates how many of the five augmentations you’ve added. You can elect to attach less than five attachments or none at all. It’s up to you.

Attachments: Using an assault rifle as an example, there are eight different areas on the weapon you can augment: The muzzle, lasers, optic, stock, rear grip, magazine, underbarrel, and barrel. In addition, you can add a perk, which doesn’t affect the look of the weapon. Instead it offers a single additional effect, usually bestowed upon the Operator.

As you play with a given weapon, it will level up and gain more attachment options to choose from in Gunsmith. It’s also good to know the attachments available differ by weapon.

Weapon Stats: A bar chart displays six stats that are essential to evaluate when choosing your weapon. These stats are accuracy, damage, range, fire rate, mobility, and control. Look for a future blog post to dive more deeply into these statistics, and what they mean to weapon performance.

Preview: You can also rotate, zoom and pan around the weapon you’re customizing in Gunsmith to make sure you’re happy with the overall look.

Customize: One tab over from the main Gunsmith menu is the Customization options. Here, you can choose to outfit your weapon with any camo, custom reticle, charm, and stickers that you’ve unlocked. 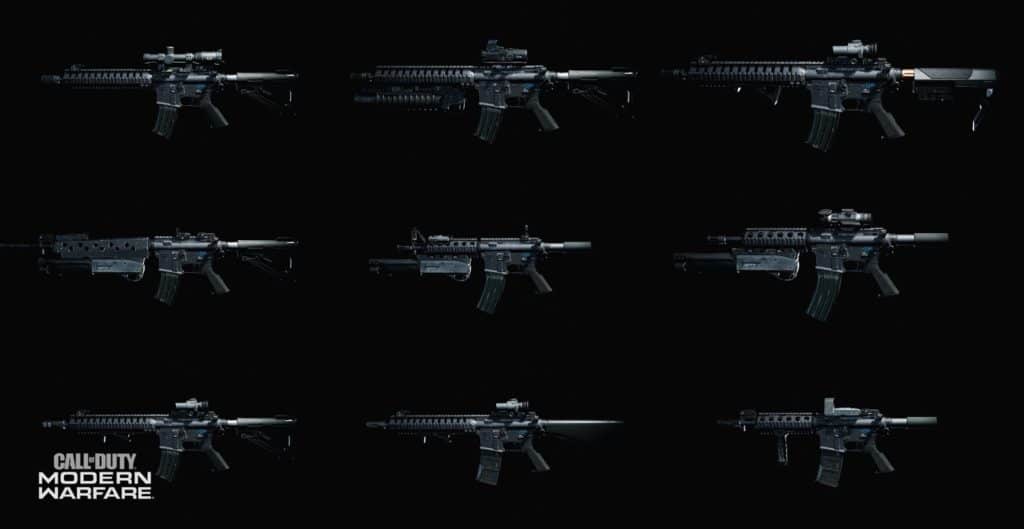 Take weapon augmentation one step further and inspect individual attachments. Click on the name of an attachment zooms in to that area of the weapon. From there, you can run through the available attachments you can equip to that location.

We picked the Merc Scout optic and attached it to an assault rifle. This gave us a precision reticle with a 3x magnification for use in all light conditions. It also gave improved aiming sight picture (pro). But at the expense of slower ADS speed (con).

A quick look at the weapon’s new stats indicated an increase in accuracy and range, to the detriment of control. Optics is only one area. But it’s the way all the attachments combine that determine the overall weapon capabilities. Gunsmith provides a deep and entertaining learning curve. Once mastered it can make a difference in how you approach matches and maybe even help you win gunfights. If you want to upgrade your weapon in a way that really gets into the details, you can really go to town in Gunsmith. Just remember, there are seven areas of the weapon to inspect and utilize!

"A special mention must also be made of weapon perks. Instead of a fifth attachment, you can elect to equip a perk instead. In the example of the assault rifle, you can select the FMJ perk for the weapon (which increases bullet penetration and damage against equipment and Killstreaks), or the Presence of Mind Perk for the Operator (allowing them to hold their breath indefinitely which adds to your focus when attempting ranged takedowns)."

"Finished kitting out your weapon in Gunsmith and want to save it for later? Save it as a Weapon Mod, then have at it experimenting with different customization options for that specific weapon."

Follow the on-screen command to make a new Weapon Mod out of your custom-crafted weapon. Name your creation, and hit save.

"You can view and edit Weapon Mods at the bottom of the Weapons menu, where you can also see blueprints you may have received during your Modern Warfare experience"

After creating your first custom loadout, you’re ready to play your next Special Ops or Multiplayer mission. If you want to edit your custom loadout while in a game, there is no need to back out; pausing the game will take you to a more streamlined Loadouts editing screen. Allowing you to adjust your loadout to better fit the task at hand.

"Have fun testing out all the options available in Gunsmith to craft the perfect loadout for your Multiplayer and Special Ops needs. See you online."