A Memorable Past And A Hopeful Future: An Interview With Dignitas’ Zaqueri “Aphromoo” Black 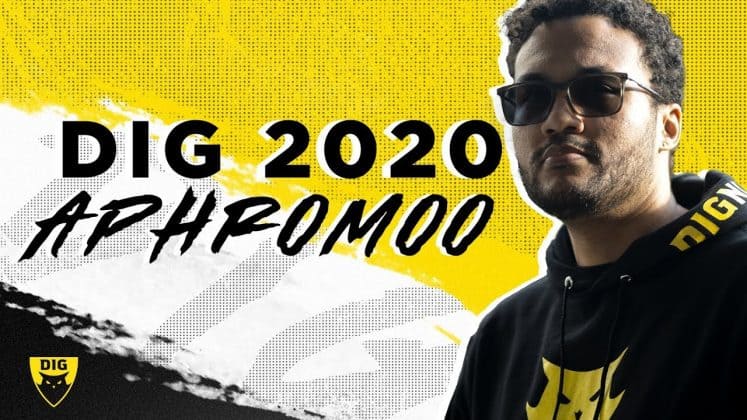 ESTNN caught up with Zaqueri “Aphromoo” Black a few days before the LCS Summer Split.

Now on your 10th competitive League of Legends team, and your 3rd LCS team (not counting Curse 6 days), at 27 you are one of the oldest North American players still active. What truly drives you to keep competing?

“I love competing. It doesn't really matter what game it is, right now it's League of Legends. All I really wanna do is just win. I enjoy playing the supportive role and whatever the team needs me to play day in and day out. It's just super fun playing with a group of guys that are all competing for the same thing. I couldn't ask for more.

I am the oldest player but like, I do think with video games, when you get older it doesn't really mean you get slower. But I do think you just get more patient. You get to a point where you aren't always going for the super-risky, hype play where you have to use your hands to win the game right there. It’s more like you focus on setup, proper positioning, and you know putting the enemy in a bad spot so you can win.”

You were picked by website Esports Heaven as one of the most Influential North American Esports players of the decade. What moment in your career made you feel like you accomplished something great and would make you remembered?

“Maybe I guess my MSI stint, where I was playing all the supports in the game! It didn't really matter what I picked then I could just make it work.”

You role swapped before role swapping was cool. Well before Uma JAN,  even if just for a brief time you played AD Carry at the very beginning of your career. While playing support now for the vast majority of your career, you have been paired with such a wide range of marksmen players. What do you feel the best attribute is in an AD Carry that makes your life easy as a support?

“My AD Carry has gotta have hands bro. That's it, that's all I care about man. *laughs*

Understand your champion in and out and be able to play every situation to the best of your ability and that's it. You don't have hands man? I'm done.”

Your ADC Johnsun had some very bright moments in 2019. What do you believe is his biggest strength? What about his game could be improved that would make the biggest positive change for himself and the team?

“He's pretty patient. When he dies he's super upset. After he dies he plays like 10 times more… patient? I don't want to say better cause that's the wrong word to use but definitely a lot more effort, he gets super pissed when he dies. It's just unacceptable for him and I love that about him. And what do I think he can improve on? I think he just needs more experience for sure. Our macro last split for our team? Well, we did win the first four games of the split but then we were all over the place after that. So [our macro] wasn't really all that sound yet.

But I think coming into this split, since we've had our tryouts, we don't really know who's going to be on the roster. With all this practice we've had, and we've been practicing for about two weeks, both teams have been playing a lot better. Whoever is going to be playing in Academy or LCS, the tryouts have been super competitive and healthy. So I think [Johnsun] getting experience and being able to play with a team that's on the same page is what's most important for the team is going to do a lot for him.”

So with holding your tryouts, you guys haven't decided whether Dardoch or Akkadian will take on the starting jungle position? Is that something you can speak to?

“I don't really choose, but we are actually still in tryouts so I have no idea.”

On the topic of new DIG players, What are your thoughts on JayJ joining the team? He seemed to have a pretty promising rookie split back in 2018 , then we kind of missed him for a while. Do you see things in him that are indicative of a future top tier support?

I have only played against him a couple of times. I played against Olleh for a while but then he left. But for JayJ he's only been with the team a couple of days now. He's been playing with our new Academy AD Carry Asta for about three days now. They were not doing too bad! I watched some of their games and played against them for about a day and a half. JayJ is consistent. He had his stint in LCS, but what's most important is for him to be on a team where he feels comfortable and can let out his style. I think that's important for every support. If you move around a lot it's hard to find that stability. So I'm happy he's found a home and I hope this is the one for him.

How has the online format for the LCS changed your perspective on the league? Has it had any specific ramifications for the team?

I don't think it's really done anything for me. It's pretty nostalgic because I've been here since the beginning. This was back when you had to qualify online, some tournaments were even online like the TSM Invitational and stuff like that. I'm used to playing in these environments so it's pretty fun. It's definitely not as much pressure as playing in person in front of a crowd. At the studio, you have to dress in uniform and go through makeup. Whereas playing online you literally wear whatever the hell you want 'cause no one is looking at you. It's nostalgic for me, maybe for the new players, it's a bit weird.  Last year we had half and half with spring in person and summer online. Coming into this year full online, I think everyone is going to be a lot more competitive for sure.