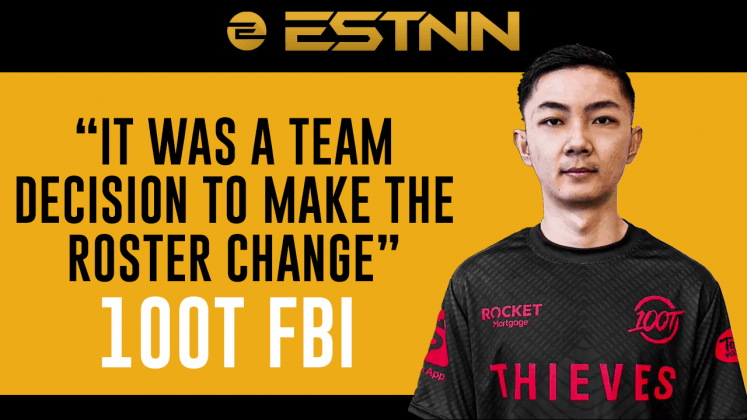 100 Thieves FBI talks about community anger towards ry0ma, his aspirations and how he believes All-Pro should have gone.

100 Thieves have set themselves up with a fourth-place finish and are looking to prove that they can be in contention for the championship following a 3-0 victory over Dignitas. Fans are still hesitant about what this 100 Thieves roster can do with the inclusion of Tommy “ry0ma” Le. ESTNN had the chance to sit down with Victor “FBI” Huang, following the team’s victory.

Also read: 100 Thieves PapaSmithy Hopes Fans Can Trust the Process and Gives a Look Behind the Scenes in Exclusive Interview

Thoughts on the series

Today we’re joined by the victorious AD Carry of 100 Thieves, FBI! FBI, how are you today?

I’m good man. It was pretty good to get the win and it's a big sigh of relief.

Of course! I wanted to get started with how 100 Thieves had a difficult game, to say the least, last time around [against Cloud9]. How was this week for preparation? What did you guys try to iron out?

I think, honestly, against C9 we kind of drafted or had to play in a way where we had to anticipate how they were going to play. But they ended up not playing what we thought they were going to play at all. And that was a really big mistake because I felt like we were lost in that game in terms of draft. I think for this week, we tried to really focus on ourselves, what we want to play and don’t worry too much about what DIG was going to pick, and it worked out a lot better for us.

You were the only team that has gone 3-0 either way so far. But it did feel like you were in control [of Dignitas] throughout the series. Is that how you guys felt? Were there moments in games where you didn’t feel that way?

I would say the first game was a bit shaky. I think Neo played really well on the Kalista and Aphromoo on the Thresh. In that game, it was pretty hard for us to play in bot and they played it pretty well. So I’d say that game felt shaky but Ssumday came up really big and kind of 1v9’d that game for us. After that, I felt like games two and three smooth sailing.

How’s the team atmosphere? We know the narratives of people saying 100 Thieves is changing everything, but how have you been feeling with the changes and how’s the team feeling?

Well, it was a team decision to make the roster change for mid. And I think it's been working really well. Ryoma has been improving and playing a lot better. I feel like the community is a bit harsh on Ryoma and he gets a lot of undeserved criticism just because we decided to make that roster change. I think it’s pretty unfair, he played well and has really improved so I hope the community, I don’t know, chills out a bit because it feels bad to see my teammate getting flamed.

Right, like you said, it's not like he’s completely underperforming. Sure maybe against Cloud9 you don’t have the best of showings… but it's good to hear it's a team decision. But I wanted to shift focus to All-Pro voting. You’ve had a stand-out year… have you been feeling like you’re really becoming one of the best, if not the best, bot laner in North America?

I would say, honestly, I underperformed in quite a lot of games this split. I don’t really feel happy about the way I played in the regular split and especially in the series versus C9. So I think I still have a lot to improve on. It obviously does feel good getting votes for All-Pro but I really don’t feel like I deserved it this split because I made a lot of mistakes. I’m hoping I can show better performances next split and the rest of Playoffs.

Right, well you might feel that way and the team or other people might see it differently. One role that you have played with that was heavily contested is support, so how do you feel about Huhi? Do you feel like maybe he was snubbed or has the competition been stacked?

I definitely feel like Huhi was snubbed. If you’re going to put me in the All-Pro, honestly, Huhi deserves it for sure. As an AD Carry, if I’m being completely honest, our game is really easy to play. Everything is set up by support and jungle and the team’s macro. Playing team fights as ADC is pretty simple, I would say. I made a lot of stupid mistakes in team fights and I shouldn’t do that but a lot of credit has to go to Huhi. I do think he should’ve got at least third All-Pro.

I want to go back a little bit. 100 Thieves started the season very strongly, Lock-in was very strong for you guys. What do you think were the issues that fans maybe perceived as a slump that made you slide from potential champions to lower in the table?

I’d say we did start off very strong and I’ll also agree with the fact that all of us were slumping pretty hard.  Especially towards the middle of the split. I feel like, as a team, we lost a lot of confidence based on the way we were performing and that’s just like a downward spiral I’d say. But recently we’ve been able to find our footing again. Hopefully, we can make that climb back up there. For the fans, it's reasonable to be disappointed, we’re all disappointed because we did slump really hard and we kind of lost our team identity. But we’re working really hard to bring that back and hopefully win the split.

Your next opponent is TSM, you had a post-game interview on the LCS [broadcast} already, but what do you think about playing against TSM? We did see them struggle a bit before but how is the team feeling going into the match?

I think TSM is a solid team. They have good laners, a good jungler and they’re just all around really good. And then, they’re coached by Bjergsen, who's obviously going to be a pretty good coach. I’m not underestimating them at all but we’re going in very confident. I think that we can abuse their bot lane and hopefully I can show that. But TSM is definitely a really solid team and we’ll have to be on our A-game to win.

It's interesting hearing you say that because you guys, especially in the bot lane and Closer, really had their number last season. You did end up slipping up in that last best-of-five series but do you, by the time summer comes around, think you have what it takes to overcome TSM and be considered in the top three representatives for Worlds?

Yeah, definitely. We made the roster swap pretty lane in the season so I don’t think we’ve really had our time to truly come together. We’re making a lot of progress but we’re not there yet. And I think this summer, we’ll definitely be a top-three team. And yeah, probably take down TSM, and hopefully C9 and TL also.

Stale meta and words to fans

We’ve heard a lot of people say jungle has been a stale role in the meta. How do you feel about the AD Carry pool and ADC meta?

Personally, I think the meta has also been kind of stale. Like, Kai’sa has been a staple in the meta for a bit too long now. I don’t think we should nerf Kai’sa, just buff others and give us some more agency in the game. But I don’t mind honestly. The meta has been stale for AD Carry but it still feels pretty fun and enjoyable for me. So I’m not complaining.

To finish off, do you have any last words for 100 Thieves fans out there that have been following you and maybe have been a little bit frustrated going into Playoffs?

For sure. I think, for the fans, it's completely understandable to be frustrated with us. We’re the most frustrated with ourselves and honestly we’re working really hard. I feel like we’ve been making a lot of improvements, so next week against TSM, I hope we can show you guys the victory screen!

*Chuckles* If you want a bold prediction, then 3-0!

You can watch 100 Thieves take to the Rift against TSM on Sunday, April 4. For everything else LCS, stay tuned to ESTNN!