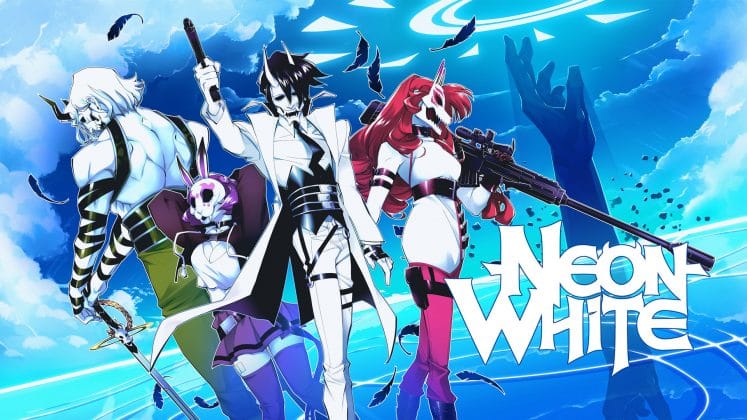 I spent the better part of two weeks plowing through Neon White. The fact that I got all the achievements and hunted some world records should give you a good idea of what I think about it.

You'll probably look at Neon White and think what the hell it actually is. And… I struggle to describe it without sounding like a lunatic. Depending on what material of it you look at, you'd think it's Doom but with a card game attached to it. A Machine Girl double album with a lengthy interactive music video. Or Persona in heaven but with guns. And it somehow manages to be all of the above and none of them. So it's very hard to convey even by looking at it what playing Neon White is like.

But I will attempt it nonetheless. If you are into replaying the same levels over and over and over again until you know them inside out, then this is probably a game for you. A speed-running FPS, that is what Angel Matrix tried to sum it up as. And, yea? Something like that. But that's also selling the title short. The game is mechanically flawless. And that goes hand in hand with the level design. And all of that is wrapped up with a love letter to early 2000s anime tropes. Something you'll definitely have to appreciate to some degree from the get-go. But at the same time, it never feels like it gets in the way.

I've seen colleagues bemoan how some of the more lengthy conversations, get in the way of the gameplay. And perhaps that's just on me because, for me, they felt like nice breaks in-between sections of the game. Because I tried to go for 100% completion from pretty much the start. So those cheesy characters offered a breather from obsessively trying to shave down seconds for an hour.

Even then, the story of Neon White isn't a bad one, either. It's corny, a little grim but in the same vein, it comes with a wink and a nudge. It has no aspiration to be some deep deconstruction of tropes, even if all its moving parts are certainly being implemented with more care than it first leads on.

You are Neon White, an assassin that ended up in hell. Probably because of the whole thing that is implied with being an assassin but we're not judging here. Heaven is holding a competition since they have to deal with demons from time to time, so why not put the souls of the damned to work? The problem is, White has lost his memories. And is thrown into the competition with some of his old running mates. So as you rise through the ranks, you'll slowly uncover what lead to all of them hunting demons in heaven. And while the story does not exactly go for curveballs, all the characters are charming enough to unlock their optional dialog.

You do that by finding gifts within levels on replays. Early ones are quite easy to find and just require making some more difficult jumps. The latter ones change things up, those expect you to make use of all the resources available within a level. Resources you ask? Yea, I should probably explain that.

MORE FROM ESTNN
Thymesia Reviews, The Devil May Cry of Soulslike

In Neon White, your arsenal consists of cards that take the shape of guns. They are the usual affair of handguns, shotguns, submachine guns and so on. Your shooting is of course limited by ammunition, but you can also choose to discard a weapon for a movement ability. Be it a forward dash, a double jump, or a ground pound. Levels are designed so that you have to pick up and discard weapons while dispersing enemies. The faster you kill everything and reach the goal, the better. And Neon White can't get enough praise for its level design.

If you look at screenshots, you might get the impression that Neon White is a Sega game for the Dreamcast. With the blue skies, endless waters and use of bloom. Honestly, it's probably only missing a fishing minigame to pass as one. But the white, clean walls of heaven might look boring at first. But that's a plus! Rarely have I seen a game with such clear design elements. Clutter on the ground? You should probably jump or use an ability here. An opening in the wall, clearly sticking out of the architecture, that teases a hidden route? As soon as I started noticing this, I couldn't stop being amazed by it.

Levels themselves are short, most of them take under a minute to clear once you get their pathing. You'll rarely get lost in them, either. Everything is very readable without spoiling the fun of exploring your options. And can we just continue to praise how tight this level design actually is? Not only are entire levels focused on just one particular mechanic of movement, each one of them stands as its own challenge. Some of you might remember the ‘think with Portals' meme from back in the 2010s. Neon White makes you think with gun cards. And you can always shave down seconds and optimize your pathing.

That being said, getting the Ace times isn't particularly hard. At best, it'll take a few attempts and some experimenting to get it down. And it is that effortlessness that makes it so fun to begin with. Little bursts of tense experimenting, exploding into relief over a job well done. Now, if you're feeling competitive, you can go after chasing the developer's times or go after a world record on the global leader board. And, yea. I totally did not spend half a day on one level, trying to shave it down by two seconds. Only to have my world record ripped away from me not long after. I'm not mad, I did my best here.

What I also want to praise is how the scaling is done. Early levels are simplistic and offer a lot of room for experimenting and learning the ropes. In later sections, you're suddenly performing tight movements, skill shots and quick ability combos. Without a second thought. And that's something I don't see mentioned nearly enough in the discourse about this game. It's perfect at teaching the player, without getting in the way. All that by just some outstanding level design and subtle visual cues.

So what do we make of a title, that's accessible to play. Has a high skill ceiling and excellent level design? Well, Neon White is probably one of the best games I've played this year. Even if some people are turned off by the ‘anime aesthetic' and its edgy undertones. They're fine. You should probably stop trying to look too hard into things. And just accept a fun thing as a fun thing. And it's not like the dialogue is badly written either. All the characters have been developed with enough care to make them charming in their own way. Which is something that'll really shine once you do their optional side missions and unlock memories related to them. The only thing I actually have to complain about Neon White, is that there is not enough of it. And I'd like to be able to turn in all my collected gifts at once. The former one can be fixed by either making another level pack. Or could you imagine the title getting a level editor? Something similar to Mario Maker, Maybe Angel Matrix please? Not everything needs to be an unending live service game. But I can see Neon White developing a healthy community of dedicated players. Close to something like a Trials. I want this! Please give it to me.

Final thoughts! Neon White is a stark reminder that in the mud of copies that only want to focus on sticking to the genre formula. You can still mix and match genres and see what you get out of it. I never expected that an elaboration on Counter-Strike slide maps, paired with powerups and voiced by Steve Blum would be my thing. But it is my thing and I would like to see more of it. And I'm very happy to announce that with this recent wave of Indie titles, I can proudly confirm that video games are still allowed to be fun.

What'll eventually hold back Neon White to reach the audience it damn well deserves, is that it doesn't have the story of a father taking care of his child. I mean, technically it's there if you- I'm not going to spoil the plot. But give it a chance. There is a lot to love here. Especially if you like to casually challenge yourself. A game I'll probably pick up and play from time to time just for some free dopamine points. Did I mention that the game is on Switch too? And don't worry about not having the ‘required reflexes'. While Neon White wants you to go fast, you always have plenty of time to react and take aim.

Now, where do we go from here? Probably blasting more of Machine Girl's soundtrack while trying to get some more world records, I hope. Desperately hoping that we'll get at least mod support for the title, so all my dreams come true. So until that, I still give Neon White a full-hearted recommendation. Titles like this deserve love and attention, and I want to see more from that team!

The game is only missing some features that would ensure longevity. Besides that, it's a very fun first-person, speed-running platformer, visual novel with a banging soundtrack. Available for both Switch and on Steam. For more eSports and gaming goodness, visit us here on ESTNN. More Video Games You Should Play Sweet Transit Early Access Preview – Getting Steamy in the City