It’s never been a better time to get into esports, whether it’s playing, watching, or even betting on games.

Esports is competitive video gaming and it’s becoming a more and more popular category of ‘sports’ to get into, especially in 2020, when the real-life sporting world has come to a halt. 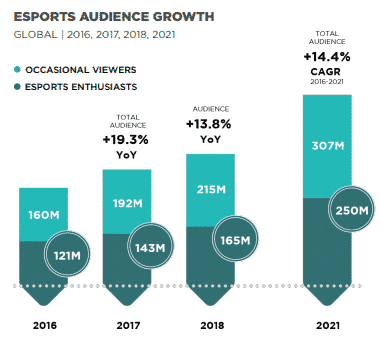 If you thought that esports was just playing a game of Fortnite online, then you’d be wrong. Esports are competitive matches or tournaments which may be one-offs or involve a number of rounds, have professional teams or individual players, and involve plenty of prize money.

Let’s take a look at some stats around esports in 2020.

If there was any figure to prove that esports was more than just video gaming, it would be this one. Esports revenues were forecast to reach $1.1 billion in 2020, according to figures from Newzoo’s market research report from 2019.

This figure is made up of sponsorship and media rights, tickets and merchandise, investment into infrastructure, and excludes any revenues from betting.

Betting on sports, any type of sports, is time-consuming and takes skill to make money, unlike quick punts on video game-themed slot machines.

Revenues of $14 billion from gambling

Esports revenues from betting are set to hit record highs in 2020, with revenues expected to double from $7 billion in 2019 to $14 billion, due in no small part to the Covid-19 crisis. This is according to the latest research from global consumer research agency 2CV and ProdegeMR released in May 2020.

Betting on esports is legal in many places around world, and for those places that don’t have their own esports betting markets, players can play through offshore websites.

If there is any indication that esports are a growing gambling industry, it’s that 30% of esports betters have taken up the hobby in the last month. This is despite spend on betting falling for people due to uncertain financial circumstances this year.

With these new betting market expansions, it’ll get more viewers who are interested in new betting opportunities and learning new games.

495 million viewers (and then some)

From Newzoo’s 2019 research they predicted that 495 million people would have eyes on esports this year – made up of 222.9 million regular viewers and 272.2 million occasional viewers. Keep in mind that this research was done before Covid-19 struck.

If you head on over to Twitch, you’ll see far more viewers in gaming channels than you would have seen online before we were all stuck at home with nothing but the internet to entertain us.

With the drop-in smartphone prices, now everyone can afford to play online games on their phones – even in emerging markets. The same report indicates growth in Southeast Asia of 24% CAGR, Japan (20.4%), and Latin America (17.9%).

Players in these regions are picking up games like PUBG Mobile and Garena Free Fire. Particularly with tourism down in these regions, it means that many people have a lot more time on their hands to gain skills quickly and head to the top of the leaderboards.

No matter which way you look at it, 2020 has changed the game forever. More people have started serious gaming as they have more time than ever to dedicate to it, plus more people are watching esports, since they’re exploring further avenues of interest after watching everything on Netflix and already Zoom chatting with every single person they know. Covid-19 has changed the world forever, but it’s also brought esports to a whole new audience who would never have discovered it before.