Death Stranding Review, a Game (Pass) For the Ages As Death Stranding hits Gamepass, it's worth going back and checking out this gem. Here's our Death Stranding Review for all of you lucky enough to be trying it for the first time.

Not many in the gaming sphere have quite a name like Hideo Kojima, a man whose name is plastered all over his work. Which led many to believe that he isn't quite the most humble man in the world. But we also have to admit that Hideo Kojima has been an innovator ever since he got his start in the industry. And there are fewer game designers who have constantly pushed the boundaries of the medium of games over their 35+ year-long career.

To put it quite frankly, Kojima is a guy who has been in the industry for ages. Despite many joking that he should go into movies and be a true visionary in spite of it, the man does not get the credit he deserves in my humble opinion. Yes, the man behind Metal Gear does not get enough credit for having carved out a career that includes several games that easily make a top 100 list of greatest games of all time.

But that's not what people saw in Death Stranding. After Hideo Kojima's departure from Konami in 2015 shortly after the release of Metal Gear Solid V which did not come without its own slew of controversy. His next venture would be Death Stranding. And after a series of cryptic trailers, many were confused and somewhat disappointed that one of the biggest names in gaming would make his independent debut with what turned out to be an expensive package delivery simulator.

And what happened to Death Stranding wasn't exactly kind. There was this narrative floating about how it was a betrayal to his loyal fans who supported him for all those years. Probably because they expected the man who felt pressured into making Metal Gear Solid games forever would make another Metal Gear Solid just under a new name. But instead, he did a complete turn and tried something new.

And if you never had exposure to Kojima's extensive catalog of games, I can't seriously blame you for being disappointed. But you paid for a Hideo Kojima Game and you did in fact get a Hideo Kojima Game. Because Kojima isn't some gaming auteur that thinks really highly of himself, instead you have someone with a really distinct artistic vision surrounded by a team that knows exactly how to process that vision into a video game.

Death Stranding was no different from his previous titles. but instead of being sold to you as a triple A blockbuster that will sneakily explore an anti-war theme, the danger of misinformation and the dangers of hero worship, Death Stranding was marketed as what it was. A lone postman played by Norman Reedus, hooked up to a baby in a yellow tank braving the post-apocalyptic united states which looks suspiciously like Iceland now. And it was beautiful.

Tomorrow is in your Hands

Now that we got the dramatic backstory out of the way, let's talk about the game. In Death Stranding, you play the role of Sam Bridges, played by the handsome Norman Reedus whose job it is to deliver packages. But instead of having to brave the weather and barking dogs, Sam has to deal with the aftermath of the Death Stranding. A cataclysmic event that caused the line between the dead and the living to blur. Forcing humans to live in underground bunkers, isolated from another as everyone only cares about their own survival.

The dramatic irony of it is, had the game released only a year later. Many more would've probably been more sympathetic to this setting. But this is not the first time Kojima and his team predicted the future. But we're getting ahead of ourselves.

Sam as a character is probably one of the more interesting aspects of this game. Played by a certified bad dude like Norman Reedus, you would expect him to be a lot more macho. And while he is gruff and rough around the edges, Sam is different from your typical video game protagonist. He suffers from aphenphosmphobia, a fear of being touched. And if you are a person that struggles to form meaningful connections with others, you'll probably find it quite relatable.

And that's the big thing with Death Stranding in general, this is not the type of big triple-A blockbuster that'll land for everyone. It doesn't want to please as big of an audience as humanly possible, unlike Kojima's previous works. Death Stranding feels like someone's really personal passion project, its writing and story are unhinged. It wears both its themes and emotions boldly on its sleeves while never being apologetic for what it is. 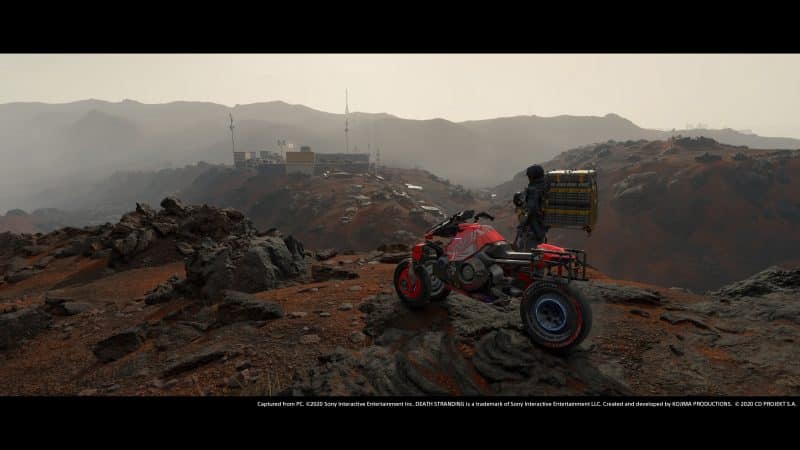 All of this is wrapped up in some of the most interesting gameplay of the past decade. You've probably heard that Death Stranding is a walking simulator, but here it is less of a demeaning term to describe a game that has a story happening at you as you hold forward and more of an accurate description. But the hiking simulator is probably the more fitting one here.

Yes, it is true, in Death Stranding, you transport packages over vast distances in a world that has collapsed when the concept of life and death was flipped on its head. So most of your time is spent braving difficult terrain, securing routes, and delivering packages in pristine condition. And this really rubbed some gamers the wrong way. There was barely any action here and if modern triple-A gameplay is loud pop music, Death Stranding's probably closer to the relaxing sounds of wind rushing over the grass of a steep hill.

So instead of having bursts of high tension, Death Stranding's gameplay loop is a gentle hum. Climbing a steep hill in this game is more than just tiling an analog stick forward. While you walk up that hill, you have to balance out the cargo on your back and make sure that you don't step on any moss-covered rocks or loose pebbles. This concept extends to every aspect of the game, every new location is a new hazard to overcome. For this you can either use your brains or tools that make life a little easier, be it ladders, vehicles, or maybe just a shelter from the rain.

It is definitely the kind of title you have to be in the right headspace for. Because if you jump into this, expecting to be wowed from the moment you load into the game you'll be severely disappointed. But like a solo hiking trip, when you're all alone by yourself in the middle of nowhere, your back aching and taking in the view.. something clicks. Despite its story being metaphysical nonsense for the most part that tries to be more complex than it is, it works in tandem with this gameplay.

Between explanations and long-winded dialog, you spend most of the time alone with Sam. Who's often as confused or even more so than the player is, instead of actively contributing from the get-go. Sam just does his job and it takes him probably as long as it takes for you to take the game's story and themes seriously. Because Death Stranding is at its core a game about connecting people.

It borrows from that unsynchronized online multiplayer aspect you'll probably know best from the messages in Dark Souls But instead, you leave your resources behind. Ladders, ropes, and even fully build roads. Those can then be used by other players and you'll get a social media like whenever someone uses them. There is no real reward for getting these likes, but it is a nice fuzzy feeling to make someone's struggle a little easier. Be it just by playing a little sign that wishes a stranger good luck or warns them of an upcoming hazard.

While Death Stranding was probably never going to be the cult hit I want it to be. The idea of making traversal its sole focus and a multiplayer component that doesn't even give you the option to be rude to people is certainly something special. And it plays into the larger thematic of trying to form connections with strangers very well. But there is more to this. 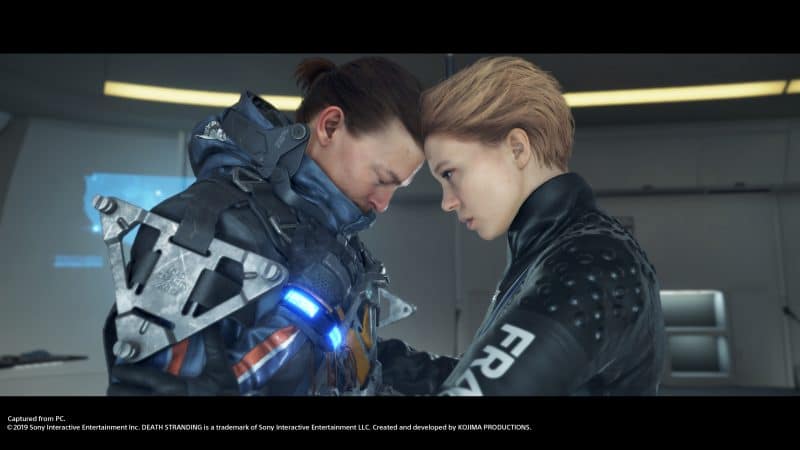 I'm not sure if I've managed to communicate the appeal of this game, because honestly, it is the kind of game that can be a weirdly personal experience if you let it. It is very apparent from the start that this is made by someone who tried to communicate himself to others in a meaningful way. And if you have experience with being human, that is really hard. Allowing yourself to be valuable and letting some transcendent experience take hold.

There is a point to this, I promise. I would say to my fellow video game enjoyers, games tend to serve as a way to either unwind or escape from reality. Or as a challenge of skill, something competitive that makes you feel good about yourself or just simple and plain entertainment. But games can be a lot more. People like to tell Kojima he should direct movies instead, yet all his games explore ideas and themes in ways a movie never could.

His games are rarely about the story being told on screen, that tackle hard-hitting social issues with the grace of rubbing action figures together but rather try to get ideas and thoughts across. Death Stranding is no different, the story it tells is as convoluted as you'd expect. But in the same breath, it is so earnest about the kind of wacky pseudo-science adventure it wants to take you on that I can not help but find it incredibly charming.

But this time around it is the actual game underneath that really shines. It is so refreshing to have a big game like this, which focuses solely on lulling you into a meditative state while you do some simple problem solving with every step. And it makes me yearn for more of this kind of game. Something that we definitely see in the independent corners of the industry. But rarely on a mass-marketed console blockbuster like this.

If you've never touched this game and I hope by now you're at least somewhat intrigued by my nonsense rambling about it. I ask you in earnest to give it try. Especially now that it is on Gamepass. Because I don't think Death Stranding was ever at fault for what it was, it was the internet hype machine that created this disappointment it was perceived as. And it deserves much better, it deserves to be a fondly remembered and beloved title like most of Kojima's works. And while you may disagree if it's any good or not, it is good that games like it exist.

Because without weird games that are unapologetically themselves, don't cut any corners on their vision and most importantly; don't try to chase an audience for guaranteed success. We'll eventually find ourselves at an innovative standstill. When the same franchise with the same formula is being remade over and over and over again. When the vision for games dies in order to please a bunch of suits who don't even care about the medium.

So, that's enough ranting for today. Go play Death Stranding when it comes to Gamepass. Apparently, the version that's coming to Gamepass is the original PC release and not the recently released Director's Cut but that's left to be seen once it's actually out.

For more reviews like our Death Stranding Review, make sure to check out our reviews section. Review: Honey, I Joined a Cult