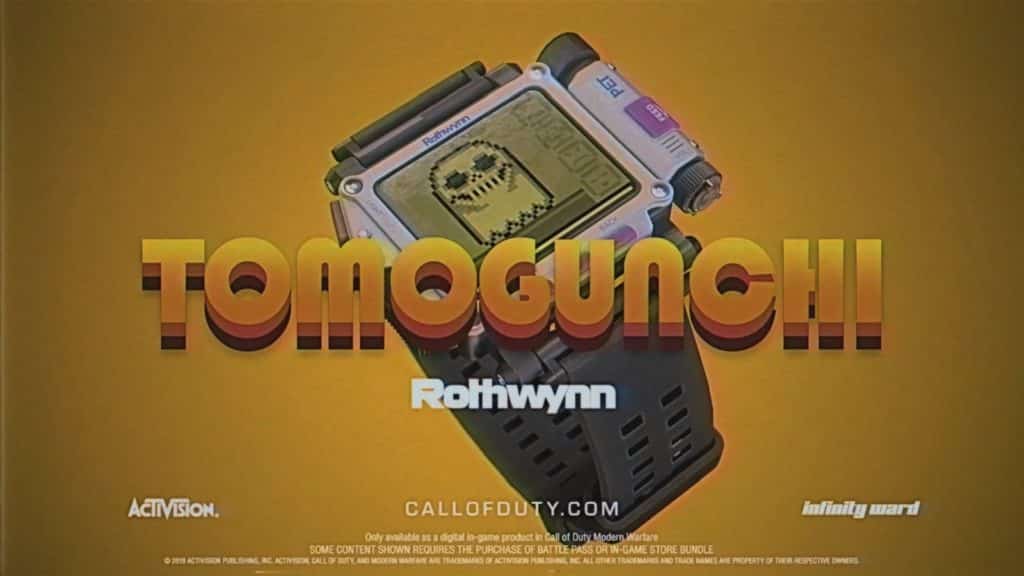 Time to take a break from the carnage for a little friend.

Players of Activision’s Call of Duty: Modern Warfare are getting perhaps the most tonally jarring cosmetic option in the history of shooting games with the introduction of the “Tomogunchi,” a parody of the iconic Japanese digital pet watches launched back in 1996.

Introducing the Tomogunchi: a virtual pet for your Operator!

1️⃣ Feed it!
2️⃣ Monitor its moods!
3️⃣ And help it evolve!

Get yours from the in-game store today in #ModernWarfare pic.twitter.com/3CLEhEXIqS

Similar to Bandai’s original Tamagotchi, one of the biggest toys of the late eighties and throughout the nineties, these new in-game wristwatches contain a virtual pet that hatches from an egg — the screenshots show a cat, a panda, and what looks like a dragon. You then have to take care of the creature, or else it may end up perishing due to neglect. You can feed it, keep tabs on its emotional state, and even help it grow and eventually evolve.

The dark comedy here is that all of this has to be done not on a physical product, but on a virtual version of a physical product accessible only in between shooting your various virtual brethren in the face during a standard Call of Duty match. You literally use the d-pad of your controller to check the in-game wristwatch while you’re running around a map.

Check out the faux press release that Activision put out this week on their latest blog post, detailing how the Tomogunchi’s capabilities (as well as their company branding):

"The following is a paid advertisement for Rothwynn Industries.

Hello from the 21st Century.

An interweaving of style, plastics, and cutting-edge button-related technology.

Make no mistake; this is Rothwynn precision-engineering at its finest. Want a time-piece* your fellow Tier One Operators will be watching out for?

Rothwynn Industries is proud to introduce Tomogunchi. This is more than a mere watch: This is a nesting device that houses the most realistic artificial intelligence ever witnessed in a Rothwynn Industries wrist-based product. Utilizing the latest advancements in pixel-based monochromatic liquid crystal display technology, your Tomogunchi’s “home” is a durable watch, machine-crafted from the finest non-biodegradable plastic designed to provide you with the most immersive pet-based, combat-related experience ever seen.

Do YOU have the nurturing aptitude to keep your Tomogunchi alive? Will your new friendly creature become well-fed and thrive? Or will it freak out and eventually die due to inattention?

So if you’re familiar with Ridley Scott’s Prometheus or even the early alien films, you’ll pick up on the Weyland Industries parody that Activision is testing out here. Maybe these Tomogunchi products will have a bigger spot to fill in the next Call of Duty game.

The fake press release details their friendly little killing machine even further, check it out:

"Meet Tomogunchi: your new freshly hatched friend who’s the most fun to be with! Strapped to your wrist and craving almost constant attention, your very own Tomogunchi is ready to become your favorite cyber-pet in any combat zone!

Head to the Modern Warfare® Store today and purchase the Tomogunchi Bundle. Then, during your loadout selection, go to the Weapons tab, locate the Watch Select menu, and equip your new pal: The only way to feed and evolve your virtual pet is to equip it on your wrist, so put it on before you play!

In a moment, once you take to the combat zone, you’ll soon spot your critter struggling to crack open from its initial Egg form.

Over time, your egg explodes, and out of it appears the adorable Baby Tomogunchi! Assuming you can keep it alive over a period of time, the Baby grows into a Child, a Teen, and then into a full Adult. Are there multiple pet forms and options to discover? We aren’t saying. Which type of pet will YOU get to take care of?"

So what happens now

As if it weren’t retro enough, your “pet” will eventually grow and help you engage in battle the more and more you, uhhh, battle.

For a franchise that has strayed away from the former insanity of what it once was (from in-game Doritos promos to Kevin Spacey monologuing as the President of the United States) it truly is refreshing to see this Tomogunchi take off. Sure it is a war game, but humor has always been a staple of the Call of Duty franchise. And, with Soap coming back alongside rumors of Warzone on the rise, Activision/Blizzard might just finally be finding their footing while treading lightly in their nostalgia.