Players can compete against the pros in this new Warzone Rebirth Island playlist in the COD League Rebirth Resurgence Tournament.

Call of Duty: Warzone has been without a proper in-game ranked system since launch. And this has been the main priority for many fans and players. Constantly asking for Warzone to introduce a ranked mode. While this isn't quite ranked, the COD League Rebirth Resurgence Tournament allows players to earn points, and compete against the CDL pros in the future.

The open competition kicks off with the Call of Duty League: Resurgence Quads playlist in Call of Duty: Warzone. This public playlist will go live on April 5th and 6th from 3pm-6pm PST each day. Be sure to register your team on GameBattles before the deadline of April 7th at 3pm PST in order to be considered for qualification into the next stages of the CDLR.

Competitors will drop in and rack up as many points as possible based on the scoring system above. Players will be scored based on their 10 best performances during the open playlist. Team scores will consist of the total of their 4 players’ scores. The top 40 teams will move to the Qualification Stage. Competitors may play with whomever they want during the in-game playlist. But in order to advance, we look at your total team score with the teammates you select on GameBattles

The Top 40 teams from the In-Game Open Stage who registered on GameBattles and meet all eligibility requirements will advance to the Qualification Stage. 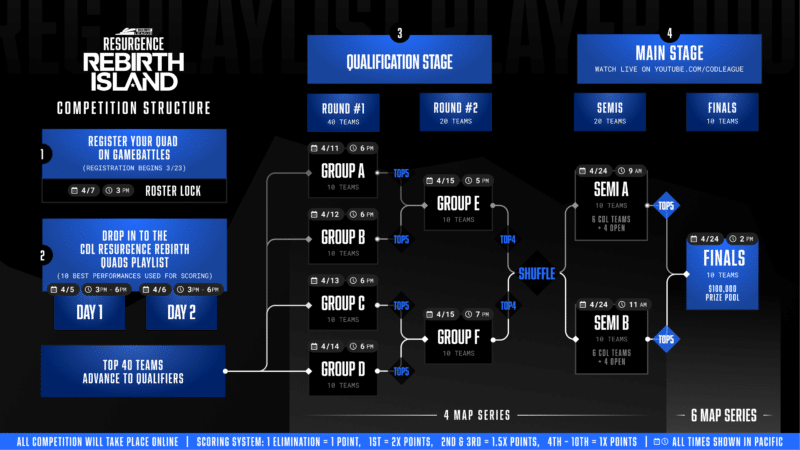 The top eight teams at the end of the qualification stage will advance. Facing the 12 Call of Duty League teams, with $100K up for grabs.