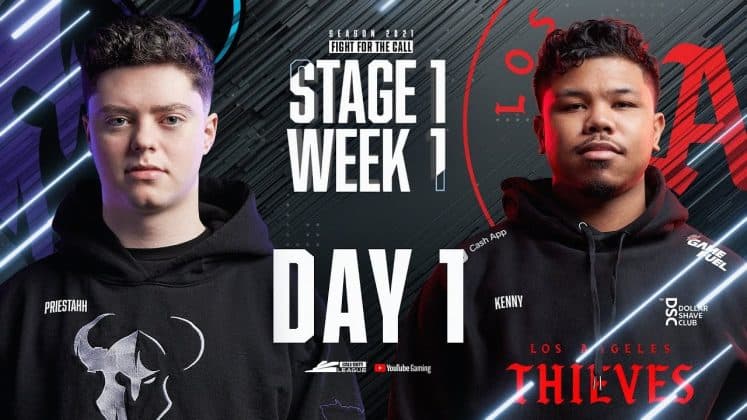 Here’s a recap of everything from the first day of the 2021 CDL Season.

Yesterday we saw the first Call of Duty League matches of the 2021 season. With some exceptional matches and our first 100 point clubs of the season, here’s everything that happened on day one.

In one of the most important matches of the group, LA Thieves took on Minnesota Rokkr. Attach came out swinging, with a 1.33 K/D in map one, dropping 32 kills. However, the rest of the Rokkr lagged behind in the slaying, allowing Kenny and Slasher to dominate with their 1.14 and 1.22 K/D’s respectively. The 250-194 scoreline could've been more dominant from the Thieves, but while Rokkr attempted a comeback, the Thieves held on for the win.

Minnesota Rokkr surprised nobody with this Search and Destroy win. Their 5-1 lead nearly crumbled, but Rokkr held on with 1.80 K/D’s from both Accuracy and Priestahh. Control swung the momentum back to LA Thieves, with a rare Garrison Control Attacking victory seeing them win 3-1. Temp was the start factor in this match with his 1.31 K/D and clutch play seeing him capture A in the final round.

LA Thieves completed the first 100 point club of the year winning 250-60 on Moscow Hardpoint to take the series 3-1. Yet another individual excelled with TJHaly putting up a monstrous 1.73 K/D. However, this was a complete team performance, with all LAT players putting up a 1.00 K/D or above.

The second 100 point club came in directly after the first. Although this wasn’t as dominant at 250-98, Dallas Empire completely ran through Seattle. Huke proved his talent once again with a massive 35-18 in Map 1, showing that he may be even more of a key player than he was in 2020.

Dallas continued their dominance in the Search and Destroy, winning 6-2 with ease. An exceptional turn on from Shotzzy showed the difference in class between the teams, and his 10-5 performance put Dallas 2-0 up in the series.

The momentum continued as Dallas Empire closed out the series 3-0 following a 3-1 Control win. Shotzzy performed once again with a massive 2.10 K/D, bringing the Empire through to a clinical 3-0, continuing their form from the 2020 Championship win.

The Call of Duty League continues, with three more days of action this week.