Pool B is chock full of talent at every level.

Pool B of the Call of Duty Championship provides a balanced group of teams that have all led different paths toward qualifying. Upsets are always in play when looking at a pool that does not have one overwhelming favorite, and the reality is that any team can lose on any given day. This is what makes the Call of Duty Championship so exciting. It is just as likely to see a lesser-known roster of players perform well, and the perennial favorites lose in the Group Stage. For this reason, watching as many matches as possible helps dictate exactly where each team stands heading into the Knockout Round. For Pool B, we have Gen.G, Enigma6, Team WaR and Fuego Gaming competing against each other to decide which two will make it out of their group. The Gen.G squad has been around long before Gen.G became their representative organization. First appearing under Str8 Rippin and then Team Space, Gen.G picked up this group of players and deservingly so. The current Gen. G roster includes Michael “MajorManiak” Szymaniak, Jared “Nagafen” Harrell, Colt “Havok” McLendon, Chance “Maux” Moncivaez and Dylan “Envoy” Hannon. With the exception of Envoy, the core of this roster competed alongside Mike “Spacely” Schmale beginning in December.

The previous Gen.G squad saw some early success under the guise of Team Space. After qualifying for the CWL Pro League, Gen.G acquired this team for the remainder of the season. Envoy would eventually replace Spacely on the active roster and the team produced consistent placements. From CWL Fort Worth on, the Gen.G roster would not fail to place outside top eight in any major tournament. Their two best performances were a second-place finish at both CWL Anaheim and CWL Pro Leauge Playoffs.

The team did not escape the drama that often comes along with professional Call of Duty. In June of this year, Spacely rejoined the roster in place of Nagafen for the final week of the CWL Pro League. The collective Gen.G roster subsequently dropped Spacely in favor of Nagafen. Citing better chemistry and teamwork, Gen.G moved on from Spacely in a much-criticized decision. Ultimately Gen.G finished the Pro League Playoffs second to eventual winners, eUnited.

Enigma6 has experienced ups and downs throughout the Call of Duty: Black Ops 4 season. After a sub-par T32 finish at the CWL Las Vegas Open, E6 would bounce back and ultimately qualify for the CWL Pro League in January of this year. The current roster of Jordan “General” General, Matthew “KiSMET” Tinsley, Adam “GodRx” Brown, Paul “Breszy” Breszynski and Mehran “Mayhem” Anjomshoa have only been a team since June.

It is difficult to judge exactly where Enigma6 stand as they gear up for the biggest tournament of the year. Undergoing a slew of roster moves never bodes well for any organization. Players like GodRx and General have competed at the Call of Duty Championship in past iterations, and their veteran presence may prove to be important for this roster. With E6 struggling on the tail end of this Call of Duty season, they will need to focus up for the final tournament if they hope to take down Gen.G. Since the beginning of the Call of Duty: Black Ops 4 season, Team WaR has undergone complete roster overhauls on more than one occasion. The organization experienced sub-par results until CWL Anaheim, where they would place T12. More roster changes took place after Anaheim, which breathed new life into the UK squad. In fact, coming out of the CWL Amateur Finals, Team WaR did not fail to impress. The team of Joshua-Lee “Joshh” Sheppard, David “Dqvee” Davies, Adam “Defrag” Mathews, Adam “Peatie” Peate and Stephen “Vortex” Allen dropped just one match en route to Winners Finals. Team WaR would eventually run into The Bhoys twice, losing to them both times.

MORE FROM ESTNN
CoD: Control Arrives to Vanguard in New Season One Update

Peatie and company surprisingly took the first series over The Bhoys in Grand Finals. Interestingly enough, this roster includes players who have all competed at a Call of Duty Championship in the past. This sort of experience goes a long way, especially when considering the pool of talent they will be competing against. It feels as though Team WaR is trending toward an upset at CoD Champs in some capacity. The UK roster simply has too much talent and experience to exit the tournament without a fight. Rounding out Pool B is yet another European organization by the name of Fuego Gaming. Much like the E6 and Team WaR, Fuego has only been teaming as a complete roster since just before the CWL Amateur Finals. The current Fuego Gaming roster includes Conor “BBConor” Beale, Callum “Chaaxter” Glanville, Billy “Hawqeh” Harris, Dylan “MadCat” Daly and Harry “Harry” Payne. It was a T16 finish at the Amateur Finals that would secure a spot at the Call of Duty Championship for Team Fuego.

The collective performance of the Fuego squad was less than stellar with just two series wins. Nevertheless, this roster has a player in MadCat who has been competing since 2011. In his career, MadCat has competed at the Call of Duty Championship several times with multiple T12 performances to show for it. That said, the European players tend to fly under the radar in competitive Call of Duty. There exists surefire talent on this roster and it will take a group effort if Fuego Gaming hopes to make it out of their pool. CoD: Control Arrives to Vanguard in New Season One Update 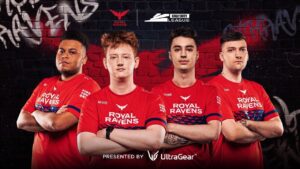 Fortnite Chapter 3: All Vault Locations & How To Open Them