The Celtics enter Game 6 with a lead in the series and they have a chance to clinch a spot in the NBA Finals with a win at home, but the Heat won’t give up and we expect an exacting game.

So, if you don’t want to miss this game, check our list of streaming options for the Heat vs Celtics Game 6.

The Celtics and the Heat showed us different faces in these NBA playoffs and especially in these series. That being said, the Celtics were the more consistent team and they deserved a chance to close the series out at home.

So, Game 6 of the Eastern Conference Finals will be played in Boston and you can watch the game on ESPN. But if you want to stream the Heat vs Celtics game online, or any other NBA game, check our list of top streaming options right here:

The Heat vs Celtics Game 6 will be broadcast by ESPN, which means that you can also live stream this game on ESPN app. You can download the app and use it for free, if you have a TV subscription that includes ESPN. Otherwise, you need to subscribe to ESPN live streaming service called ESPN +.

The best way for NBA fans to get additional NBA content next to live streaming of NBA games is the NBA League Pass. After all, this option gives you access to many different things, such as highlights and full-replays of latest games, classic NBA games from the league’s history, and NBA Studio TV.

While most people know about Hulu for their amazing content regarding movies and TV shows, they also have a live streaming service Hulu + Live TV which allows you to stream various sports events, including NBA games covered by ESPN, TNT, and ABC, but you won’t be able to watch NBA TV here.

The most complete streaming platform on our list when it comes to live streaming NBA games is YouTube TV. We say this because you can watch games broadcast by TNT, ABC, ESPN, and NBA TV with a YouTube TV subscription, which basically covers all the games in these NBA playoffs.

If you are looking for an affordable option to watch NBA games during these playoffs, FuboTV should be on the top of your list since they are probably the cheapest streaming platform you can find. That being said, you can only watch NBA games broadcast by ESPN and ABC with the basic FuboTV subscription, but you can pay a bit more if you want to add NBA TV to the mix.

Tyler Herro missed the last two games for the Heat and he is still listed as questionable for Game6, but both teams have been dealing with nagging injuries throughout these series. Still, with the exception of Herro, we should see all other players on the court, including Smart, Williams III, Lowry, and Butler, who all missed some time during the series. And if you want to place a bet on this game, don’t forget to check our top betting predictions for Heat vs Celtics Game 6. 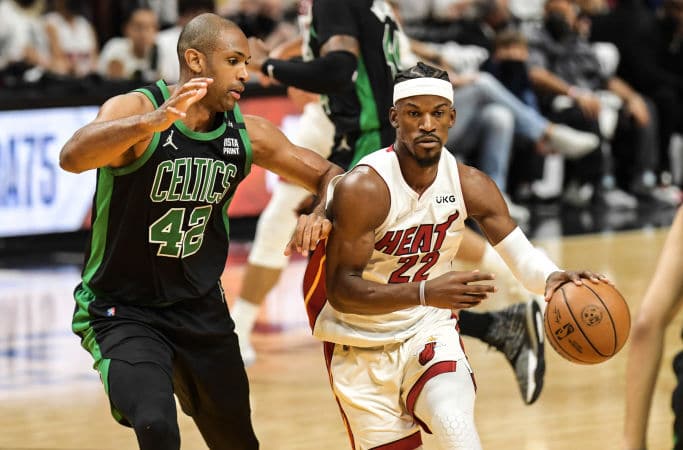 Boston Celtics are up 3-2 in the series right now.

The Celtics will host Game 6 at TD Garden in Boston.

Boston Celtics are a 9-point favorites for Game 6 of the series.

At this moment, Tyler Herro is still listed as questionable after missing the last two games of the series.

If you want to bet on Game 6 of the Heat vs Celtics Eastern Conference Finals, check our list of top bookmakers in the country: