Over 45 Vikings vs Bears

The Minnesota Vikings will look to prove that they’re not a fraud and that their recent success hasn’t been a fluke when they face an already eliminated Chicago Bears team. There’s no better setting to make a statement than going against a divisional rival who has been terrible in nearly every aspect of the game for most of the season.

The Vikings are coming off a heartbreaking loss to their lifelong rivals Green Bay Packers. Justin Jefferson was clamped and humiliated by Packers’ CB Jaire Alexander, and Kirk Cousins was back to Earth and showed again that he could not be trusted in any game that starts past 2:00 pm ET, for whatever reason.

Justin Fields has been the lone bright spot for the ever-struggling Chicago Bears. He got off to a slow start and was barely asked to throw the football early in the season, but he only got more comfortable as the campaign progressed, showcasing his ability to make big plays with his feet and wreak havoc out of the backfield.

So, the only good news for the Bears is that it seems like they’ve finally found their franchise quarterback. Other than that, they might want to put those NFL Draft picks to good use, as the roster is flawed, and they have plenty of room for improvement. Notably, a loss in this game could help them in that regard. 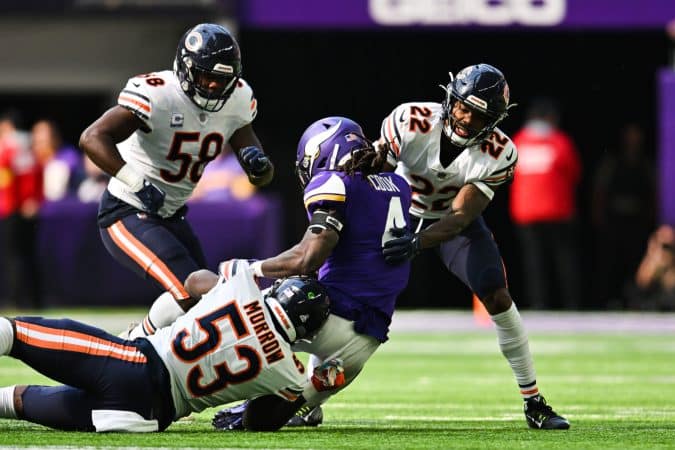 Justin Jefferson: Jaire Alexander manhandled Justin Jefferson so badly that he even shut down all his social media accounts. So, you know what’s coming. He’s fresh off breaking yet another Randy Moss record and will look to put that terrible performance behind him against a beatable secondary defense.

Justin Fields: As we already mentioned, there weren’t many good things about the Chicago Bears this season. But there was a point when Justin Fields looked like the best second-year quarterback in the league. So, he’ll continue to be a player to watch as he’ll have to grow through his mistakes and in real-life situations.

Week 18 Predictions: NFL Bet of the week on Vikings vs Bears

The opening Vikings vs Bears spread has the Minnesota Vikings favored by 5.5 points, and we’re talking about a team that’s on the road. That’s how much difference we’ve seen between these two squads this season, and it only means that the Vikings would be favored by double digits if this game were to be played in Minneapolis.

Some could be tempted to lean toward the home side here. Soldier Field’s blistering and wind could take a toll on the Vikings, as they’re used to playing in a dome. Also, regardless of their record, most insiders and analysts aren’t sold on the Vikings and only think of them as fake contenders that could be in for a tough awakening.

While we also think they’re nowhere near as good as you could tell by their record, the Vikings have still won 12 games this season, while the Bears only have three wins. Chicago has absolutely no business even trying to win this game and mess up their odds in the upcoming NFL Draft. It simply would make no sense.

The Vikings no longer have a shot at clinching the top seed in the NFC after getting beat by the Green Bay Packers last season, so motivation could be a factor here. But as we already mentioned, they’re looking to make a statement and prove their doubters wrong, not to mention Justin Jefferson could be a man on a mission.

The opening Vikings vs Bears odds have this game total sitting at 45 points. That would be a lot under normal circumstances, and we wouldn’t even consider leaning toward the over if this game were to be played a couple of weeks ago. But it’s the regular-season finale, so there’s big-play potential on every snap.

How so? Well, for starters, both teams are likely to give their starters a breather at some point. That could translate into multiple miscommunications, defensive miscues, and huge gains for the offense. These kinds of games always leave the door wide open for backdoor covers and games leaning towards the over.

More than that, we’ve already mentioned the Minnesota Vikings’ need to make a statement after getting humiliated by the Green Bay Packers. And before that terrible 17-point effort, they had scored 27, 39, 12, and 27 points. The Bears, on the other hand, have allowed 31,28, 25,35, and 41 in their five most recent games.

Justin Fields will look to close out the season on a high note with a couple of TD passes against a defense that will take a couple of plays off. And Kirk Cousins and Justin Jefferson will look to put up even more impressive numbers in the season finale, especially knowing their season might not last for much longer.

FAQs about Vikings vs Bears

No, the Vikings will make the playoffs.

Yes, they’re both from the NFC North.

Yes, you can find them on our NFL picks today page.

Check out our NFL odds page to get them.

Head to our player props page to get the best props for this week.