The European football season is pretty much over, which means that we’ve got a transfer window and a couple of months of action before the Qatar 2022 World Cup begins. With that in mind, if you want to get ahead of the crowd and pick up some early bird prices then now is the time to move. That’s the very reason we’re looking at World Cup betting offers right now.

What markets can you bet on?

When you’re several months out from Qatar 2022 it’s quite natural that World Cup betting discussions focus on the bigger picture markets. There are numerous different layers you can tap into and most – if not all – of them can be used in conjunction with the World Cup betting offers the bookies are putting together. So, what sort of events can you bet on? Who will win the World Cup?

Brazil currently leads the bookmaker odds and it’s clear to see why. They’ve got a host of attacking talents in their ranks with the likes of Neymar and Vinicius Junior the particular standouts in the final third. They’re no mugs defensively either with Casemiro likely to be marshalling the midfield ahead of Marquinhos at centre back and Liverpool keeper Alisson in between the sticks.

Beyond them, you’re looking at England and Spain. Spain had an underwhelming tournament in Russia in 2018 but finished third at Euro 2020 – which was played in 2021 – whilst England were semi-finalists in the previous World Cup and lost on penalties in the final of the most recent European Championships.

If backing a tournament winner sounds like something you’re interested in then why not use one of the many World Cup betting offers out there; BetVictor is offering new customers that wager £5 an extra £30 to play with. £20 of that bonus money is split as two £10 sportsbook bets; this means you could cover two of the three favourites in the World Cup betting with free bets and still have £10 worth of slot bonus to play with. Oh, and you’ll have your initial fiver to stake on a qualifying bet of your choosing.

Another place you can use your World Cup betting offers is in the Golden Boot market. The Golden Boot is awarded to the player that scores the most goals throughout the World Cup finals. There are multiple names in the running to do so; we’re going to call out a few along with a dark horse or two as well.

At the front the top scorer, betting is England man Harry Kane; he has 49 goals in 69 games for his country. Kylian Mbappe and Karim Benzema are the highest-ranked names for France; they’ve both been in crazy hot form throughout this domestic season with a combined 80 goals between them at the time of writing. The two names completing the five favourites are the duo that dominate the ‘GOAT’ debate, Lionel Messi and Cristiano Ronaldo. Ronaldo has continued to showcase his goal-scoring ability this season with 24 goals for Man United. Messi meanwhile has only hit six goals in Ligue 1 for PSG, however, he did fire Argentina to Copa America glory in 2021.

Now for the dark horse bets. We’re calling out Sadio Mane and Darwin Nunez of Senegal and Uruguay respectively. They are the team’s main men, both have a track record of finding the net and their nations are outside bets to make a run to the latter stages.

With this market a hard one to predict, we’d suggest utilising one of the World Cup betting offers that gives you multiple free bets to use; Betfair is currently offering a tiered offer that can see you net five £20 free bets. That could give you a serious head start on World Cup betting by covering five different top scorer selections!

Who will make the last eight?

World Cup betting markets vary between bookies but a few are offering outright markets on which teams will make the quarter-finals; you don’t have to predict everyone either – you can just back a team to reach that stage. The likes of those we mentioned as potential winners have short odds here; although, that being said, the probability of winning increases too so they might still offer value. For us though, the real bets of interest here come from backing some lesser fancied sides.

We’ve mentioned two already in Senegal and Uruguay. Senegal has just won the African Cup of Nations and has an elite spine to their team in Edouard Mendy, Kalidou Koulibaly, Idrissa Gueye and the aforementioned Mane. Uruguay meanwhile boast experience and youthful talent in equal measure; Nunez, who we mentioned earlier, is one of the latter along with Federico Valverde whilst Luis Suarez, Edinson Cavani and Diego Godin meet the ‘experienced’ tag. Another dark horse is the US; Christian Pulisic, Gio Reyna, Tyler Adams and Sergio Dest are four players who know what it takes to play against top opposition.

What World Cup betting offers are the best for this market? Probably Bet365; they’ll give you up to £50 in free bets when staking £10 – although this is actually phrased in their small print as a ‘five times’ multiplier subject to a minimum first bet of £5 i.e. if you bet £5, you’d get £25 in free bets but you can bet anything up to £10 and benefit from the multiplier. If you are following the bookies odds then the Netherlands is going to win the group. We, however, think that Senegal represents huge value given what talents they have in their squad. Don’t get us wrong, Holland aren’t a bad side but their odds-on price is hardly enticing; you could, of course, use an offer like that on offer from William Hill that gives you two £15 free bets when you bet just £10 and covers both. The likelihood of neither topping the group is an almighty stretch.

Let’s cut to the chase, this group should be a doddle for England to navigate through. We’ve touched on the US earlier in this article and whilst they might make it through with the Three Lions the idea of anyone but Gareth Southgate’s men clinching the top spot feels unlikely. From a World Cup betting offers perspective, the short odds mean that a hefty free bet stake might be wise; Coral is offering exactly that with £20 free being thrown your way when betting just £5.

We can discount Saudi Arabia from this group; they’re going home. In reality. Poland and Mexico are vying for the second spot, which means Argentina are our pick to finish in the first place. The bookmakers agree with that theory. With the bet unlikely to be particularly exciting in itself, may be an offer where you have more than one freebie to play with will appeal. 888Sports fits the bill with the structure of their World Cup betting offer being three £10 free bets when you bet £10; the fact they throw in an extra tenner for their casino is also a perk worth noting.

Our World Cup betting predictions now turn to Group D and, quite frankly, there is only one team topping this pool; that’s France. The holders have a strong squad throughout but they really are stacked for quality up top with the likes of Mbappe and Benzema. Denmark is worth a mention in that group too but it would be a turn up for the books if the Danes were to topple France for the top spot. Like in Group B, using one of the World Cup betting offers that comes with a bigger reward might be worth considering; Unibet tick that box with an offer that refunds your stake up to £40 if your pick loses; it’s worth noting you are subject to a minimum £10 stake. You will, however, get a £10 casino bonus as well.

If Group D is easy to predict then you cannot say the same about Group E. In fact, it might be the toughest of the World Cup betting selections you have to make from a group wagering perspective at least. Spain and Germany are the two sides that we need to separate and whilst we lean towards Germany as our pick it’s possibly worth using a bookmaker that splits your deposit bonus. Why not check out the offer from William Hill. They are currently offering new customers £30 in free bets (paid as 2 x £15 bets) when depositing and staking £10.

This group is an odd one. In many ways, the World Cup betting odds are right in that Belgium and Croatia should advance to the next phase of the tournament, however, there are arguments that can be made to explain why those teams aren’t exactly the bankers they seem; a big one would be that a lot of the star players on both rosters are beyond their prime. With a potential shock on the cards, you could go bold on one of the lesser fancied sides here; we’d lean to Morocco. If that appeals then Paddy Power are offering to refund first bets as cash up to the value of £10!

There will be no prizes awarded for guessing who leads the World Cup betting in this group; it’s Brazil, obviously. The three teams joining them here though is intriguing with little between the three of them. That said, it will be a case of who joins Brazil. The Selecao are much fancied to go all the way in the tournament so, of course, we too expect them to win this group with relative ease. Considering that, backing them to win with a sizeable free bet offer might be the smartest move to make; Unibet are currently giving new customers a £30 free bet when they deposit and bet £10.

We’ve arguably left the hardest group to predict until last because every team in this group will fancy their chances of going through. Portugal leads the betting courtesy of a star-studded lineup that is headlined by Ronaldo. Uruguay we’ve already touched on as a dark horse whilst Ghana are no mugs and South Korea boast the world-class attacker that is Son Heung-Min, which means they’ll have a punchers chance in any game. With it so hard to call, a free bet package from Ladbrokes that gives you four £5 free bets would let you cover every outcome. It’s an option to ponder for sure and, odds wise, there isn’t a better group to cover all bases in. 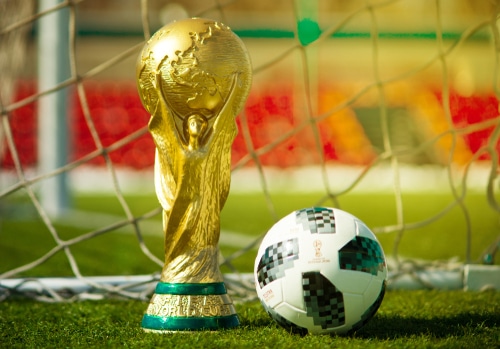 Can World Cup betting promos only be used on outright markets?

No, most free bets will be eligible for match betting too. Always check the terms and conditions to be sure though.

When does the World Cup start?

Who are the favourites to win the tournament in the World Cup betting odds?

Brazil is the current favourite.

How many teams will be at the World Cup?

32 nations will start the group stage.

In the World Cup betting odds who is the favourite to win the Golden Boot?

* Betting odds and promotional terms and conditions are subject to change. Always check with the bookmaker before betting.

As you may be aware, there are quite a few remaining qualifying games to see which teams will make it to the UEFA 2022 World Cup. And as you can see, one of these remaining games is the clash between Scotland and Ukraine. This match is scheduled for June 1st, and if you fancy a […]