The Tennessee Titans (7-4) look to avoid a losing streak as they take on the Philadelphia Eagles (10-1), who still own the best record in the NFL. The Titans lost to the Bengals at home as they were unable to avenge their playoff loss from last January. The Eagles scored a season-high 40 points and dropped 500 yards on the Packers last Sunday night.

Both teams would love to run in this one, but Derrick Henry has averaged 2.78 yards per carry over the last three games. They have to find a way to get him going, especially since run defense has been one of the few areas where the Eagles are not elite.

But the Eagles just rushed for 363 yards on Green Bay and will try to keep it going against a stout Tennessee run defense that has held most teams in check save for the Giants in Week 1 (238 yards). Is it going to be another NFC East team running wild on the Titans? The Titans have a good history as an underdog under head coach Mike Vrabel.

The NFL Week 13 odds have the Eagles as a 4.5-point home favorite with a total of 44.5 points. What’s going to happen in the A.J. Brown Revenge Game after the Titans oddly traded their young, stud receiver to the Eagles on draft day?

Players to watch in the Titans vs. Eagles game

Austin Hooper: Wide receivers have really struggled with the Eagles this year, so the Titans may need to stick to the ground game and throw to the tight ends more. Hooper had two touchdowns against the Packers in his best game this season. He has at least 30 yards in four straight games and could be a solid prop bet in this one.

Jalen Hurts: He is second in MVP odds behind Patrick Mahomes and Hurts just became the first quarterback to rush for 125 yards and pass for 125 yards in the same half in NFL history. But can he keep running this much? Hurts has 33 carries the last two weeks, the first two games without tight end Dallas Goedert available in the passing game. 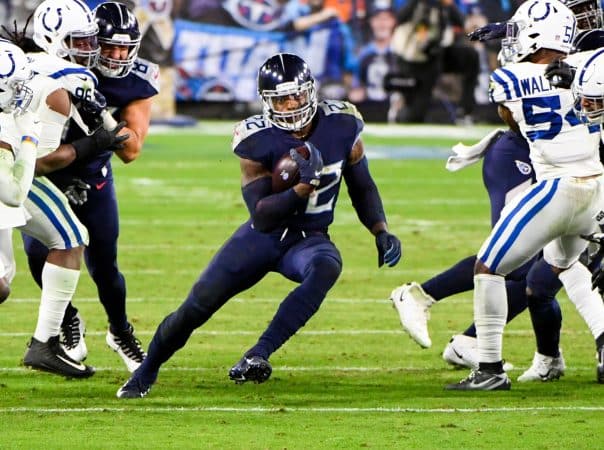 Our Best NFL Bets for the Titans vs. Eagles game

We have two NFL Week 13 predictions for this interesting non-conference matchup.

The weird thing about Washington beating the Eagles in Philly is that they did it the way you would have predicted Tennessee could end the undefeated season for this team. They stuck with the run even if it wasn’t that effective. They were great on third down, hitting 12-of-15 to start the game. They got multiple turnovers on defense from a Philadelphia offense that barely turned it over this year.

That is really the formula for Tennessee, except you like some of the pieces better for the Titans like Henry and Ryan Tannehill instead of Washington’s backfield and Taylor Heinicke. Tannehill has been sharp lately with three straight games over 250 yards passing as rookie wideout Treylon Burks develops.

The Titans have only allowed one team (Buffalo) to score more than 22 points this season. If they can somehow keep that streak alive against a Philadelphia team that scored 17 in Indy and 21 at home against Washington, then they will be right in this game and possibly even win it.

The Titans usually play the type of run defense that can contain Miles Sanders and the other backs but Hurts on those scrambles can be deadly. If they can win the turnover battle (Titans are No. 4 in fewest turnovers), then this should be a tight one again.

Vrabel has been incredible as an underdog. He is 12-6 SU and 14-4 ATS as an underdog of at least 4 points. The Eagles should win at home since they have more talent and can score better, but I will take the Titans with the points.

Our NFL bet of the week in this game is that A.J. Brown delivers in his first game against his former team. The trade has worked out beautifully for the Eagles, who have newfound glory in the passing game with Hurts taking his game to another level thanks to Brown.

Meanwhile, we see a lot of limitations in this Tennessee offense without Brown. The trade definitely wasn’t going to help them get better in 2022, so it was an odd time to do it while they still have Henry in his prime.

Brown has been a bit quiet, possibly nursing a little injury, over the last four games where he has not surpassed 60 yards. But even without him going over 60 yards since Week 8, he has scored a touchdown in two of the last four games. He has a touchdown in 5-of-11 games here. He usually comes through in the big games, and this has to be viewed as a big game for him.

Trust Brown to score at least one touchdown against a Tennessee defense that has allowed 19 touchdown passes and only three touchdown runs. So, this may be the week to avoid playing the Miles Sanders or Jalen Hurts score and go with Brown.

Frequently asked questions about the Titans vs. Eagles game in Week 13

The game is being played at Lincoln Financial Field in Philadelphia, Pennsylvania.

You should always read our player prop picks and daily NFL predictions.