The Tennessee Titans (7-7) are collapsing with a four-game losing streak, but they just have to beat the Houston Texans (1-12-1) to get back on track. Unfortunately, they’ll have to do it again without Ryan Tannehill, who injured his ankle in Los Angeles. He returned to finish the game, which was probably a mistake, but he is out this week, if not longer.

Rookie quarterback Malik Willis already started against Houston back in Week 8 for an injured Tannehill. He did almost nothing in the game, accounting for 52 total yards on 18 plays. The Titans earned a 17-10 win by riding Derrick Henry, who is better against the Texans than arguably any player in NFL history has been against one opponent.

Here are Henry’s last four games as a rusher against the Texans:

How crazy is that? No other running back in NFL history has more than three games in their career with at least 200 rushing yards and two rushing touchdowns. Henry is the King of Kings when he faces Houston, and the run defense has never been worse than this year.

However, the Texans have been playing some inspired football in recent weeks, nearly upsetting the Cowboys and Chiefs despite being an underdog of 17 and 14 points in those games. Houston’s defense is doing a better job, and after seeing Willis once this season, they should feel more confident about selling out to stop Henry by any means necessary.

Players to watch in the Texans vs. Titans game

Jerry Hughes: The wily veteran leads the defense with 8.0 sacks, and he had one against the Titans in Week 8. It is the most sacks he has had in a season in eight years since he was in Buffalo. The Titans do not expect to put the ball in Willis’ hands often in this one, but a few big sacks could go a long way in making a difference here.

Chigoziem Okonkwo: The tight end they call “Chig” may not be a household name since it’s a hard one to remember to spell, but he is delivering for the Titans as a fourth-round rookie. Since Week 9, he has 20 catches for 322 yards, which would put him on a 17-game schedule pace of 49 catches for 782 yards – pretty strong for a rookie. He had a season-long 48-yard catch on a screen from Willis against the Chiefs. Look for him to be  a bigger factor this week than he was in Week 8. 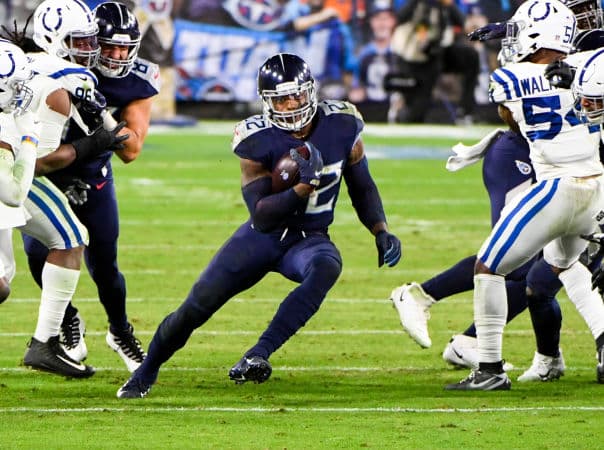 Our Best NFL Bets for the Texans vs. Titans game

We have two NFL Week 16 predictions for this AFC South rematch.

The Texans vs. Titans spread opened with the Titans as a 3.5-point home favorite. Some sportsbooks have made it much tighter than that, but you can find Texans +3.5 at most going into the weekend.

Week 8 matters in the sense that it showed Henry, who missed both Houston matchups in 2021, can still run all over the Texans. Though, they already knew the run defense was a big problem this year. What they didn’t know was what to expect of rookie Malik Willis in his first start. Turns out it wasn’t much, and Willis’ second start in Kansas City was similar with the offense gaining one first down on the final nine drives as the Chiefs found their way back to win in overtime.

Willis is going to rely heavily on Henry, so that should make things easier for the Houston defense, which has played better in recent weeks.

But the big difference here is that the Titans can no longer rely on the defense to be great. It has been a rough month on that side of the ball with quarterbacks frequently throwing for 300 yards and putting up points. The Texans aren’t built to do that, but they can be more effective than they were in Week 8 when just getting to 100 passing yards took more than 58 minutes.

For a 1-win team, Houston has been hard to blow out. The Titans aren’t blowing anyone out to begin with, so this should be naturally close. But Houston did so much right against the Cowboys and Chiefs only to be outdone late in the game by two great offenses and quarterbacks. That’s not the case with the Titans this week.

We’ll take the Texans to cover and possibly even add on to Tennessee’s losing streak for your NFL bet of the week.

In the last two weeks, Henry has rushed for just over 100 yards with a touchdown in both games. That is a lot better than the previous two games when Henry had 38 and 30 yards on the ground and no scores.

But just rushing for 100 yards and a touchdown would actually be a letdown for Henry against Houston, his personal play toy. We showed the numbers above, and Henry could go for a fifth-straight 200-yard rushing game against Houston.

However, we think this is a great opportunity for the Texans to step up and contain him better with the Titans not having any threat in the passing game. Still, even if the Texans hold Henry well below 200 yards, his chances of scoring a touchdown are incredibly high in this game. It’s not like Willis has good receivers to throw to, or that the Titans will even want him throwing in the red zone.

The odds on Henry’s anytime touchdown look like a good value pick given how likely he is to cash it. Feel confident in him doing so but do have little confidence in his ability to go for 200 yards again. Enough is enough already. Someone on Houston has to step up and slow him down.

Frequently asked questions about the Texans vs. Titans game in Week 16

You will find them at our player prop picks and daily NFL predictions.