The Pittsburgh Steelers (4-7) are looking to get their first winning streak of 2022 as they take on the Atlanta Falcons (5-7), who are just trying to stay in the NFC South race.

The Steelers are 14-2-1 all time against Atlanta, and this has been one of the more exciting non-conference matchups that takes place once every four years since realignment in 2002. The first three meetings in that time all went to overtime, including a 34-34 tie in 2002.

We bring up some offensive games because these two defenses have both allowed a league-high 45 pass plays of 20-plus yards this season. The Falcons are not big on passing and the Steelers have a rookie quarterback in Kenny Pickett, but there are decent skill players on both sides and this could turn out to be a fun one.

The Steelers just had their first fourth-quarter comeback win of the season and of the Pickett era in Indianapolis on Monday night. The Falcons lost 19-13 in Washington after an inexplicable decision to pass on second-and-goal led to a tipped interception. The Falcons just placed tight end Kyle Pitts on injured reserve, so his season is over.

The NFL Week 13 odds have the Steelers as a 1-point road favorite with a total of 42.5 points.

Players to watch in the Steelers vs. Falcons game

Najee Harris: After leaving Monday night’s game with an abdominal injury, Harris is expected to play. He has looked better since the bye week with three touchdowns in the three games, and he was over 90 rushing yards in consecutive games before the injury on Monday. The Atlanta run defense is nothing special and Harris should look to continue his turnaround run this weekend.

Cordarrelle Patterson: He is the NFL’s Swiss Army Man as he can beat you on kick returns where he has the most touchdowns (nine) in history, he is a capable receiver, and he has proven to be an effective runner. The Steelers have done a solid job against the run this year, but Patterson is still Atlanta’s most dangerous skill player and he has a good chance to find the end zone again in this one. 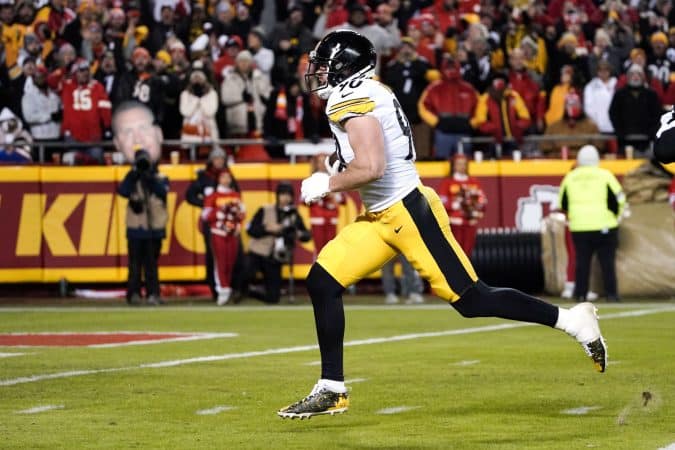 Our Best NFL Bets for the Steelers vs. Falcons game

We have two NFL Week 13 predictions for this usually exciting non-conference matchup.

The Steelers vs. Falcons spread opened with the Steelers as a 1.5-point road underdog. The line has moved around from the Steelers being a 1-point favorite or to a true pick’em. You could just take the moneyline at -110 odds on Caesars for this one.

Pittsburgh’s three worst games this season have all been against offenses that exposed their secondary with an MVP-caliber quarterback having his way with them. Think Josh Allen in Buffalo, Jalen Hurts in Philadelphia, and Joe Burrow in Cincinnati.

The Falcons do not have that type of offense with Marcus Mariota, who barely throws the ball and lost one of his best weapons (tight end Kyle Pitts) to injury. The Falcons love to run, but Pittsburgh has done a respectable job against the run all year. Mariota is also prone to taking awful sacks and holding the ball too long, which T.J. Watt and company can pounce on when the Falcons decide to throw.

On the other side, Atlanta’s defense also usually looks worse when teams decide to throw on the secondary. Pittsburgh has shown it is not afraid to throw the ball with Kenny Pickett, but he has been more careful with the ball since the bye week. Zero turnovers for the Pittsburgh offense in the last three games. The Steelers have also scored at least 20 points in three consecutive games for the first time since late in the 2020 season.

The Steelers seem to be getting on the right path with Watt back on defense and Pickett protecting the ball better. They have a better coach and roster than the Falcons, and they should win this game. We’ll go with the Steelers to get their first win streak of the year for your NFL bet of the week.

Remember to stay up to date with our NFL picks page for more betting tips.

These are the two worst defenses at allowing explosive plays (20-plus yards), so it is very tempting to take the over in this matchup. The game will be indoors, so the Falcons won’t have to worry about the rainy conditions that have plagued a few of their recent games against the Commanders and Panthers.

The Steelers’ mix of a balanced attack with the run game finally working and the turnovers finally under control make them a great candidate to score over 20 points in this game. Pittsburgh’s two highest point totals of the season (30 and 24) have come in the last two weeks, so things are trending in the right direction.

The Falcons are still an above-average scoring team for the season, and they did recently play a 27-24 game with run-heavy Chicago, so it does not take a lot of passing for this team’s games to hit over 43 points.

Atlanta is No. 11 in third down offense and No. 30 in third down defense, a good combo for keeping the score up on both sides. The Falcons have also scored at least 23 points in all home games except for the Chargers (lost 20-17).

Let’s go with another wild entry into the Steelers-Falcons series history. We’ll take the over to hit.

Frequently asked questions about the Steelers vs. Falcons game in Week 13

The game is being played at Mercedes-Benz Stadium in Atlanta, Georgia.

It sounds crazy, but Pittsburgh has been a road underdog in 16 straight games, the team’s longest streak since the 1970 merger. The last time the Steelers were favored on the road was Week 15 in Cincinnati in 2020. They lost 27-17 as a 14.5-point favorite. With the final line to be determined in this game, it could extend the streak or end it.