The Pittsburgh Steelers and Cleveland Browns enter this game with matching 1-1 records after playing four games decided by a total of nine points. Things have been tight this year, but the Browns have had the better of their two games, only to blow a lead in incredible fashion to the Jets last week. The Browns led by 13 points with 1:55 left, but the Jets were able to manufacture two touchdowns with an onside kick recovery in between.

Quarterback play is obviously a big hurdle for both teams this year with Mitch Trubisky replacing retired Ben Roethlisberger and Jacoby Brissett keeping the seat warm until the suspended Deshaun Watson can be reinstated.

But Trubisky is struggling to move the offense as he ranks 24th in QBR. Oddly, he ranks right in between Tom Brady and Aaron Rodgers, but no one expects their slow starts to continue. Trubisky is about one bad game away from seeing the bench in favor of rookie Kenny Pickett.

Brissett has not been great, but his much better second game has him up to 12th in QBR at ESPN. The offense for Cleveland played very well against the Jets. The team just failed to close in a way only befitting of the Cleveland franchise. But the Browns can drop the Steelers to 1-2 with a big win here on Thursday night.

The NFL Week 3 odds have the Browns as a 5-point home favorite in this matchup, but divisional games can always be the most unpredictable.

Players to watch in the Steelers vs. Browns game

Najee Harris: Pittsburgh’s running back is off to a very slow start and may be playing hurt, but Cleveland was one of the few defenses he ran great against last year. Harris had a touchdown in each matchup and a career-best 188 rushing yards in the last meeting. Can the Steelers get him going on the road this week?

Amari Cooper: The star wideout had his first touchdown and 100-yard game for the Browns against the Jets. He needs to dominate in this game the way Jakobi Meyers and Nelson Agholor attacked Pittsburgh’s secondary on the road on Sunday. The Browns brought in Cooper for games like this and he needs to deliver. 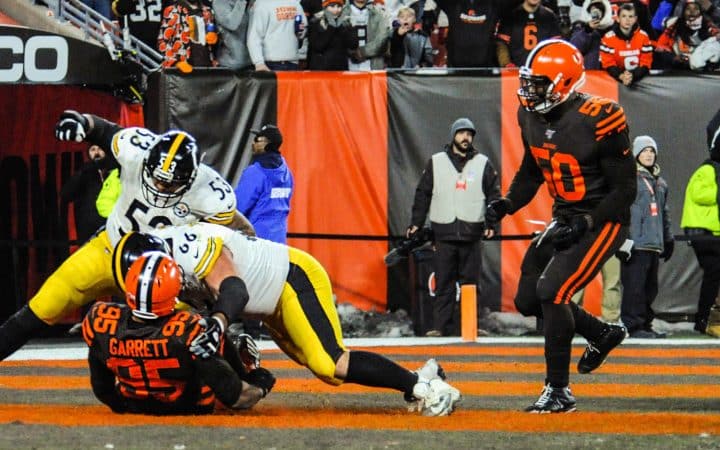 Our Best NFL Bets for the Steelers vs. Browns game

We have two NFL Week 3 predictions we want to share for this game as the Steelers battle with their hated rivals from Cleveland.

The Steelers vs. Browns spread opened with the Browns as a 3.5-point home favorite. It keeps moving up to 4.5-to-5 points in Cleveland’s favor.

If the spread keeps moving towards a full touchdown, I may have to change gears and take the Steelers, because this game should not be that high scoring, which makes it likelier to be close at the end.

But it is hard to win a game with such a hampered offense like Pittsburgh has. The other major problem is T.J. Watt’s pectoral injury that will keep him out of this game. The Steelers have not won a game without Watt the last two seasons. They could not get a sack of Mac Jones on Sunday without Watt in the lineup, and they only forced one takeaway.

Meanwhile, Cleveland is going to be without Jadeveon Clowney in this game, but Myles Garrett is still there as he looks for his first Defensive Player of the Year award. We know Garrett has it out for Steelers quarterbacks, and he would love nothing more than to dominate in a prime-time game against the hated rivals from Pittsburgh.

Cleveland has a great opportunity with Garrett going up against this offensive line to cause havoc and cover the spread. The only question is do we see Kenny Pickett after this game or after the bye week?

Always be sure to read our NFL picks page for more betting tips.

The Steelers vs. Browns odds set the total at 38.5 points. It is a low number for any NFL game in 2022, but these teams played a 15-10 game last season in Cleveland with a better quarterback for both teams. Throw in the short week and general Thursday night malaise, and this could be a real dogfight between teams that do not like each other.

Since 2019, the year Pittsburgh’s offense started taking a turn for the worse, the over is 9-16-1 (37.5%) in games where the Steelers are on the road. With the Steelers averaging 15 points a game on offense and the defense missing T.J. Watt’s ability to force turnovers, a high point total does not feel likely for the Steelers.

But the Browns are not exactly built to run away with things with Brissett at quarterback. With scoring down around the league this year to 21.5 points per game, the under still feels like the right NFL bet of the week for this AFC North battle.

Frequently asked questions about the Pittsburgh vs. Cleveland game in week 3

The game will be available to stream on Amazon Prime, the new home of Thursday Night Football.

Be sure to keep up with our player prop picks and daily NFL predictions.