Over 48.5 Seahawks vs Chiefs

Patrick Mahomes and the Kansas City Chiefs will look to continue silencing their doubters when they host the Seattle Seahawks in what could be the most exciting game of this weekend’s slate. Both teams still have work to do ahead of the postseason, even if the Chiefs have already clinched a spot.

The Seattle Seahawks have gone flat after an impressive start o the season. Nonetheless, and even though they won’t win their division, they still have a big shot at making the playoffs as a Wild Card team. Nonetheless, they’ll likely need to win out the season to do so.

Needless to say, that’s not a position you want to be in when you visit Arrowhead with just a couple of games left in the campaign. However, Pete Carroll has proven to be one of the most competent head coaches in the league, so you better not count them out.

On the other hand, the Chiefs will look to make a statement and keep putting on pressure on the Buffalo Bills. They can still finish the season as the first seed in the AFC, so there’s still more than enough motivation to be at their best even despite having secured a playoff spot already. 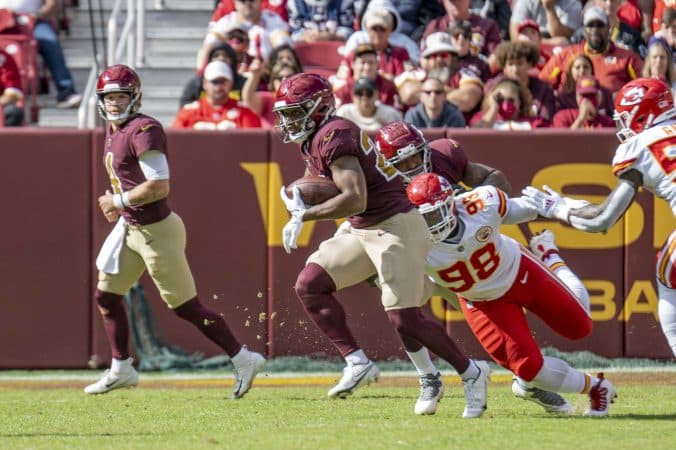 Patrick Mahomes: Well, this one’s pretty self-explanatory. Patrick Mahomes is arguably the most spectacular player to watch in the NFL. He’s a magician with his no-look passes and makes throws no one else in the league can make, not to mention his ability to scramble.

Geno Smith: Geno Smith’s feelgood story could become a thing of the past. He’s been way too aggressive over the past month or so, and it seems like defenses have finally figured him out. But then again, he’s surprised us throughout the whole campaign, so he may have another ace up his sleeve.

Week 16 Predictions: NFL Bet of the week on Seahawks vs Chiefs

The opening Seahawks vs Chiefs spread have the visitors as 9.5-point underdogs, which only speaks volumes as to how bad they’ve looked over the past fou weeks. But more than that, it’s just another example of how overvalued the Kansas City Chiefs are on a weekly basis.

Patrick Mahomes and the Chiefs always seem to find ways to win games, even when they’re behind on the scoreboard. Nonetheless, it’s not like they’ve always covered the number, being one of the less-profitable teams when we talk about betting against the spread.

The Chiefs are a team you can always bank on to get the win, not the cover, especially when we’re talking about more than one touchdown. Even if this game is at home, they may not be hungry enough to keep their foot on the gas for the full 60 minutes.

Moreover, we’re talking about a Seattle Seahawks team that cannot afford a setback on their trip to Missouri. Pete Carroll’s team needs to head back home with the win if they want to keep their postseason hopes alive, so they’ll be overly aggressive and take plenty of risks.

The opening Seahawks vs Chiefs odds have the two teams with a projected game total of 48.5 points. That definitely makes sense, considering they’re both offensive-oriented and not precisely known for their dominant and physical defensive units.

We’re talking about the highest-scoring offense for the Chiefs with 29.6 points per game, while the Seahawks sit at the seventh spot with 25.4 points per contest. Also, they rank 19th and 29th, respectively, in points allowed per game.

These two quarterbacks won’t hesitate to put pressure on the safeties and cornerbacks, slinging the ball down the field on every single drop back. And both teams have explosive playmakers that could make something out of nothing and put up points in the blink of an eye.

FAQs about Seahawks vs Chiefs

We don’t know, but check out our player props page to find out.