Congratulations to the Seattle Seahawks (9-8) for securing the final spot in the NFL playoffs as the NFC’s No. 7 seed. Their reward is a trip to San Francisco, a 13-4 team that has won 10 in a row and is 2-0 against Seattle this year, holding Geno Smith’s offense to 13 points in eight quarters.

They say it is hard to beat a team three times in a season, which is true. But it is not true if you have already made it two-thirds of the way home. Teams going for the 3-0 sweep of a division rival in the playoffs are 14-9 (.609), so it does happen more often than not.

Unfortunately, the last team to fail at this was the 49ers last year against the Rams in the NFC Championship Game. That game was the third time in his last three postseason appearances where a Kyle Shanahan-coached team blew a double-digit lead in the fourth quarter.

The 49ers are also trying to become the first team in the Super Bowl era to get to the big game with a rookie quarterback in Brock Purdy, who has been stellar. While rookies are 0-for-56 at getting to the Super Bowl, it is hard to say anyone has ever had a better situation than the one the 49ers have put him in:

We’ll see how the rookie fares the first time he sees a defense twice, but he can tie Justin Herbert for the rookie record by throwing multiple touchdown passes in seven straight games.

The NFL wild card odds have the 49ers as a 9.5-point home favorite with a total of 42 points.

Players to watch in the Seahawks vs. 49ers game

Tyler Lockett: The veteran wideout has caught at least eight touchdowns in five straight seasons, and he had his first 100-yard receiving game against the 49ers in 15 tries earlier this season. Lockett has had at least 68 yards in 4-of-5 games against the 49ers going back to 2020. The Seahawks are going to have to find points in the passing game, and Lockett is their best shot in this matchup.

George Kittle: Can anyone stop him now that the 49ers have unleashed him? Kittle has four touchdowns in his last two games against Seattle. Kittle had 11 touchdowns this year, which is as many as his two best seasons combined in his career. Purdy has really loved finding him for big YAC plays that lead to scores. He is as likely as anyone to score this week and should be a great value pick. 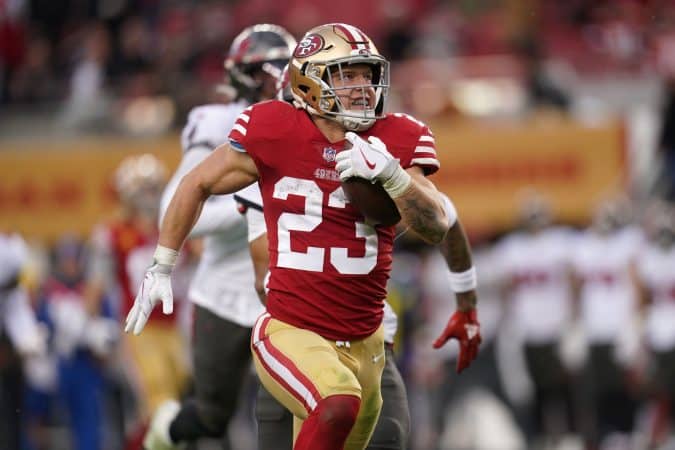 Our Best NFL Bets for the Seahawks vs. 49ers game

We have two NFL wild card predictions for this NFC West matchup for the third time this year.

The Seahawks vs. 49ers spread opened with the 49ers as a 10-point home favorite and it has moved up to 9.5 or stayed steady going into the weekend.

That 27-7 win by the 49ers in Week 2 was the first time since 2011 that the Seahawks lost by double digits to the 49ers. A lot of that had to do with Russell Wilson’s excellence over the last decade, but Geno Smith had a very good, legitimate Pro Bowl season for the Seahawks. It is reasonable to say he is better now than he was in the first month of the season.

Pete Carroll is also an old-school defensive coach who has seen everything, and he is the only coach to hold the 49ers under 33 points in their last six games since Purdy took over. The Seahawks aren’t going to be surprised by the things this offense does. It’s just a matter of this defense tackling and keeping the game within reach. Confusing the rookie quarterback after getting film on him will be crucial for the Seahawks.

But the 49ers should win the game as their run defense is too good. They haven’t allowed a 70-yard rusher all season, so don’t expect Kenneth Walker to log a fourth 100-yard game in a row. That will make Smith have to carry the load and create points, and while he has some good wide receivers, the 49ers have not allowed big plays to this offense in two games. Smith is averaging 5.88 yards per pass against the 49ers this year. That won’t get the job done on the scoreboard to win, but his lack of turnovers is encouraging enough to think he’ll find a way to get a cover, even if it requires coming through the backdoor. Take the Seahawks to cover.

This is the first Geno Smith playoff start, but in 2022, the Seahawks have actually scored the second-most first-quarter points (97) in the league. The problem is they have also allowed the fourth-most points (85) in the first quarter. Worse, there are four games where they were outscored by 6-plus points after one quarter and two of them were against the 49ers.

The famous Kyle Shanahan script of plays to start games usually leads to good things for the 49ers, who have outscored teams 81-64 in the first this year.

Trusting a Shanahan team with a double-digit lead in the fourth quarter of a playoff game is tricky, so if you wanted to stay away from the 60-minute result, then trusting the 49ers to start well could be a good value pick for your NFL bets of the week.

The game is being played at Levi’s Stadium in San Francisco, California.

Three of San Francisco’s four losses have come against teams that finished with double-digit losses: Bears (3-14), Broncos (5-12), and Falcons (7-10).