The New Orleans Saints are one of three 5-9 teams in the NFC South after beating Atlanta last week. The Cleveland Browns (6-8) beat the Ravens, 13-3, to improve to 2-1 since Deshaun Watson took over at quarterback, but two offensive touchdowns in 12 quarters is not what the team had in mind.

The NFL Week 16 odds have the Saints as a 3-point road underdog, but it is the total of 32 points that is getting the attention here. The last NFL game with a total of 32 points was in Week 17 of 2009 between the Bills and Colts in the snow with the Colts expected to rest starters for the playoffs. It ended 30-7 to hit the over.

You have to go back to December 2008 to find a game with a lower total, and that was played in Cleveland against the Bengals with a total of 31.5 points. The Bengals intercepted a pass for a touchdown early and won 14-0. It was cold and windy, which will be the case this Saturday combined with possibly some snow.

Neither team is eliminated yet from the playoffs, but they are both longshots. We’ll see which offense can get it done better.

Players to watch in the Saints vs. Browns game

Alvin Kamara: We’ll see what excuse the Saints have to not use Kamara more this week. He is averaging 53.4 rushing yards per game, his lowest since his rookie season. He also has just three touchdowns, which were all scored in the win over the Raiders. The Browns have really struggled against the run this year, so this would be the right matchup to use him more, but the Saints seem stumped on this one.

Nick Chubb: This has to be a big Nick Chubb day in the bad weather. Chubb had 99 yards against the Ravens last week and would have gone over 100 had they needed another first down at the end of the game. Chubb has not scored a touchdown in the three games since Watson started playing quarterback. That drought needs to end here. 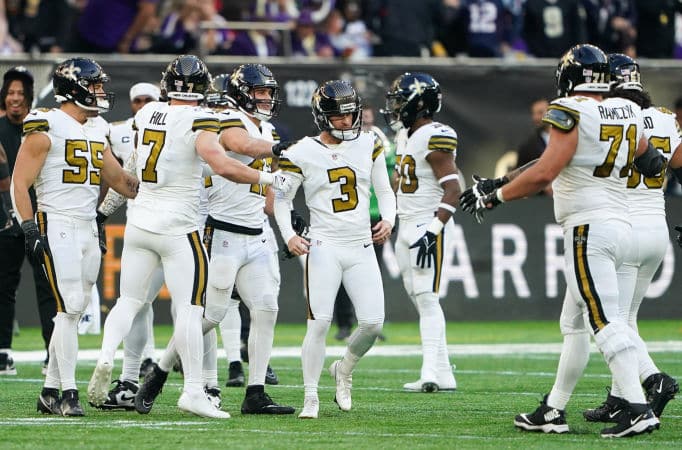 Our Best NFL Bets for the Saints vs. Browns game

We have two NFL Week 16 predictions for one of the last matchups this year between the AFC North and NFC South.

The Saints vs. Browns spread opened with the Browns as a 3-point home favorite. It has stayed consistent going into the weekend.

As a dome team, New Orleans certainly has a history of coming up small in bad weather games on the road over the years. On the plus side, Andy Dalton is no stranger to playing in bad weather or in Cleveland as he used to visit annually as a member of the Bengals.

Dalton is 12-5 against the Browns with better stats than usual, though he has not faced the version of the team coached by Kevin Stefanski yet. Most of Dalton’s best games have been at home this year too. On the road, the Saints have been shut out 13-0 in San Francisco and lost 20-10 in Pittsburgh. Myles Garrett can provide pressure on Dalton as he leads the team with 13.5 sacks.

The Browns have more elite players on their roster than the Saints, and they are better than their 6-8 record. The defense has held three of the last four teams to no more than 17 points. We are just waiting to see more from the offense, but at least Watson is not turning the ball over at a high rate.

But this Saints team is ass-backwards. The Saints are 4-2 when they allow more than 145 rushing yards this year and 1-7 when they hold teams under 145. It’s usually the other way around, and that 1-7 record is the worst in the league in that split. Meanwhile, the Browns are 0-5 when they do not rush for 140 yards this year.

The Browns are home in the elements against a dome team, they are playing well on defense, and they have a better sense of what their identity is, even if Watson is struggling to fit into the offense. Trust Chubb and Garrett to lead the way on both sides and get the cover and win for your NFL bet of the week.

We rarely see totals this low in the NFL anymore, but this week looks different with brutal cold weather sweeping through the nation. Besides this low of 32 points in Saints-Browns, we also see very low totals in Texans-Titans (35.5) and Falcons-Ravens (34.5).

That makes for three games with a total no higher than 35.5 in Week 16 if things close at these numbers. There has been just one such game in the last 10 seasons.

Fifteen of the last 22 games with a total below 36 points have gone over. But these teams seem uniquely qualified to hit the under. The Saints have been involved with three shutouts in their last 18 games.

The Browns just played a 13-3 game, their 11th game under Stefanski since 2020 that finished with no more than 32 combined points.

With neither team reliably proficient at throwing combined with the expected conditions, this could be a 17-13 or 20-10 game in the end. We’ll take the under and see how it turns out for Cleveland with Watson seeking his first game with multiple touchdown drives.

Frequently asked questions about the Saints vs. Browns game in Week 16

The Jaguars-Jets game to start Week 16 on Thursday night was the 12th game in the 2022 NFL season with a total under 38.5 points. The under is now 9-3 in these games this season.