Well, the Cincinnati Bengals (11-4) were declared AFC North champions on Thursday night after the league announced it will not resume the Bills-Bengals game. That means the Baltimore Ravens (10-6) are a wild card team even though they technically could finish with the same number of wins as the Bengals thanks to sweeping them.

It is a tricky situation after the Damar Hamlin cardiac arrest tragedy on Monday night. The Bengals can take solace in the fact that first responders did a fantastic job with Hamlin and the hospital is giving him great care to recover. He should be able to pull through, so the Bengals should get a boost of confidence from that good news.

If these teams meet in the playoffs, a coin flip reportedly could decide home-field advantage. Again, this is unprecedented territory, but the fact is the Ravens and Bengals are two teams heading in opposite directions since their last meeting, a 19-17 win by the Ravens in Week 5.

We still have no idea if Lamar Jackson will play again for the Ravens this season. They have not scored more than 17 points in the five games since he was injured. The Bengals are scoring often these days and look as good as any team in this AFC field to get back to the Super Bowl again.

Players to watch in the Ravens vs. Bengals game

Mark Andrews: Remember when he caught touchdowns often? Andrews has not scored a touchdown in nine straight games after scoring five times in six games. Not all of this is on the quarterback change as Jackson was still the quarterback for nearly half of this drought. But Andrews did catch all nine of his targets for 100 yards against the Steelers. This team just isn’t finding him in the red zone anymore.

Tee Higgins: Arguably the best No. 2 wideout in the NFL, let’s hope Higgins is in a good place with his mental health as he was the player involved on the tackle that led to Damar Hamlin’s collapse on the field. It was a routine play, Higgins did nothing wrong, so hopefully the good news for Hamlin’s recovery has Higgins feeling good this week. He is a great talent. 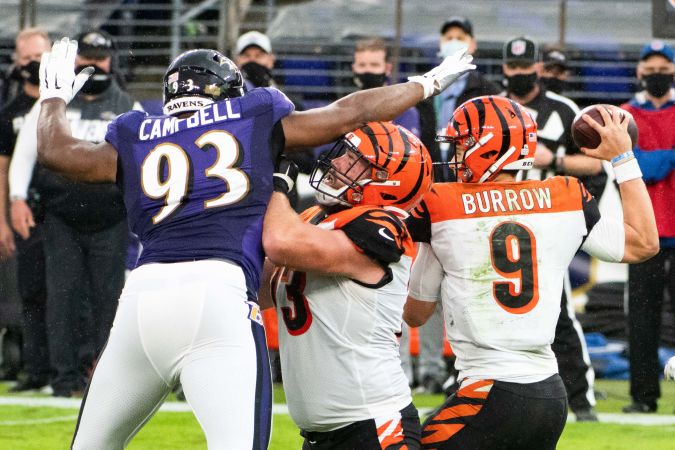 Our Best NFL Bets for the Ravens vs. Bengals game

We have two NFL Week 18 predictions for this AFC North battle.

The Ravens vs. Bengals spread opened with the Bengals as a 7-point home favorite and it has gone up a half point at some sportsbooks.

It has been an emotionally-draining week already, and finding out the Bengals win the AFC North on a Thursday night without completing a game this week is a surreal experience.

Does Cincinnati rest starters now that they know the division is locked up? Do they try for the No. 2 seed knowing it will take a Buffalo loss to the Patriots (unlikely) for that to happen? Does it even matter if you win the AFC North or No. 2 seed if the league is talking about doing a coin flip to determine home-field advantage?

This is the uncertainty we are facing right now. But the Bengals are clearly the better team than the Ravens at this point of the season. The Ravens have only lost one game by more than a touchdown this year, and it was that awful 13-3 performance in Cleveland a few weeks ago when even Justin Tucker missed some field goals. The Ravens left many points on the field in that one.

The Bengals lit up the Ravens twice last year with Joe Burrow throwing for well over 400 yards in both games. He was not nearly as successful in Week 5 this year, and the Ravens limited the big plays and generally have been playing good defense. But most of the offenses they have been playing are lousy down the stretch. The Bengals have great receiving talent and they are healthy with tight end Hayden Hurst finally back too.

This is a tough spread to predict because of all the circumstances clouding this game. I would not recommend making this a top NFL bet of the week as you look for winners in the final week of the regular season. There are better games than this one, but we’ll cautiously back the Baltimore side here just because of the defense and familiarity with the opponent.

A better pick for this game should be the under. It was 19-17 the last time they met, but the Baltimore offense is doing much worse these days. In fact, the last five Baltimore games have not exceeded 30 points. You have to go back to the 2006 Broncos (six games) to find the last time an NFL team had a streak that long of games under 30.5 points.

The Bengals are a sneaky good defense too, so they can hold this limited passing game to few yards and explosive plays. The running game for Baltimore is very good at times, but the Bengals are not abysmal against the run.

I think Buffalo beats New England anyway, so these two teams may not want to show much since this very well could be the No. 6 at No. 3 matchup in the wild card round a week later. That’s why the under should be a great pick as these teams may just want to rush through this game without much excitement and get ready for a playoff matchup.

Will Lamar Jackson be around for that one? Who knows at this point, but the Bengals are the better team going into the playoffs.

Frequently asked questions about the Ravens vs. Bengals game in Week 18

Since 2019, the Ravens are only 11-12 ATS in AFC North games. It is a tough division with plenty of hard-fought battles between the teams.

Keep up with our player prop picks and daily NFL predictions.