The Cincinnati Bengals (12-4) will be facing the Baltimore Ravens (10-7) and their third different quarterback this year in Sunday night’s AFC wild card matchup.

Huntley is less mistake prone than Brown, who helped the Ravens to a season-high four turnovers last week in a game you can throw away, but Jackson would still be the best choice. Unfortunately, his knee injury appears too severe for him to come back in the postseason.

So, it is going to be Huntley in the biggest game of his life. He played a little in Baltimore’s last playoff game, a 17-3 loss in Buffalo in the 2020 season, after Jackson was concussed late in the game. But in his last seven major appearances for the Ravens, Huntley has not been able to lead the team to 20 points, and the Ravens are 3-4 in those games.

The Ravens will have to rely on a steady dose of defense and running game to have hope in this one, but it looks like a daunting task as the Bengals are 10-1 since losing to Baltimore in Week 5. It is clear which team is better unlike in Week 5 when the Bengals were 2-3 following a slow start.

The NFL wild card odds have the Bengals as an 8.5-point home favorite with a total of 40.5 points.

Players to watch in the Ravens vs. Bengals game

Mark Andrews: This is now or never for Andrews, who has not caught a touchdown since Week 6. But he did catch all nine of his targets in his last game for 100 yards against Pittsburgh with Huntley as his quarterback. The two had a decent connection in 2021 too. The Bengals are going to get some points, so the Ravens will need contributions in the passing game to keep up, and no one is better to do that than Andrews.

Tee Higgins: Lest we forget this is an AFC North rivalry, the Bengals did not take kindly to Roquan Smith’s big hit on Higgins last week. Words were shared, and these teams will be going at it again this week with bigger stakes on the line. Higgins is a great No. 2, but he has had several health scares this season, and he was the player involved in the tackle with Damar Hamlin. But he can hopefully take solace that he did nothing wrong on the play and Hamlin has recovered incredibly well. Look for Higgins to give it everything he has this weekend as the Ravens try to deal with Ja’Marr Chase too. 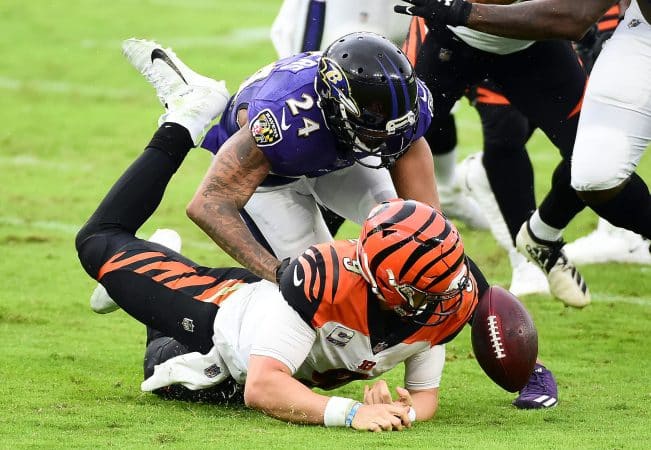 Our Best NFL Bets for the Ravens vs. Bengals game

We have two NFL wild card predictions for this heated AFC North rematch.

The Ravens vs. Bengals spread opened with the Bengals as a 6-point favorite, and it has moved as high as 11 points, and looks to be settling in at 8.5 points going into the weekend. This movement is driven by the quarterback issue as the Ravens have been expected to start everyone from Jackson to Brown to Huntley, but it is going to be Huntley on Sunday night even if he is not 100%.

This is another tough call this weekend because the Ravens have only lost by more than 8 points twice this season (three times in their last 27 games), but the last two were road divisional games. But last week never felt like a real game with the Ravens resting Huntley, Andrews, and J.K. Dobbins, their best tight end and running back.

For as bad as Brown and the offense played last week with 16 points on 15 drives, they only lost by 11 points. They held the Bengals under 300 yards for the second time this season, and they gave up a fumble touchdown to boot. Joe Burrow’s numbers were way better last year against an inferior Baltimore defense to this improved unit that can stop the run and create takeaways.

With a better quarterback and Andrews and Dobbins back in the lineup, it is not unreasonable for the Ravens to score a few more points in this game. The Bengals are one of the best offenses in the league, but they have been held in check twice by this defense that knows them well.

The Bengals should win the game, but the Ravens have the experience and defense to keep this within reach and cover in a 24-16 type of game. Take the Ravens to cover, but Bengals to win the game.

Be sure to visit out our NFL picks page for more betting tips.

We suggested the 24-16 score before noticing you can get the Ravens’ team total at over 15.5 points. This feels like a good NFL bet of the week given that the Ravens are usually scoring about that much, and they just scored 16 last week in an ugly game where they had twice as many turnovers as they had in any game this season.

It wasn’t pretty, but the Ravens had 386 yards of offense last week, their sixth most in a game this year. The Ravens have scored at least 16 points in all but four games this year, and they have done it in every road game except the 13-3 loss in Cleveland where they left a ton of points on the field in their worst performance of 2022. Even the great Justin Tucker missed multiple field goals that day.

Tucker won’t miss two this week. Despite the lack of playoff success for the Ravens in the last decade since winning Super Bowl 47, you still have a tough out in John Harbaugh, who will come prepared for this one. He made the right move to rest key starters last week and the offense should welcome back Andrews and Dobbins. Gus Edwards might play too, so there will be no shortage of running backs for this offense.

Trust the Ravens to put up 16 points in this one.

Frequently asked questions about the Ravens vs. Bengals game in the wild card